The expected time lag between when New Zealand begins hiking official interest rates and when Australia does is set to be the longest lag in over 20 years, ANZ economists say

Bonds
The expected time lag between when New Zealand begins hiking official interest rates and when Australia does is set to be the longest lag in over 20 years, ANZ economists say 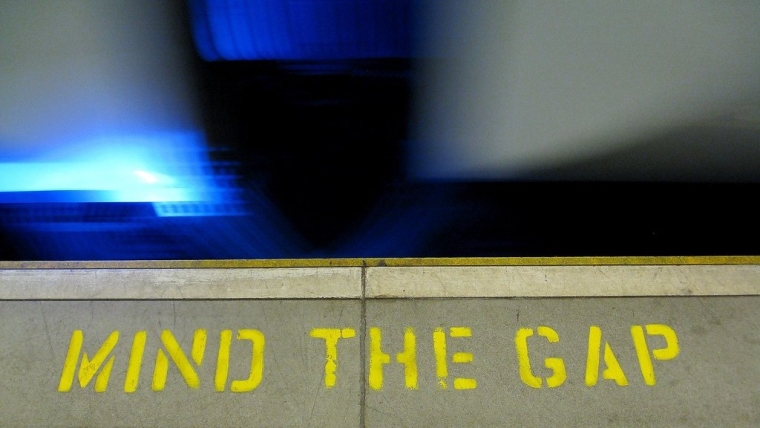 ANZ economists say the time lag between when official interest rates start rising in this county and when they are hiked in Australia is likely to be the longest in over 20 years.

And they say the size of the gap in those official interest rates may reach as much as 165 basis points in the second half of 2022 - with NZ's rates being the higher ones.

"For the RBNZ [Reserve Bank of New Zealand], the risk of ‘going it alone’ is that the [NZ dollar] could head skywards as global investors rejoice in a positive low-risk return on their money.

"Such a move would feed back into the RBNZ’s economic outlook and challenge at least some of the rationale for rate hikes," they say.

"For the RBA [Reserve Bank of Australia], the risk is that investors may be more likely to decide it is behind the curve, which could prematurely tighten monetary conditions.

"We’ve already seen RBA market expectations on occasion shift in response to hawkish RBNZ rhetoric – a case of the tail wagging the dog. Though at present the surge in Covid cases is dominating pricing in Australia."

They say a gap of as much as 165bps between the official interest rates in the two countries would by no means be unprecedented. In July 2007 the gap reached 200bps

"Over the last 20 years there has at times been quite large gaps between the RBNZ’s and RBA’s cash rates; but there has generally been a close correlation in terms of the direction, with the cycles broadly in sync," the economists say.

"What stands out in our current forecasts is the size of the lag between the RBNZ’s and the RBA’s first hikes." 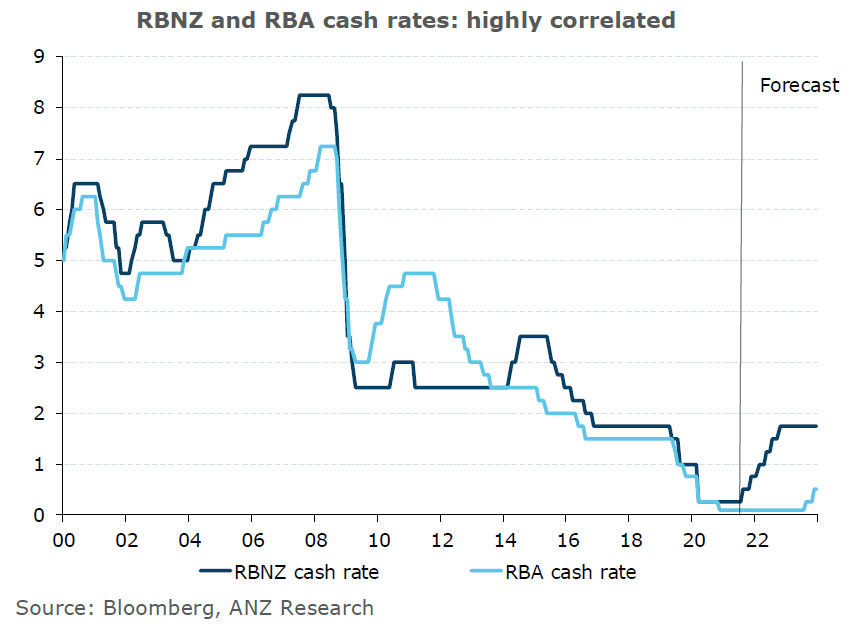 At 24 months - with the expectation being an NZ start in August 2021 versus August 2023 for Australia, the current lag would be the longest since 2000.

But the economists say that just because the timing gap is expected to be so long this "doesn’t mean the forecasts are wrong".

They point out that the RBNZ has started "a cycle" ahead of a move by the RBA three times since 2000 (ignoring the 2010 hike that was quickly reversed after the 2011 Christchurch quake).

"Of these, only the post tech-wreck/Sep-11 rate hike in early 2002 provided a leading signal on the RBA’s next move," Zollner and Plank say.

"While both Australia’s and New Zealand’s economies are facing shipping disruptions, labour shortages and other cost-push factors driving inflation up (as well as strong housing markets), there are also idiosyncratic factors.

"It is not out of the question, for instance, that the RBA follows an August rate hike by the RBNZ with a decision to delay the tapering of bond purchases scheduled for September because of Australia’s current pandemic lockdowns. Such a decision would represent an easing in policy relative to the RBA’s currently intended settings."

But the economists do say that "this near-term wrinkle in the policy outlook aside", the risks do seem weighted towards convergence in the timing and/or the magnitude of the gap.

"For example, the RBA may well end up tightening earlier than either we or it expects, or the RBNZ may end up with a very stop-start tightening cycle compared to our forecast if the New Zealand economy stutters or the NZD soars."

With the New Zealand and Australian economies being buffeted by such similar forces, it is natural to ask whether they can both be right, the economists say.

"Certainly, the risks do seem to be skewed to the gap not widening as much as we, and the two central banks, currently expect. Who’s right is going to depend, like so many things in markets these days, on the persistence of the current inflation shock.

"Should it turn out that the inflation shock fades as unsustainable growth drivers dissipate, the RBNZ could find a very stop-start cycle is in store. And of course a large negative shock could see rates cut again.

Are we going to have another push at dollar parity?

I hope so, could be the most exciting thing for NZ ever, don't think its ever been parity, its been very very close. We can then start printing Aussie Dollars !!!! YAY

Thoughts on ASX ?
Any good ones to look out for ?

Is ANZ now saying all this to cover the possibility that their bullish outlook on interest rate rises may be a little over done?

Look, if our bank economists are not going to reject current failed economic theories and ignore past methods of economic prognostication, then they deserve all the contempt they attract. To assist them, I have done some historical research myself:
https://www.mentalfloss.com/article/585258/historical-divination-method…

The positive differential between NZ and Aus is literally a measure of the free money that NZ is willing to give Australian banks. Amazingly, economists working for said Australian banks are talking up the gap. Imagine that.