Banking analysts outline how they believe the big banks have been overstating their profits, enabling the over paying of dividends and erroneous benchmarking of executive bonuses

Bonds
Banking analysts outline how they believe the big banks have been overstating their profits, enabling the over paying of dividends and erroneous benchmarking of executive bonuses 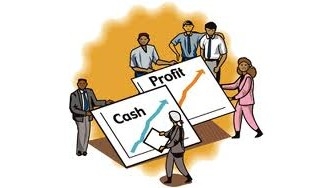 Are the Australian parents of New Zealand's big four banks perhaps not quite as profitable as we thought?

"Post accounting standard revision in 2002, the cash profit metric became a creature of bank management's own creativity. It is neither reliably measurable, nor is it auditable," the Citi analysts say.

"We remain concerned with the treatment of 'below-the-line' (excluded from cash or underlying profit) items by the banks," the UBS analysts say. "We view this (ANZ's NZ simplification project, see more on this below) as another example of earnings management. IT projects and acquisitions were signed off by management. The costs are capitalised on the balance sheet. Then, prior to amortisation, they are written-down, below-the-line, never to appear through the P&L (profit and loss account) in 'cash' or underlying' profit."

The big four Australasian banks posted combined cash profit after tax of A$24.2 billion (about NZ$30.6 billion) for the 2010-11 year, up 11.5% on the previous year. So far this year only CBA has reported annual results with its cash profit up 4% to a record A$7.1 billion.

NAB & ANZ the worst offenders with A$15.2 billion at stake

Both the UBS and Citi analysts finger NAB as the worst culprit, followed by ANZ.

The UBS analysts do note that banks aren't alone in reporting profits the way they do, with many companies across all sectors doing it.

"However, we believe this analysis highlights the boards’ and auditors’ tendency to allow more expense/loss items (by both number and value) to be taken below-the-line than revenue/profit items. This becomes significant over time leading to an overstatement of delivered earnings and return on equity, and potentially an overpayment of dividends and management remuneration," Mott, Williams, and Lee say.

They also argue this behaviour could potentially constrain distributable earnings, and therefore dividends, in the future.

In June the UBS analysts revealed analysis of all “below-the-line” items by the big four banks since 1997. This showed 113 “one-off” items taken below-the-line excluding what they describe as “accounting noise” such as Treasury shares and hedge ineffectiveness.

And the trend hasn't slowed, with NAB booking 16 items below-the-line over just the last three years.

Renewing the UBS analysts' wrath last week was ANZ saying a A$224 million gain on the sale of the bank's Visa shares would be used to fund a review of asset valuations, including capitalised software. This, combined with the final costs of its New Zealand simplification programme, would offset the Visa gain, ANZ said, with these items to be taken below-the-line, therefore being excluded from cash or underlying profit.

The simplification programme includes moving the ANZ and National banks onto one IT platform, at a cost of at least NZ$221 million, a move expected to go live in late October.

"ANZ has a long track record for this kind of accounting. We believe this leads to questions about both: 1) the underlying cost pressures ANZ is facing, and 2) the conservatism of its accounting practices," the UBS analysts say.

"Efficiency and productivity initiatives are a core part of the New Zealand simplification programme intended to drip productivity gains through over coming periods. ANZ is taking these restructuring costs below the line, with the cash P&L taking no additional costs for the upside."

The Citi analysts point out the cash profit metric was devised by ex-CBA CEO David Murray in 2000 as a net profit after tax measure excluding appraisal value movements in holding companies such as life insurance operations, and "abnormal items."

Aside from "cash profit" becoming "a creature of bank management's own creativity,"  both the Basel II and incoming Basel III global banking standards require the regulator, the Australian Prudential Regulation Authority (APRA), to deduct an ever increasing array of items from profit under the Australian version of International Financial Reporting Standards (IFRS) before arriving at the Tier 1 common equity ratio, thus making  the cash profit metric "even less relevant."

Williams, Nason and Minton have defined a capital leakage ratio, being the proportion of so-called cash profit that doesn't result in the generation of Tier 1 common equity, before transactions with owners and capital investments.

"The higher the ratio, the more so-called cash profits are effectively lost," the Citi analysts say. "We argue that a better metric for bank earnings is a measure which captures all of this capital leakage. We call this measure RAP - Regulatory Adjusted Profit."

They say recent capital leakage suggests organic capital generation can support balance sheet growth of as little as 2% for NAB and Westpac, 4% for CBA and 5% for ANZ, with all below current Australian system credit growth. In the year to July total loans and advances across Australian financial institutions grew to A$1.9 trillion, or by 6.1%, according to the Reserve Bank of Australia.

"As recent (dividend) payout ratios against RAP have been 85%, this suggests an ongoing reliance on dividend reinvestment programme issuance is likely, particularly with organic growth capacity below system credit growth," the Citi analysts say. 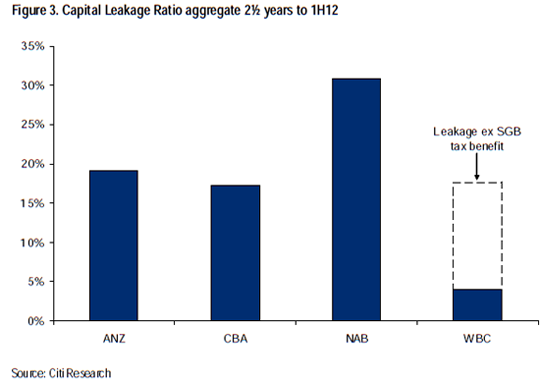 *The "leakage ex SGB tax benefit" line in the chart above refers to the tax benefit from Westpac's acquisition of St George Bank.

Citi's Williams, Nason and Minton say NAB has the poorest track record with consistent "below-the-line" adjustments. RAP has been about 30% less than NAB's "cash profit", from which variable executive remuneration is set, with dividend payments set at "unsustainable" levels.

"NAB has paid out 100% of Common Equity Tier 1 capital generated in the past 2½ years as dividends and capital generation (has been) most modest, with organic growth capacity of 2% per annum based on recent capital leakage performance."

More broadly Citi's analysts point out in recent years 17% of "cash profits" never flowed into bank capital. Much of the capital "leakage" has been represented by management's "below-the-line" items and mark-to-market balance sheet movements which aren't captured in "cash profits".

"Which raises questions on bank dividend and remuneration policy. Banks commonly set dividend policy on a 'cash' basis. Both NAB and Westpac also set senior executive remuneration in part on 'cash' earnings metrics. It's possible that ANZ and CBA do too, though this is not disclosed. We believe that management teams should be remunerated on regulatory capital generation, best measured by RAP, to properly align their interests with those of shareholders." 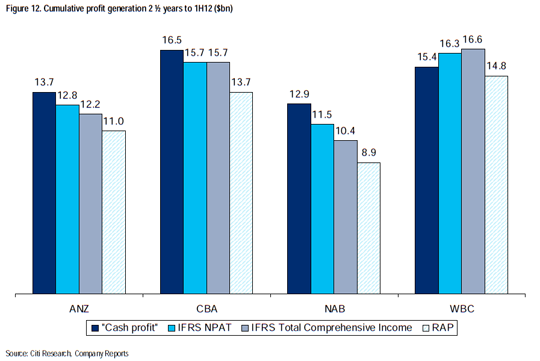 The three major sources of capital leakage are cited as APRA adjustments including capitalised software and regulatory expected loss deductions, "business as usual" and other items management exclude from cash profits with these almost always loss items in aggregate, and a range of mark-to-market movements IFRS records as "other comprehensive income" such as foreign currency translation reserves and available for sale securities movements.

And given that from a shareholder's perspective banks operate to generate a return to them such as through dividends and to grow the business, all bank management teams should be compensated based on their ability to generate regulatory capital rather than cash profit, Citi argues.

"Unlike cash profit, RAP is a calculation based on independently determined accounting and regulatory capital standards over which bank boards, management and remuneration consultants have no input." the Citi analysts add.

Are we the Pacific harvest field?

the ocr is not a true reflection of profitablility. 3yr swap rates for NZ and AUS are 2.85 & 3.05 a gap of 20bps. funding costs of the australian parents are atleast 30bps cheaper, hence the parent would be more profitable.

Having worked internally at such companies and in manufacturing this is exactly how you manipulate data to provide false profit.  I think it's ethically wrong, yet quite fruitful.

My favourite is 'discontinued operations', where you take out the rubbish and say it was someone elses decision to having had it as part of the company.  That way you disguise your year's of mismanagement - and getting paid handsomely at the same time.  Genius.

Deliberately misleading the unsecured depositors by under capitilising the lending asset base to over pay staff and shareholders - is this an accusation that can be safely laid for the scrutiny of the respective boards of the mentioned NZ subsidiaries of these banking institutions?  Where is the regulatory division of the RBNZ in all this? Are they playing a role?

Under OBR, shareholders are the first to bear the bank’s

losses, followed by its subordinated debt holders. If there

are any remaining losses, these are then allocated to the

bank’s unsecured creditors, including its depositors. A

proportion of each unsecured creditor’s funds would be

frozen (and therefore inaccessible) based on a conservative

assessment of the potential for losses by the failed bank.

Whilst there are differences between different classes of

unsecured creditors, they all have the same legal claim on

the bank. Each has freely invested in a private institution and

has enjoyed a return on that investment whilst accepting

the risks associated with the investment.

Now I wish to freely move my deposited money away from institutions that were up to this point covertly trying to undermine the financial safety of my life savings and all the while engaging in a two tiered risk borrowing scheme (covered bond issuance), offering secured lending to some johnny foreigner investor or is that to a foreign branch of the same bank further ruining my unsecured savings value.

But to where? Will the new RBNZ Governor take his position seriously and chime in on behalf of the taxpaying/depositing public that underwrite his salary?

Well that scares the cr*p out of me.  What does one do now?

Under the OBR scenario millions of kiwis are expected to trot down to the bank, pick up a copy of the bank's financial disclosure document, assume it is accurate and not distorted, apply their innate accounting skill to it, and make a reasoned decision on realative risk. Yeah right!

All it does is absolve everyone of responsibility if things go wrong. Management, RBNZ and Government claim "buyer beware".

Seem to remember Fannie Mae and Freddy Mac being busted about ten years ago for "massaging" annual figures. Nothing happened from the regulators or politicians(huge political contributors to Congress) and look what happened a few years later, while the whole time the executives kept paying out big bonuses.

All this stuff plays to the PM's stated philosophy of "See no evil, read no evil, speak no evil" or Bollard's disclosure that he didn't want to raise questions in public about NZ's financial system that might cause markets to react negatively.