Growth in year to March 2013 won't be as good as previously thought due to higher NZ$ and weak exports, NZIER consensus forecasts show

Currencies
Growth in year to March 2013 won't be as good as previously thought due to higher NZ$ and weak exports, NZIER consensus forecasts show 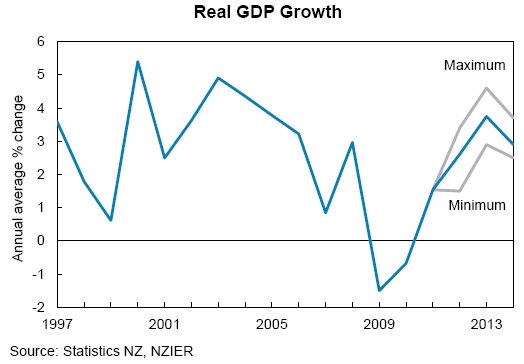 Economists are more optimistic in September than they were in June about growth in the current year to March 2012, but less optimistic about the economy the following year as export growth is weaker than expected due to a high New Zealand dollar and a weaker global outlook.

Consensus forecasts released by the New Zealand Institute of Economic Research showed the New Zealand economy would be resilient in the face of global risks, with rebuilding in the Canterbury region driving economic growth despite a later than expected start to the rebuild.

"Economic growth will average 3.1% over the next 3 years. The recovery is being supported by growth in residential construction, led by the Canterbury rebuild. Without that, growth averages 2.7%," NZIER said in a release.

"Household spending growth will be steady, rather than accelerate, and public sector spending will ease. Exports will grow less strongly, due to weaker global growth and a higher NZD," it said.

"While the Canterbury reconstruction will provide a sizeable impetus, particularly to the construction sector, economists are uncertain on the actual timing and speed of reconstruction. Forecast residential construction growth ranges from 24% to 59% in the March 2013 year and the rebuild will start later than thought in June," it said.

Exports not as strong due to higher NZ$

Export growth forecasts had been trimmed, reflecting global economic uncertainty and expectations of sustained strength in the New Zealand dollar. However the outlook was resilient despite the downward revisions, NZIER said.

Economists expected inflation to average 2.7% over the next three years, near the top of the RBNZ’s target band. Global risks mean rate hikes are likely to be from early 2012, NZIER said.

"A widening current account deficit reflects insufficient domestic savings to fund investment in the economy. This can be a source of economic vulnerability when global investment appetite sours," NZIER said.

Meanwhile, the labour market was recovering with economists expecting continued growth in employment and wages.

Finally, the outlook for private consumption was stable, with continued moderate growth.

"Economists expect 2.0% growth in the March 2012 year, unchanged from the previous year. Growth will trend slightly higher to 2.6% by the March 2014 year. This is more moderate than 4.2% average growth in the 5 years preceding the recession," NZIER said.

"Economists expect public consumption growth to trend lower from 2.5% in the March 2012 year to 0.3% in the March 2014 year. This is consistent with more restrained government spending announced in the May 2011 Budget," it said.

"A widening current account deficit reflects insufficient domestic savings to fund investment in the economy. This can be a source of economic vulnerability when global investment appetite sours," NZIER said."

$13,700,000,000? That current account problem is a ticking time bomb and should be front and centre for the coming election. Seems like no one wants to confront the ugly reality that we are well on the way to becoming serfs to our foreign owners and bankers. Disgusting!

BTW, here's a little cracker. Talbots Last Lament, too good to paraphrase, have a read:

Kiwidave, thank for the link

look at the UK

New figures from the Office of National Statistics ten days ago about the degree to which the dependency culture has taken hold shocked even me. One in three households in Glasgow, Nottingham and Liverpool have nobody at all in work. Cardiff’s figures are not far behind…and in Wales as a whole, only 1 in 2 work in the private sector. About 20% of the Welsh population is now dragging the rest behind it in terms of directly productive work.

New Zealanders are being led into a slaughterhouse by the strong dollar, and dont know it.  There will be no pressure on politicians to do anything about the strong dollar simply because its like a virus , you will only feel ill much later. In this case when the remnants of New Zealand's industry has been gutted , and unemployment really strats to bite.

There is always the other side of that coin - a strong dollar is one that can purchase more and therefore reflects a higher standard of living.

Now that is the thinking that puts us into the hole.

Selfish dreamers have got us where we are right now and until the politicians stand up and be counted we will go on. Key is not that poli for sure.

Fortunately having our own currency will prevent us doing a Greece but the end result will be the same. It just takes longer.

A low NZ$ has importers weeping uncontrollably into their cornflakes, while exporters dance a jig of joy.

Moral of the story is that no matter where the NZ$ is, someone is winning and someone is losing.