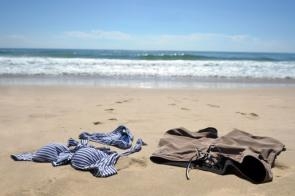 Question marks remain over whether banks will be caught swimming naked if the tide goes out and New Zealand is hit with another major earthquake.

Following insurers' move to sum-insured from full replacement insurance after the February 2011 Christchurch earthquake, banks can’t say exactly how exposed the current level of underinsurance in New Zealand leaves them.

“Following the move to ‘sum-insured’ home insurance we raised concerns about the likelihood of underinsurance. Those concerns remain in the context of recent events [Kaikoura quakes].”

Why banks care about underinsurance

The NZBA, in its 2015 submission on Treasury’s proposed changes to the Earthquake Commission Act, explains:

“Under the terms of most banks’ mortgages, home owners must hold sufficient home insurance to rebuild or replace their home in the event of a total loss. The insurance protects the asset the bank has taken as security, to make sure that if the home owner is unable to repay their loan, the bank can recover the money owing by selling that home.

“Importantly, the insurance also protects the home owner by ensuring they retain the wealth (i.e. the equity) they have in their home.

“If the home owner is underinsured and their home is destroyed or seriously damaged, the bank carries a credit risk as the value of the bank’s security is impaired and the bank may not be able to recover the lending.

“Of greater concern, the home owner could face a situation of nil or negative equity resulting in serious adverse change to their financial circumstances.”

The ICNZ’s chief executive Tim Grafton doesn’t believe underinsurance has been a problem in the wake of the Kaikoura quakes.

“I don’t have any information on that with respect to the earthquakes. What I do know is that we can expect 90% of claims to be under the EQC’s $100,000 cap.

“Whatever it is, [the level of underinsurance] is going to be a very small number of the total number of damaged properties as a result of the earthquake.”

Grafton doesn’t support Treasury’s research, which found that up to 85% of New Zealand homes could be underinsured by an average of 28%.

“I think they put a large number on what that could mean, but it was absolutely meaningless, simply because we don’t get everything total loss.”

In other words, total losses will be a very small percentage of the total number of damaged residential properties.

The Reserve Bank, in its Financial Stability Report released this week, says: “The recent magnitude 7.8 Kaikoura earthquake is not likely to present a risk to financial stability.”

Banks not declining mortgage applications due to insurance freeze

“There may be issues around insurance. In line with previous practice, banks will continue to require insurance for the properties they lend on," she says.

“Some banks may also require structural assessment building reports. That’s to ensure customers are adequately protected and not put in a position where they purchase a damaged home with insufficient insurance to fix it. The bank may cover the cost of that report if it’s needed," Scott-Howman says.

Asked whether banks have (yet) declined any mortgage applications on the basis the applicant hasn't been able to secure their own home insurance and the bank has deemed the vendor's level of insurance too low, she says: “At this stage we’re not aware of any such cases."

Grafton says: “If you were purchasing a house, for which you could not get sufficient insurance to satisfy yourself that you are covered, ought you to be buying that house?

“If you’ve now made a decision that you want to take that huge risk on yourself, then you’ve got to go to the bank and say, ‘I’m taking on this risk and we’d like you to take it on as well’. At that point the bank is going to have to ask itself the same question…

“If you then proceed with a purchase, because the bank’s prepared to fund it, then you should go into that with your eyes wide open.”

Insurers unwilling to spoon-feed banks information about their clients

The NZBA has previously asked insurers if they’re willing to partner with banks to create a database detailing what insurance people have on their properties.

Asked how useful this sort of registrar would be in the current environment, and whether the NZBA will approach the ICNZ on the matter again, Scott-Howman says: “The ICNZ is aware of our view.”

“Insurers are fully focussed on responding to the Kaikoura earthquakes, rather than busying themselves with the needs of the banks,” he says.

Treasury is having a bad week. They do not seem to be believed by many people at all!
Creating the database mentioned at the end of the article seems to be an excellent idea.

They must be rubbish. The Beloved leader says so.

You think Insurers have got problems here? I almost feel sorry for them in the Old Country.....
http://www.telegraph.co.uk/news/2016/12/02/crash-attic-two-mercedes-car…

Grafton says: “If you were purchasing a house, for which you could not get sufficient insurance to satisfy yourself that you are covered, ought you to be buying that house?

“If you’ve now made a decision that you want to take that huge risk on yourself, then you’ve got to go to the bank and say, ‘I’m taking on this risk and we’d like you to take it on as well’. At that point the bank is going to have to ask itself the same question…

“If you then proceed with a purchase, because the bank’s prepared to fund it, then you should go into that with your eyes wide open.”

Exactly. Charles Dickens observed, a potential house buyer seeking insurance to obtain a bank mortgage is best described in both instances as nothing more than,

Uncertainties around bank exposure to natural disasters is more reason to ensure they are holding much more capital than they do currently.

Indeed. If Wheeler was seriously concerned about the banks' 'financial stability', instead of tinkering at the edges and hammering (sorry meant 'protecting') FHBs, he'd grow a pair and apply higher CARs.
Instead, we'll just let the Aussie owned banks run the show here.

Tim Grafton is well aware that in Christchurch 8000 homes were red zoned, a high proportion of which were heavily damaged but under the dollar threshold at which owners were forced to take the crown offer. Insurers were then able to settle these claims at a notional repair cost based on the site being rebuildable. Had the crown offer not been available, a large majority of these properties would likely have become economically unviable to fully restore and would have lost significant value. Add the 8000 in and the ratio of write offs increases sharply. The exposure is bigger than Grafton would have us believe.
Fast forward after 6 years of cumulative underinsurance of ,say, 5% per annum as building costs rise and we get a repeat event in somewhere like the Hutt. Insurers will pay the sum insured which is now about 60% of what is needed to rebuild. The banks will sweat, hoping big Gerry will rush to the rescue and declare another red zone but will he, given the dollars will be so much more than in Christchurch which had open ended policies? He would effectively be subsidising banks loan risk management approach.
If there is no read zone repeat, the banks exposure is significant. And don't even mention Auckland and volcanic eruption.
Banks are doing an ostrich act, they need to be more proactively ensuring their mortgagors are properly insured.

Decades ago banks and insurers cooperated in sharing information, when asked, about the current insurance status of a mortgagor. These days, with sophisticated risk management techniques, the banks know what their potential exposures are and have modelled the cost. Where they feel their balance sheets could not absorb the cost of underinsurance/no insurance of the residential mortgage book in disaster scenarios, they will have purchased contingency cover - either from an insurer or through the use of relevant financial instruments.

In the whole scheme of things, the risk for banks of underinsurance is easily managed. It's the broader system impact of big natural disasters that will be keeping them awake at night.

Yes, they do arrange contingency cover (which mortgagors pay for through increased handling costs) but not convinced the risk is as 'easily managed' as you suggest. The extent of underinsurance becomes increasingly difficult to establish with passing time and broad assumption based estimates that build in significant error margins are needed, at progressively higher cost to insure.
Partly mitigated by churn of properties, at which point insurance is usually reviewed.
A spin off is that while the bank is protected a global level, the consequences of underinsurance still fall directly on individual homeowners with full recourse loans, even if the bank is able to make a claim on its contingency insurance for unrecoverable equity losses. You can bet the average punter won't have access to that at an individual level.
Even if it is cheaper (at the moment when the cost of contingency cover is relatively low) than putting resources into enforcing proper levels of cover, they have a moral obligation to Kiwis to do so.
Agree with your last sentence that wider economic knock on effects of a disaster is their key exposure - Kaikoura an example in miniature of your point

What do the Rating Agencies say ?

Don't banks now require that the sum insured value is greater than the amount of the mortgage for this reason?