RBNZ in the 'strong position' of having both further room to cut the Official Cash Rate and unconventional monetary policy tools if required, Assistant Governor Christian Hawkesby says

RBNZ in the 'strong position' of having both further room to cut the Official Cash Rate and unconventional monetary policy tools if required, Assistant Governor Christian Hawkesby says 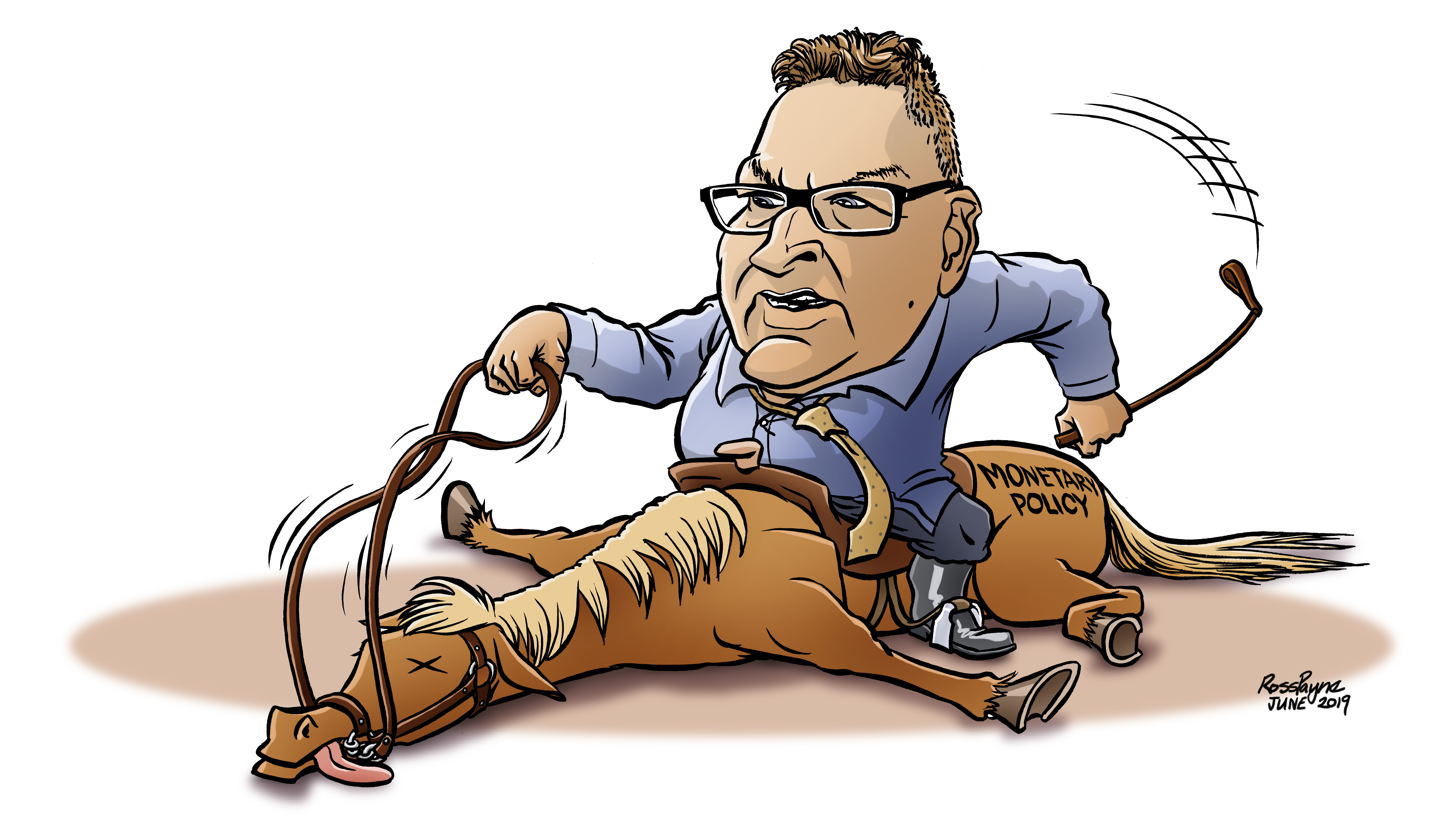 The Reserve Bank is in the "strong position" of having both further room to cut the Official Cash Rate (OCR) and unconventional monetary policy options if required, says the central bank's Assistant Governor and General Manager of Economics, Financial Markets, and Banking.

Christian Hawkesby, who joined the Reserve Bank from Harbour Asset Management in late April, made these comments in a speech in Tokyo. The speech was made on May 30 but released by the Reserve Bank on Wednesday, June 5. Hawkesby is a member of the Monetary Policy Committee.

The Reserve Bank cut the OCR by 25 basis points to a record low of 1.50% in May. At the time Reserve Bank Governor Adrian Orr said he doesn’t believe interest rate cuts will become less effective the lower the OCR is.

In a speech to the Bank of Japan's Institute for Monetary and Economic Studies, Hawkesby said the Reserve Bank's central view is that New Zealand’s interest rates will "remain broadly around current levels for the foreseeable future." However, the Reserve Bank needs to be ready to adapt to changing conditions in order to meet its objectives even when confronted with unforeseen developments, he said.

"An issue that policymakers and academics are grappling with around the world is the role of both monetary and fiscal stimulus in a world of low interest rates," Hawkesby said.

"There is emerging consensus that coordination is necessary for an optimal response of broader macroeconomic policy. For central banks, operational independence does not have to mean operational isolation. Rather, collaboration with government can be done in a way that builds and reinforces the social licence to operate, by showing a willingness to work with other partners to do whatever is necessary to achieve the broader objective - improving public wellbeing."

But even with coordination between monetary and fiscal policy, if further macroeconomic stimulus is needed quickly the first line of defence will still be central banks, Hawkesby added.

"In New Zealand, we are in the strong position of having further room to provide conventional monetary stimulus if required, using the OCR."

"Having effective unconventional policy options expands the toolbox of a central bank, which is naturally more relevant in a low interest rate environment. In this spirit, we published a Bulletin article last year on the practicalities of unconventional monetary tools in a New Zealand context, and we continue to learn from the lessons of our central banking cousins," Hawkesby said.

"It’s better to have a tool and not need it, than need one and not have it."

The Bulletin article Hawkesby referred to details five options available to the Reserve Bank should future economic conditions require the OCR to be reduced to zero. They are moving the OCR into negative territory, buying domestic and foreign government bonds, purchasing interest rate swaps, and providing long-term lending facilities for banks.

My pick is that by November, the NZ economy will be in a pickle due to domestic and international pressures.
The RB should withhold cutting any further, and keep its 1.5 BPs in reserve for desperate times.
My pick is also that the government will need to provide fiscal stimulus in next year's budget.

Since it's election year they were probably planning that anyway.

As Fritz comments above, fiscal stimulus is likely to be required and may be a lot more effective than a rate cut if (for example) income tax cuts puts hard dollars in people's pockets.

How could a fiscal stimulus NOT happen next year?!!

Have you forgotten 2020 is election year and that there's a Labour coalition in office - desperate for a second term.........

TTP, with all the new spending in the budget we already have some fiscal stimulus. I can't see much of a give away next year or even the new recently relaxed debt ceiling will quickly be tested. To be honest I don't see there is much the govt can/will do to slow the inevitable slowdown caused by the reduction in Auckland real estate prices and the resultant trickle through to trades, employment and retail spending. Seems more likely JA will get a second term because of the fiasco that is National rather than domestic policy success.

I don't agree, JA has had her term. The country has seen right thru this Coalition.

And how would you know that? I increasingly dislike ideologues who are wedded to one political view or the other. The idea that any one party has a monopoly on good policies while the other lot are just useless,has never been true.
I want to give the coalition another term to see what they can achieve,but will vote to remove them if they fail. The last government deserved to thrown out for their many failures and I can't stand the thought of Bridges as PM,but if they can learn,then I'll give them another go.

He was in Japan preaching about his tool box. Lets see if Japan is converted, or do they already have the toolbox. ? Given that the algos immediately took the kiwi higher when the dated remarks were released , how will inflation ever return to its mythical target unless you move first. If you need a weaker dollar, crush it , instead of pontificating about the flaccid tools at your disposal.

The Reserve Bank cut the OCR by 25 basis points to a record low of 1.50% in May. At the time Reserve Bank Governor Adrian Orr said he doesn’t believe interest rate cuts will become less effective the lower the OCR is.

What did cutting OCR rates in half from 3.5% to 1.75% not achieve that will be rectified by going to the zero lower bound, other than reducing bank deposit rates below a rate of return consistent with RBNZ declared rising bank asset credit risk?

Exactly right. Reserve banks around the world are being a bunch of idiots, trying to out monetary policy each other in a grand race to the bottom. They need to be reigned in so we can return to normal, even though that may mean an engineered slow collapse of asset prices.

Instead though they are obsessed with putting more and more credit in the system because it is the only way they can keep growth at the level they want. Hang on, isn't growth supposed to be a result of government financial/tax/social/etc policy? Nope, it's taken out of the governments hands now and given to central banks so they can just keep pushing the bubble further and further. The more you read about it, the more you realise the major requirement for growth now is more credit (just look at Australia when they turned the credit taps off).

Meanwhile the social outcomes should scare the s**t out of everyone. Nobody having children (birth rate in NZ is dropping off a cliff, down 5% a year), young people being unable to afford houses, sky rocketing rates of homelessness/housing stress, huge immigration just to keep the economic wheels on driving massive infrastructure pressures... how long before we have enough people with enough problems that there is rioting in the streets?

You only need a toolkit if the machinery is faulty or hasn’t been assembled properly in the first place. Otherwise there should be a lifetime guarantee.

You used to be able to buy a toaster or kettle and know it would work for 10-15 years... these days you need to buy insurance or be prepared to buy a new toaster or kettle again within 2 years. Inflation is low, but replacement costs are very high. F & P stuff for example doesn’t have the longevity of use it once had. CPI is an arse measure when you have to replace crap that breaks at at a rate of 5 times earlier than it used to...

I-phones seem to have a manufacturers (die) button where they go ballistic and the only solution is a new one.

A world of replacement product to boost spending and keep the CPI low on stuff that used to be a ten year part of the basket not every other year.

As for tools? Interesting question, do we need more tools? Or less of them?

I bought my toaster from The Warehouse about 10 years ago. Wasn't the cheapest one they had, in fact has features that more expensive toasters often don't. Still going fine.

A negative quality bias in the CPI is very hard to argue. Products that reduce in quality and increase in real price don't tend to feature in many markets.

Substitution and new goods biases are now relatively benign in the CPI measures given the range of competing products and the use of price matching techniques/hedonics.

It may be surprising, or not, but there is a not insignificant amount of economists and statisticians who dedicate their whole lives to measurement. Modern measures are not as susceptible to the high school level economics class objections to CPI as an unbiased price measurement tool.

"Toolbox" plants the image of fine-tuning. But as Joe Wilkes points out, you can't fine tune something that is already broken. This isn't going to end well.

Agreed. The thought of NZ QE is genuinely frightening. Let's hope that it is all talk as concept of zero rates has failed the younger generation the world over.

QE is an asset swap. Reserves for bonds. Its use in the post GFC era shows that it it pretty useless. It might lower investment rates a bit but that doesn't spur investment if customers aren't coming through the door and existing capacity serves the few that remain just fine. What really stabilises an economy is spending. Fiscal deficits put money in people's pockets - hopefully the people most likely to spend - i.e. low and middle income people. Deficits are a net injection of money to the private sector. Not a mere asset swap. Pushing on a string is what Keynes called the interest rate transmission mechanism. Central bankers are string pushers.

Problem is the article the other day breaking down how we measure inflation suggested the mix of measurements may be wrong. As a result, inflation is hitting in areas that then serve to reduce discretionary spending capacity, whereas the reserve bank keeps pushing the OCR rate lower to try to boost the more stubborn aggregate measure.

Living costs going up, discretionary spending going down. Cutting the rate further isn't going to prompt spending if living costs are rising to take up that slack.