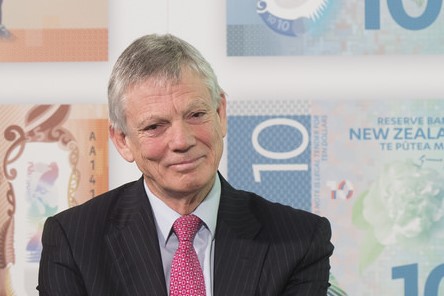 It is widely expected in the market that Wheeler, who took the job in 2012, will announce he's not seeking a second term as Governor.

Joyce told Interest.co.nz in Wellington that he had already had one discussion with Wheeler about a range of matters and also a discussion with RBNZ Board Chairman Neil Quigley.

Earlier Prime Minister Bill English had confirmed that he had discussed Wheeler's future with him while still Finance Minister late last year.

Joyce said it was "a bit early" to say whether the RBNZ had a shortlist for a replacement for Wheeler. "Let Graeme make the statement and we'll go from there."

Joyce said he "hasn't got a view" on whether he would prefer another New Zealander as the next Governor. "We'll step through this one step at a time."

Assuming Wheeler, whose salary is about $660,000, does announce he's not seeking another term, the options for a new Governor include either seeking someone already working within the RBNZ or looking outside New Zealand and internationally. As required under the Reserve Bank Act 1989, the Reserve Bank board of directors recommend an appointment to the Minister of Finance after an extensive recruitment process.

Wheeler, although a New Zealander, did come to the bank from outside in 2012, returning from the United States where he had been for many years. From 1997 to 2010,  Wheeler was employed by the World Bank. His most recent roles there included managing director operations (2006-2010), and vice-president and treasurer (2001-2006). Previously, he was at the New Zealand Treasury as deputy secretary and treasurer of the Debt Management Office.

There doesn't appear to be any obvious successor to Wheeler within the current RBNZ ranks, with current Deputy Governor Grant Spencer possibly having his best chance of getting the top job when the job last came up in 2012.

One person seen as a likely candidate - if available - is the chief executive of the NZ Super Fund Adrian Orr. He was Deputy Governor of the RBNZ till joining the NZ Super Fund in February 2007. Orr has has also held the positions of Chief Economist at Westpac Banking Corporation, Chief Manager of the Economics Department of the Reserve Bank of New Zealand and Chief Economist at The National Bank of New Zealand. He has also worked at the NZ Treasury and the OECD based in Paris.

Another former RBNZ Deputy Governor and indeed Acting Governor, Rod Carr, who was chairman of the RBNZ board till last year, is seen as another possibility. Carr is vice-chancellor at the University of Canterbury.

Wheeler's time in charge of the RBNZ has not been without controversy.

In terms of the conduct of monetary policy, the RBNZ has under Wheeler spent long periods missing its inflation targets as set out in the Policy Targets Agreement between the RBNZ Governor and the Minister of Finance. This specifies that inflation be maintained within 1% to 3%, with an explicit target (this one added in Wheeler's term) of 2%.

Only last week, with inflation coming in at an annual rate of 1.3% as of December, did the RBNZ see the inflation rate head back into the targeted range for the first time in over two years.

In the first half of 2014 the RBNZ jumped the gun in seeking to 'normalise' interest rates that were at very low, stimulatory, levels following the Global Financial Crisis of 2008. The RBNZ's official monetary tool, the Official Cash Rate was raised four times during the first half of 2014, taking the OCR from 2.5% to 3.5%.

Subsequently the bank had to more than backtrack on this, though Wheeler has been very reluctant to publicly concede that the series of 2014 hikes was a mistake.

And while Wheeler's public speeches became less frequent during his tenure, some of these prompted some controversy and confusion.

In speeches delivered in October 2015 and February last year Wheeler effectively talked tough and portrayed himself as a reluctant cutter of rates. Such comments led to the market reacting the opposite to how the RBNZ wanted - with swap interest rates spiking and the high New Zealand dollar, a constant bugbear for the RBNZ, actually being driven higher.

In that February speech, last year Wheeler said the RBNZ would not 'mechanistically' cut rates to increase the rate of inflation. Interest rate swaps rose slightly. The kiwi dollar rose rather more strongly - something the RBNZ expressly did NOT want.

While the monetary policy operations of the RBNZ are still probably the most publicly visible. the financial stability responsibilities of the central bank have gained in importance, particularly since the GFC.

Wheeler presided over the introduction of the RBNZ's 'macro-prudential toolkit'  in 2013. The toolkit is to assist in promoting financial stability. One of these 'tools', loan-to-value ratio controls, has been extensively used against the overheating housing market - again not without controversy - since late 2013.

The latest iteration of these LVR controls was the introduction of a 40% deposit rule for housing investors from October last year. This has appeared to have, so far, worked in taking some heat out of the market.

More recently Wheeler and the RBNZ have been championing the addition of debt-to-income ratios into the macro-prudential toolkit, but this requires sign-off by the Government.

Despite a promise by Wheeler that these would not be used right now, the Government has shown a reluctance to introduce them and the initiative currently appears to be stalled.

What a lousy employer/individual Stephen Joyce is. I would have thought that this is an employment issue and like any good employer he should keep his mouth shut until matters are sorted out with Graeme Wheeler.

Does the Term" Night of the long knives" ring a bell. Joyce should be careful when the bell tolls for him later in the year.

Does the Term" Night of the long knives" ring a bell. Joyce should be careful when the bell tolls for him later in the year.