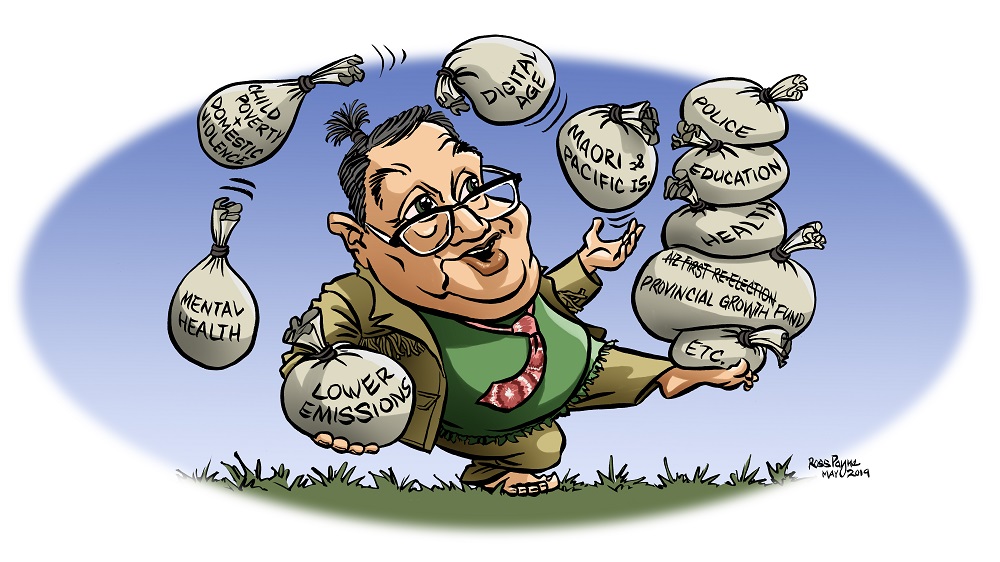 Budget 2019 is likely to set the stage for potential incremental change, as spending decisions are more formally measured against a broader range of indicators (beyond economic growth) laid out in Treasury’s Living Standards.

However, with economic growth slowing more than expected, Robertson will have less room to splash the cash before hitting his self-imposed debt ceiling than he did last year.

Westpac economist Anne Boniface explained: “The fiscal accounts are likely to show the Government is running out of wiggle room.

“The weaker than expected starting point for the economy will be weighing on the Treasury’s revenue projections, and the recent run of surprisingly strong tax revenues has come to an end.

“We expect little additional spending… although we could see some reprioritisation of spending. Despite this, the Government is still likely to need to borrow a bit more.”

ANZ economist Miles Workman provided more detail on this additional spending: “As at the Half-Year Update, operating allowances for Budget 2019 to Budget 2022 were confirmed at $2.4 billion per Budget, with some pre-commitments leaving a little less than that in the kitty for 2019 and 2020.

“We expect operating allowances to remain unchanged, but if anything, the risk is skewed towards these being lowered slightly to keep the debt projection on course towards 20% of GDP.

“No change to allowances implies all new spending decisions will either be made against what’s yet to be allocated, or from reprioritised spending. Minister Robertson has said the Government has found cost savings of $1 billion over the forecast period.”

“Regardless, the Government is likely to want to keep its powder for Budget 2020 and/or election year spending promises,” he said.

“In the same vein for this Budget, the Government is likely to favour highlighting the approach and priorities included in the Wellbeing Budget rather than big-bang policy announcements per se.”

Penny went on to say: “We expect Budget 2019 to show that the Government is forecast to run modest operating surpluses (OBEGAL).

“That said, the Budget forecast OBEGAL is likely to be softer from 2021 onwards compared to the Half-Year Update as the economic outlook has softened significantly since then.

“Indeed, by the end of the forecast period, we expect the OBEGAL to be around 1.5% of GDP lower than as at the Half-Year Update.”

A case for borrowing more to invest in infrastructure

Taking a strong position on Robertson’s net core Crown debt target, which will be broadened from 20% of GDP to 15% to 25% of GDP from 2022, Kiwibank economists Jarrod Kerr and Jeremy Couchman said: “At this stage we expect just a small increase in net-debt issuance by the Debt Management Office.

“We expect (hope) next year’s budget to use some of the (huge) war chest available for infrastructure.

“Why 20%? It sounds good, that’s all. There is no actual basis for the number.

“There are only 11 AAA nations on the planet, most of them small on the economic map. The US is not AAA, nor is China, the UK, France, or Japan. But hey, we’re mixing it with Luxembourg, with a rating we don’t need.

“Both rating agencies have stated we have able room to lift debt for investment purposes.

“Most people fear debt. But when interest rates are below both real and nominal growth rates, debt is not an issue… we build a better economy for tomorrow and our growth improves.”

A case for prudence

“New Zealand fiscal position is strong right now, and even if net debt hits 25% of GDP at some point, it's still low by international standards. But in the future the ballooning cost of national superannuation and health care will severely strain the Government’s finances,” she said.

“It would not be particularly prudent to increase debt faster than GDP growth just before the demographic time bomb goes off.

“Some might argue that the Government should take advantage of opportunities to invest, but building the economy depends far more on the quality of spending than the quantity.”

“The Budget is likely to show a capital underspend of about $1 billion this fiscal year.

“While allocated spending is still likely to happen, it will now occur later than previously envisioned, temporarily improving the Government’s net debt to GDP position.”

Commenting on the wellbeing approach, Kerr and Couchman explained the idea was to take a longer-term intergenerational view when making policy decisions.

They called it an “admirable approach, but unlikely to deliver short-term gratification”.

“The bold approach is perhaps asking too much of New Zealand’s political system renowned for short-termism in its three year election cycle.

“But measures directed at increasing the wellbeing of all New Zealanders are worthy of pursuing. Measures of “success” will vary, but the measurements themselves will help us get a better understanding of our weaknesses.”

Penny was likewise supportive and noted the change of approach would time to bed in.

“Success will also depend heavily on ensuring there is appropriate feedback from measured outcomes back into policy refinement, something New Zealand’s short electoral cycle may hamper.”

All very Interesting, but let's see what Treasury Assumptions are for the actual Budget.....last years' were too optimistic...