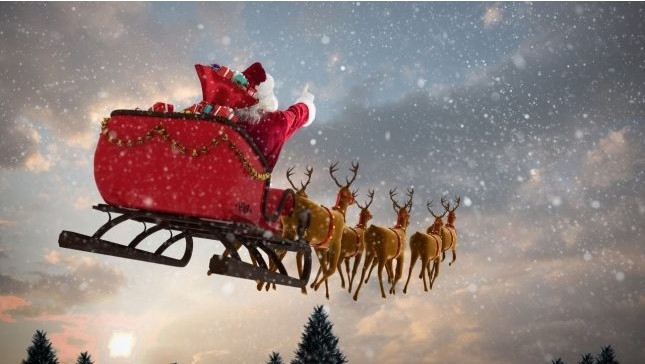 A global pandemic has introduced us to lockdowns, working from home, social distancing, managed isolation and face masks. We've seen one party win a majority under our MMP voting system for the first time, the Reserve Bank embark on quantitative easing, and even with the country closed to immigration, we again have a red hot housing market.

Despite the challenges we've faced in Aotearoa during 2020, it has been one of the better places to spend 2020.

Now, with the Prime Minister having granted Santa Claus a border exemption so he can visit New Zealand to deliver Christmas presents, it must be time for our annual Interesties Awards. Looking back through previous years tells me this is the tenth version of our light-hearted annual awards. How time flies...

With thanks to Jenée Tibshraeny for assistance with the awards, here are the 2020 Interesties where we find out what Santa has in his sack for the people who made our news this year.  As ever, we welcome your comments, and suggested additional awards, in the comment thread below. (All previous versions of our annual Interesties can be found here).

It has been a big year in politics thus this year's awards are heavily weighted towards politicians. I've endeavoured to limit people to one award each. However, in the case of a certain president that just wasn't possible.

Just before we get into the awards, let's start with a joke at the expense of the great vampire squid of the global financial markets...

BREAKING: Goldman Sachs puts out note confirming they will continue their existing “social distancing” best practices between clients and their money that they have had in place for years.

The Worst Impression of a Coherent Political Party Award - The National Party.

The Cyclist and Beach Goer of the Year Award - David Clark.

The Hyperbole Award - Judith Collins for her claim in a July 29 press release that “by Christmas, as many as 500,000 Kiwis may be unemployed."

The Best Impersonation of John Key in Ruling Things Out While PM and Playing Down an Overheating Property Market Award - Jacinda Ardern.

The NZ Politician Seemingly Most Keen to Import US Culture Wars to NZ - David Seymour.

The Pulled the Handbrake and Then Got Left Behind Award - Winston Peters.

The Conspired in His Own Political Demise Award - Jami-Lee Ross for teaming up with Billy Te Kahika in Advance NZ.

The Who's That Award - The new ACT and Labour MPs whose names we're still learning.

The Fire Starter Award - Reserve Bank Governor Adrian Orr for the assistance of super low interest rates and quantitative easing in firing up the housing market.

The Most Shameless Property Spruiker of the Year Award - Several contenders but Ashley Church takes the gong. Here's one of his efforts here.

The Please Save Us From Ourselves Award - The country's major banks in regards to their high loan-to-value ratio housing lending.

The Corporate IT Egg on Face Award - Share market operator NZX for its daylight savings blunder.

The We Got Everything Wrong About COVID Again and Again Award - The shock jocks and media pundits out there who did exactly this. They know who they are.

The What Goes Down Must Go Up Award (with apologies to Isaac Newton) - The economy.

The Whoopsie Daisy Award - The public servant who accidentally clicked on the wrong file that ended up in Parliament passing the wrong bill enabling billions of public money to be lent to businesses.

The Muse of the Year Award - Donald Trump. Just what will the world of satire do when/if Donald Trump leaves the White House? He has been a source of endless material for the past four years, as demonstrated by Sarah Cooper below...

How to Compilation Volume 1 https://t.co/mIW1IYGQEp

...Translate Trump. And this was before Trump caught the actual virus...

Is there anything more poetic than Donald Trump being taken down by a Chinese virus named after a Mexican beer?

The Worst Speech of the Year Award - Donald Trump's Oval Office address in March. Supposed to calm a nervous nation, instead it caused chaos with the President erroneously saying the US was banning trade and cargo from Europe. Nouriel Roubini, Dr Doom, was not impressed.

Stock market gives his instant verdict on the empty speech by clown Joker Trump: futures for Thursday open crash down another 5% after equities have fallen already into a bear market (-20%)after a 5% free fall on Wednesday pic.twitter.com/Cu5MfNBjDp

And nor was Financial Times associate editor Edward Luce...

The Most Entertaining Article About the Four Seasons Total Landscaping Press Conference Award - Richard Hill, The Independent. Here's the intro.

It began, as all good 2020 capers do, with a tweet from the president of the United States. It ended with his personal lawyer in the parking lot of a landscaping company, struggling to be heard over a man in his underpants shouting about George Soros.

Comeback of the Year Award - Borat. Perfectly timed for 2020.

The Highest Profile New Zealander Most of Us Hadn't Heard of Before 2020 Award - Ashley Bloomfield.

Most Over Used Cliche of the Year Award - The team of five million.

The New COVID Community Case Supermarket of Choice Award - Countdown. There always seemed to be a Countdown undergoing a deep clean whenever a new COVID community case or quarantine escapee emerged.

The Soviet Era/Muldoon Era Law of the Year - All the intricate COVID-19 gathering restriction rules introduced around the world.

Did you hoard too much toilet paper at the onset of COVID-19 earlier in the year? If so, then check out the festive season game below for an idea on how to use that mountain of toilet paper.

I can't confirm whether the picture below is set to feature in a new Tui beer billboard advertising campaign.

In a year of crazy charts, think COVID-19 case numbers, the bitcoin price, US unemployment and NZ house prices to name a few, I've gone for this ridiculously flat one below for Chart of the Year.

Finally, thanks to all those who've made informative, entertaining and humorous contributions to interest.co.nz this year adding to the discussion and debate. We really appreciate it.

There's been no shortage of content to report on this year.

The year me is ending strong with a lot of construction. Large portions of that work are providing homes for people to live in, and most of it seems to be going directly to social housing. There should be some positives that come out of next year even though it's likely to be tough.

One thing that I'm interested to see the outcome of is how all the kiwis returning home will change the country.

Pat yourselves on the back kiwis, great job team of 5 million.

Except for people for the guy who made a video of himself coughing in supermarkets and all the Aucklanders who went to the holiday batch when the government where trying to contain an outbreak in Auckland.

Kiwi delusion: An acquaintance in Unn Zul'nn messaged me to ask if I was "basking in it". He was referring to the America's Cup. Because I'm an Unn Zudd-born person in Los Angeles, and therefore I should be the toast of the town because some Kuhwuh yachties beat some Brit yachties in a sailboat race almost no American has ever even heard of, and even fewer care about.

A bunch of rich boys (not that I watch but I've never heard of women on those boats) playing in their rich boys' toys. People like to delude themselves that it's a national sport.

The America's cup competition is probably more financially useful to NZ than all the Aussie banks and the Coles Myer Aussie owned Countdown. K-Mart and Bunnings put together.

To be fair, on Grant Robertson passing the buck, the Prime Minister also indicated that the public where to blame for not 'supporting' policies that where never actually introduced.

You missed out interest.co.nz's Premier Award; the one that encapulates all the others into just one. The:

Best to all , writers and commentators alike, for the coming year.

"State owned airline is best for everyone!"

They won't be flying into the Sunset anytime soon, mate.

Rhino Hide Award : Trevor Mallard .... you gotta be so thick skinned to destroy an innocent guy's life , rack up mega legal bills for the taxpayer to fully fund , and to carry on regardless ...

Feed Me , Feed Me More award : Greta Thurnberg .... no matter what Jacinda Ardern promises on climate change legislation , it's still not enough , never going to be enough ....

Feed me, feed me more to Greta? Please. There are so many more thirsty people out there. Trump for one has tweeted and media whored like a rabid dog all year. Truly and relentlessly needing more at every moment. What about all the conspiratards constantly twisting and distorting evidence from all their idiotic alt-news sources to try and deny the virus and then rant in these very comments? Clinging to their herd immunity Sweden wet dreams? There was no amount of actual information that could satiate that hunger, no gravity of data that would ever slake that thirst.

Don't forget Tricky Trev got the law changed so the taxpayer foots his legal bill instead of himself.

If that banking graph is not evidence of complete and virtually open and (Govt)accepted collusion I don't know what is. How we ever let these four foreign monsters get so big and pose such destructive risk to our entire economy is beyond me.
I guess when they directly signal to the powers that be that there are cushy, money for nothing type future positions available for those who maintain the status quo it is difficult to invisage any meaningful change.

''We went hard,and we went early""
Obviously didn't apply to the building of affordable houses or ending child poverty.

IMF Special Prize for Most Misunderstood, Least Reported on by MSM, and Best Performing Asset of 2020 --

With all respect, Bitcoin doesn't even come close to being the best performing asset of 2020. Tesla has outperformed it by a country mile, and plenty of other companies have outperformed Tesla (Nio, Digital Turbine etc etc).

Most used cliche (word) of the year - Absolutely. If I hear The PM use this word once more I will scream (absolutely).

Haha for interest.co.nz there is only one!

Told ya so award: David Hargreaves re. the impact of LVRs getting dropped.