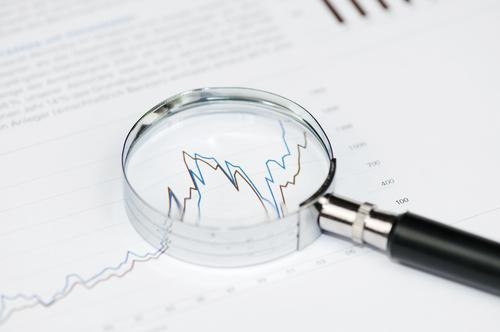 Some things arguably don't receive the attention they deserve at the time, possibly due to the way they are presented.

A week ago the Reserve Bank issued a media release with the not entirely riveting headline: "RBNZ MPS, OCR, FSR dates for 2016-2017".

I did what I believed I was supposed to do with it - entered the dates into my calendar and moved on. But later I had a closer look and was somewhat perturbed and decided that in fact this might be something worth remarking on.

Subsequent to that I had fuel added to my smouldering fire by the NZ Institute of Economic Research.

NZIER principal economist Kirdan Lees has this week put out an interesting dissertation on what the RBNZ has done. He's not impressed and neither am I - and I think more people should be talking about this.

In essence the RBNZ has reduced the number of reviews of interest rates it conducts in the year to seven from eight, though it has retained the four Monetary Policy Statements it currently issues. The timing (as in both the month and the time of the month) of the MPS statement and the non-MPS reviews has been tweaked.

The RBNZ says its new schedule "ensures that the Bank will capture the latest key economic data available for its policy decisions”.

“It also gives the financial markets clarity over a longer timeframe to enable more efficient risk management and pricing of financial instruments.”

Kirdan Lees sees it a bit differently. He says from next year, the RBNZ will "let go one chance each year" to meet and set interest rates. "That means the Reserve Bank could easily fall behind the run rate on the interest rate settings required to manage the economy.

"The Reserve Bank is also tweaking when they meet to try and match the timing of key data releases. That’s too much fine tuning in today’s data-rich environment where the data flow is much more even than in past decades.

"There are ways to improve how interest rates are set. Meeting less often is not one of them."

Well, I agree completely with Lees on this point.

As the table produced with Lees's paper shows, the RBNZ is now going to be making interest rate decisions less frequently than most major economies. 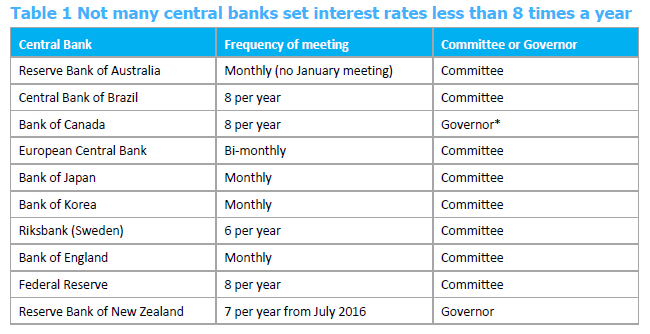 But the real killer for me is the fact that there will now be a glaring three month gap between the last Official Cash Rate decision made in one year and the first in the next.

In a world where the pace of financial change has arguably never been more rapid, this seems like a very long time.

Now, of course, the RBNZ is not tied to the regular schedule rate reviews. It can change the OCR whenever it wants without waiting for a scheduled review - as indeed it did with an unscheduled half a percentage point drop to the OCR after the September 11, 2001 bombings.

But surely, you would want to think that the RBNZ would only ever do unscheduled rate changes in such extraordinary circumstances. Imagine the mayhem in the financial markets If it suddenly started lobbing in unscheduled rate moves as the mood took it. No thanks.

That three month summer break looks too long to me. For a start I don't think the old rule about New Zealand going to sleep in December and waking up some time toward the end of February applies any more. And of course what happens here has arguably never been more influenced than now by what happens in the rest of the world. And the rest of the world ain't asleep between December and February.

If we could be comfortable that New Zealand has had the correct interest rate settings in the recent past then I would maybe concede that the central bank could look at more infrequent reviews.

But that's another point.

Between March and July last year the RBNZ hiked the OCR from 2.5% to 3.5%. It appeared justified at the time, with the central bank reacting to expectations that inflation was going to emerge.

I would contend, however, that from at least October onward it was reasonably obvious that the hikes had been a mistake and that New Zealand had set its rates too high.

What if any damage this has done to the economy is a point for debate. But in the meantime the RBNZ has very gradually been setting about - through its scheduled rate reviews - righting the wrongs of last year and getting rates back to where they should be.

It's widely expected that the OCR will be dropped by a further quarter of a percentage point next week to 2.75%. Then in all likelihood there will be another move before the end of the year, getting rates back down to at least 2.5%. Whether it goes lower than that is another good point for debate. I suspect global goings on will dictate that the OCR does go down further, to a new historic low, though probably not till the New Year.

Wherever interest rates end up though, in the cold light of day, it appears that this country has had official rates set too high for certainly something like a year.

It's an honest mistake by the RBNZ, but a mistake - one that's taken a long time to rectify through the current schedule of OCR reviews. And now the RBNZ says its comfortable with the idea of reviewing rates less regularly, including a three-month hiatus in summer?

I think we need more reviews.

Why not follow the Australian model? Rates there are reviewed every month - although there is a two month break for summer, which I wouldn't suggest we replicate.

I sincerely hope the RBNZ has another look at this issue and changes its mind.

Otherwise we run the risk as a country of always playing catch up with our interest rates. And really, surely, that's not a good look.

Wherever interest rates end up though, in the cold light of day, it appears that this country has had official rates set too high for certainly something like a year.

So, it doesn't really matter how often the RBNZ convenes to advance/reinforce a mistake?

I certainly await with interest, possibly alarm, to observe if the RBNZ can avoid the mistakes Riksbank has self generated.

Early in July, Sweden’s Riksbank proved its dedication to the post-crisis central bank mantra of “if it’s broken, break it some more” when, after becoming the first country to witness observable, indisputable evidence of QE’s failure, the central bank pushed rates further into negative territory and expanded QE. Read more.