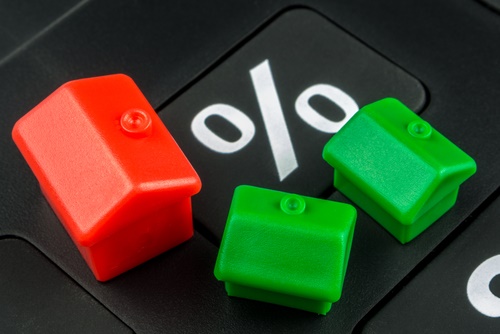 Hold your horses everybody.

Some people appear to be talking as if today's soft inflation figures will have been a total surprise to the Reserve Bank and that interest rate cuts will now follow in short order.

Well, it's true that the RBNZ's decision making seems to be getting harder and harder to predict, but I would suggest not a whole lot has changed for our central bank.

The RBNZ was, after all, predicting deflation (-0.2%) in the December quarter. Now, admittedly, that is some way off the -0.5% we actually got, but falling petrol prices (a 'tradable inflation' item) contributed hugely - and the RBNZ will in large part ignore that. What the RBNZ will see is the rise in housing-related costs ('non-tradable') and it will worry about that, particularly as the latest Real Estate Institute figures show there's plenty of life that ol' housing market yet.

The crunch point for the RBNZ remains, as it has been for some months, the inflation outcome for the March quarter (IE the one we are in now). For this quarter the RBNZ's picking a muscular 0.6% upward shunt to prices. This is the quarter in which it is picking that price pressures from the decline in value in the New Zealand dollar will kick in big time.

The RBNZ made a complete pig's ear of its December Monetary Policy Statement, in which it cut the Official Cash Rate to 2.5% from 2.75% - but accompanied that with a very surprisingly hawkish statement (very loosely translated it read: "We ain't cuttin' no more hombre, no way anyhow - comprendez?") The hawkishness of the sentiment saw the Kiwi dollar surge in late December.

However, the global turmoil that has greeted January has been a very fortunate development for our central bank. If there's one thing that will push our currency down regardless it is global uncertainty. And down the Kiwi dollar has gone, which will be a huge source of relief for the RBNZ - particularly after its complete mismanagement of the currency prior to Christmas.

A lot of retailers will be running out of favourable forward currency rates about now, so, this is the time in which they'll be looking for replaced forward rates and starting to seriously face up to increased importing costs.

For me the accuracy or otherwise of the RBNZ's March quarter inflation prediction was always going to come down to the extent which retailers could pass on higher costs they face. I was interested to read The Warehouse's recent trading update in which chairman Ted van Arkel talked up the company's half-year profit prospects but was more cautious on the full year outlook among other things because of "potential risks around the impact of foreign exchange movement on margin". In other words The Warehouse doesn't think it will simply be able to slap customers for the extra costs it's paying for goods.

No higher prices, thanks

The world has changed. Customers don't believe they have to pay higher prices any more and with the explosion of technology and the way you can buy virtually anything from anywhere now, most times the customers are right.

So, it always seemed simplistic in the extreme to me for the RBNZ to be forecasting that, come January, retailers and other service providers will simply pass straight on to customers increased costs due to a lower dollar. Good luck with that.

Back to the central thesis then. I doubt if today's inflation figures will have changed the RBNZ's mind about rate cuts. ("We ain't doin' no more of them suckers hombre"). But the central bank might have to think about tailoring its language in two key public communications it has coming up.

First up is the OCR decision on Thursday, January 28. It is a lock-down decision that there will be no change. But what does the bank say? January's OCR call is not accompanied by a Monetary Policy Statement - it's just the single page press release from Governor Graeme Wheeler. I never envy the RBNZ's job in trying to send the right signal to the market in what amounts to nothing more than a few paragraphs.

Given how overblown in hawkishness the December statement from the bank was, I think it highly likely that the January statement will give greater emphasis to the downside risks to the RBNZ's outlook stemming from the global situation and the possibility that lower rates might be needed. Then the Governor follows up with his annual scene-setting speech in early February and this will be an opportunity to more fully flesh out where the RBNZ is sitting on issues at the moment.

I think it is all going to hang on whether strong pricing pressures do emerge in this quarter. But come the March quarter inflation figures (to be publicly released on April 18) I think the RBNZ's going to be real disappointed - particularly as I think apart from our own benign inflation situation, I reckon oil prices will likely remain weak. There's only so much downward 'tradable' inflationary pressure the RBNZ can ignore.

The first OCR decision following release of those inflation figures will be on April 28, so, theoretically we could see a rate cut then. However, mitigating against that is the fact that April's OCR call is again another of those single page, hard-to-do, communication numbers. It's still more likely then that the RBNZ would try to wait till the June OCR call, which is accompanied by the full Monetary Policy Statement, bells, whistles, trumpets and a steel band.

So, I reckon by August (time of the next OCR) our official interest rates will be sitting at a new low of 2%.

But the RBNZ's going to have to be led kicking and screaming into doing that, particularly with the ongoing strength in the housing market - and the fact that this is now starting to manifest in some secondary inflationary pressures.

It's still too early to tell whether the RBNZ's new Auckland investor-focused restrictions put in place in November are really dampening the Auckland market, although the drop in sales in December (remembering though that December 2014 was strong) might be a precursor to some easing in prices.

Elsewhere the horse is happily bolting. Now, it is surely a question of time - and not very much time - before the RBNZ reverses its decision to raise the non-Auckland LVR speed limit from 10% to 15% and clamps it back down to 10% again. And very likely that will be followed in short order by similar investment restrictions elsewhere to those currently in place in Auckland. And then it's just a question of how far off we are from seeing debt to income ratios introduced.

Yep, it's looking like being a pretty interesting year.

So, I reckon by August (time of the next OCR) our official interest rates will be sitting at a new low of 2%

Another big call on top of the last one.

They may be forced to cut due to global conditions - despite their reluctance.

David, well done for seeing a bit more clearly than the RBNZ, it is the 17th consecutive quarter where annual inflation has been below the 2% midpoint targeted by the current Governor Graeme Wheeler. How can the RBNZ continuously overestimate the CPI ??? And not learn from it. Of course there won't be 0.6% inflation in March, and why is the RBNZ missing its mandate to keep inflation between1-3%

After 17 quarters and with the tradeables at -2.1% I would be asking WTF is going on? from Wheeler. Meanwhile un-employment gets worse. I mean was does it take to get him to see? actual deflation overall and a NZ depression? He should go IMHO.

David congratulation your the only journalist that can see The Truth :)

David, you are the only journalist that can convey The Truth.

I think RBNZ will be cutting way before August could be as late as march and as early as Jan 2016.

Money printing, huge credit/ debit creation along with low oil prices is going to cause some wealthy nation, corporations, people to sell down assets fast thus, forcing a world wide crash. I expect a huge economic world wide shock, by end of march or some time in 2016 but it will happen sooner rather then later.

This is the year of the big one the big crash bigger than 1929.

As if cutting interest rates were going to make any difference in today's economy other than fuelling speculative bubbles and preventing inefficiencies from disappearing..

But go ahead, lets do what the rest of the world is doing unsuccessfully and lets keep believing in monetary policies.

But there is no "money". So how do we make a policy? So totally agree muntijaqi.

The debit credit is pumping up asset prices which will crash 2016.

Oil prices are adding to deflation but rich nations like the House of, CARDS, SAUDI are going to be forced to sell assets of which they have many including citi bank.

These assets will come on the marklet at the same time and that will force a massive decrease in asset values.

Some people don't understand why rates are being cut.

If one can understand the why it might make you better off.

So with all this pending financial decline, one should perhaps start thinking about changing their financial direction? ie/. Dropping kiwisaver & managed funds from "growth" down to "conservative" to mimimise any potential loses?

Or does it not matter coz the whole will be gone-burgers anyway :)

I have for this year until i can see the direction or the knives stop falling, I look at is I would rather take a year of poor returns lock in my gains and change back to growth once it settles
we are headed for a bear market in most overseas market (already there in aussie) so we will know around the middle of this year what kind of bear it will be shallow and long or big drop and rebuild
once we hit bottom and start up again I will go max growth as that will be the best buying time for shares