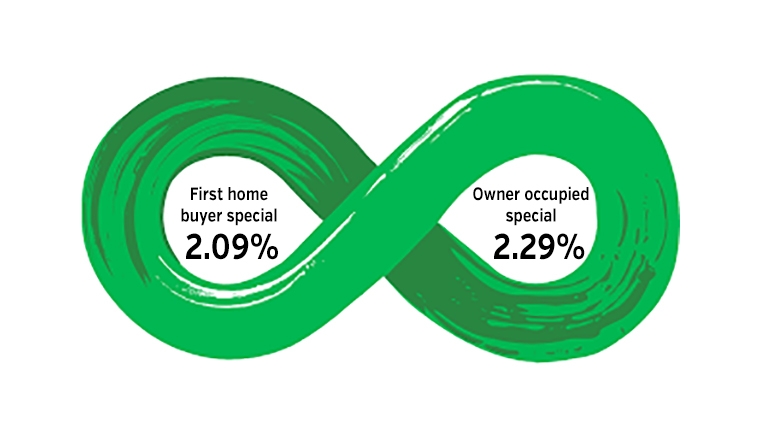 The Co-operative Bank has cut its 'owner-occupied' home loan rates for fixed terms of six months to two years with offers that are more than competitive with the main banks.

And to add to the competitive challenge, it has raised (yes, raised) its six and nine month term deposit rates. They are still low, but it is an unusual move at this time.

The most eye-catching is that 2.09% one year rate for FHBs. It must be a first loan of at least $200,000 for a home the buyer will occupy. It requires at least 20% equity. And it can be used for Kainga Ora First Home Loans.

Other owner-occupiers can get home loans from Co-op at 2.29% pa for fixed terms of six months or one year. That six month rate is easily the lowest for that term in this market. Their new rates for 18 months and 24 months fixed are now 2.59% and for a two year term, that either matches or beats the carded offers from the five big banks.

CEO David Cunningham says the Co-operative Bank was the first bank to draw under the Reserve Bank's Funding for Lending Programme (FLP), with $40 million drawn on 11 December. Through the FLP the Reserve Bank is offering banks up to $28 billion of funding priced at the 0.25% Official Cash Rate.

"The FLP funding has supported our First Home Buyers offer, which I think is very consistent with the intent of the programme. We’ve seen really good take-up of the First Home Buyers offer, with 70% of lending under the offer being to new customers to the Bank – both via mortgage brokers and directly through our branch network.  A good proportion is for Kāinga Ora First Home Loans," Cunningham said.

As we have noted before, some rates from Heartland and HSBC are lower, but these new Co-operative Bank mortgage rates position their offers very competitively.

At the same time, they have raised their six month term deposit offer to 1.00% (+10 bps) and their nine month rate to 0.95% (+5 bps). Any rise in TD rates is unusual at this time, and both these new rates are about +20 bps higher than the main banks (even if they about match other challenger banks). They trimmed their one year rate by -5 bps to 1.00%, but it's still higher than the main banks.

1%? The nasal swab of investments.

Damn might have to try and be cheeky with ANZ and see if they want to drop my rate I locked in last month haha :P

I have a theory: they don't.

Let me know if I'm wrong though!

Orr will be having a word to them. Interest rates can only go in one direction at the moment and that is down.

"Any rise in TD rates is unusual at this time"
I'm only guessing but if Co-op is drawing down on FLP at 0.25% there may be a RBNZ requirement to have a certain level of other funding hence a need to attract that. However; whatever, $40m at 0.25% gives them breathing room to be able to attract additional funds at higher rates.
Great to see that 2.09% FHB rate.

Glad, some clever bank head the call... FLP into more housing productivity. NZ sky high rocketing cost must go ahead up still, as economic depends on it.