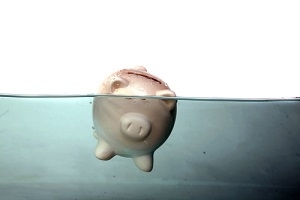 The amount of new mortgage debt New Zealanders are taking out has hit a new high.

Borrowers last week took out $1.556 billion of housing loans – the most since Reserve Bank (RBNZ) records began in 2003.

Yet the volume of mortgages taken out wasn't near highs from the past, indicating people are taking out larger loans.

The total value of weekly mortgage approvals also got close to the levels reached last week, in April this year and December last year.

Looking at the number of mortgage approvals, there have been quite a few occasions since 2003 when this figure has surpassed where it was at last week.

The highest weekly number of mortgages approved, based on the Reserve Bank series, occurred in the week ended December 15, 2006. With 11,193 approvals, the average mortgage value was only $133,208.

REINZ figures show the median house price across the country peaked at $484,650 at the end of September. While it’s dropped off a bit since then, it was 15% higher than the same period the previous year, and 21% higher than in September 2013.

Can we really afford to be taking out larger loans for more expensive houses?

The answer is not without a reasonable level of risk, with household debt as a percentage of nominal disposable income at 159%.

The last time this percentage was this high, was during the 2008/9 global financial crisis, when it hovered around 160% and hit 161%.

"Existing borrowers are taking advantage of low interest rates to make increased debt repayments which, excluding repayments made on the sale of property, are equivalent to 20% of disposable income. However, substantial new lending activity has offset the impact of debt repayment.

"Rising house prices have placed upward pressure on the DTI of new lending, which is currently well above the DTI of outstanding debt. Elevated DTIs increase the vulnerability of households to a change in economic conditions, such as a rise in interest rates or unemployment."

Statistics New Zealand figures also show weekly average wages and salaries (before tax) only increased by 3.5% from the June quarter last year, and 9.9% from 2013, to $566.

The average weekly income from all sources (wages, salaries, self-employed, government transfers, investments and other transfers) sits at $800. This has increased by only 2.7% from 2014 and 8.5% from 2013.

This graph from the Financial Stability Report shows just how unaffordable houses are in Auckland. 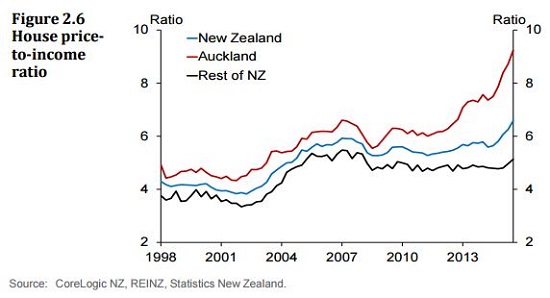 “Declining borrowing costs can partly explain the 17% increase in house prices over the past year.

“Notably, a significant proportion of mortgage lending is being undertaken at elevated debt-to-income ratios.

“Although low mortgage rates are currently relieving pressure on these indebted households, some borrowers could quickly come under pressure if their labour incomes decline or mortgage rates increase.”

In August Wheeler's deputy, Grant Spencer, pointed out 30% of new borrowers take on mortgages at greater than six times income. At these ratios, Spencer noted, it would not take much of an increase in interest rates to substantially erode mortgage affordability.

Auckland only mortgage size average would be interesting. And excluding top ups.
A 216,000 mortgage wouldn't go far for buying a house.

That's a trap.
The RBNZ reports the numbers of mortgage instruments written during the period. Many mortgagees have multiple split mortgages over their houses - split into separate fixed and floating components

A decent chunk of this will be refinances. We are seeing a lot of refinancing activity at the moment due to the very low rates and cash back incentives.