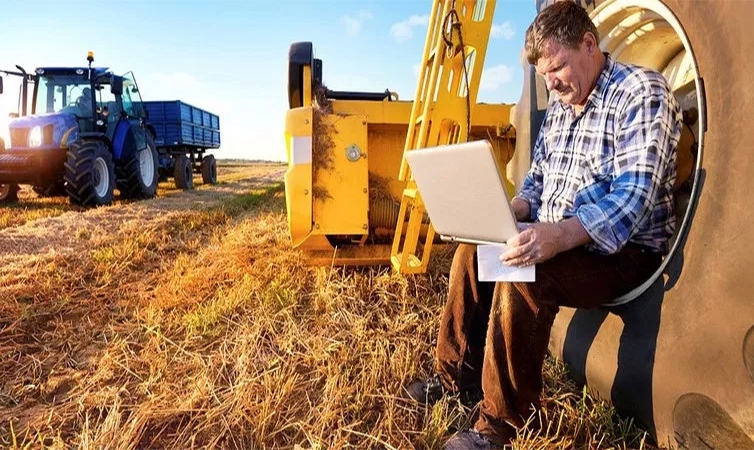 “I don’t believe there’s a justification here for there to be a blow to rural communities,” Robertson said.

Federated Farmers and the National Party are among those concerned that if banks restrict their lending, or charge higher interest rates, to mitigate the effects of tougher capital requirements, dairy farmers will be hardest hit.

The thinking is that a bank keen to maintain or boost its profit to keep shareholders happy while it pays a higher premium to insure itself against the risk of a financial crisis, might be hesitant to lend to a sector that has high debt and also faces environmental challenges.

Robertson didn’t go so far as to say he would intervene to protect higher risk borrowers in the face of the new rules, which the RBNZ expects will increase interest rates by an average of 20.5 basis points in the long-run, and see banks restrict their lending by 2.2 basis points in the short-term.

However, he said: “I think it is very important that no bank uses this as an opportunity to target a particular sector. There is no need for that…

Figures released by the RBNZ on Thursday show the big four banks - ANZ, ASB, BNZ and Westpac - had the highest return on shareholders' equity last year out of 14 developed countries.

“There is now a seven-year timeframe [rather than a five-year one as initially proposed] in which banks are able to work with the RBNZ on a plan," Robertson said.

“I am confident this can be managed."

He reiterated at a media conference on Thursday that the changes being made relate to the level of capital, not the risk allocation of capital.

He also made the point that some banks over-exposed to dairy have been reducing their exposures to the sector, regardless of the RBNZ’s requirements.

“It’s only a part of the dairy sector that is highly negative, and that is for a specific idiosyncratic set of reasons established by banks and borrowers. That’s the nub of it.

“We can’t set policy based on a few. This is based on the nation and the banking sector as a whole.”

The RBNZ, in its November Financial Stability Report, explained: "Dairy sector debt decreased by 0.9% in the year to September.

"The contraction in credit reflects banks’ reduced appetite to lend to the sector and a decline in demand for new loans.

"Banks expect to tighten credit availability further over the next six months. 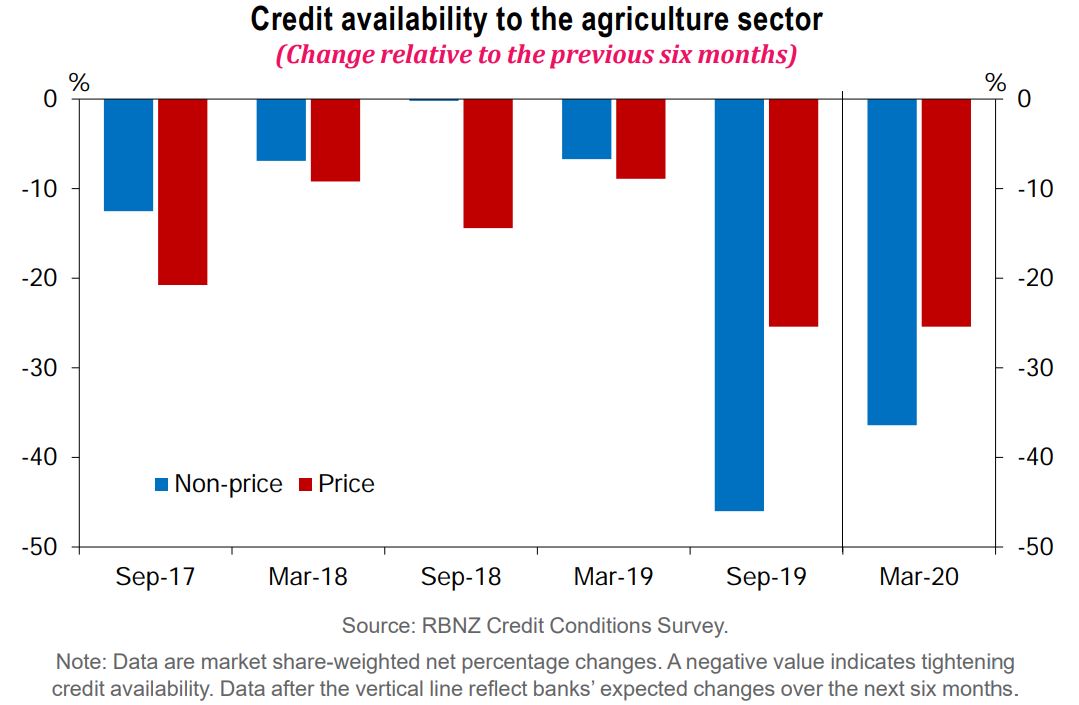 "A number of factors are contributing to this trend, including a desire to diversify agricultural exposures, and a re-evaluation of lending portfolios to manage the transition to higher capital levels.

"In particular, banks may seek to reduce the availability of standby facilities that carry ongoing capital requirements irrespective of any drawdowns, and raise interest rates on riskier loans."

Why banks have been reducing their exposures to dairy

The dairy sector has a high debt-to-income ratio at 350%, and debt in the dairy sector is concentrated, with 30% of debt held by highly indebted farms

“While current prices are supportive of farm profitability, significant pockets of debt remain vulnerable to a price downturn and the sector is facing a range of challenges to its long-term outlook," the RBNZ said.

“Progress has been made by some borrowers in reducing debt and restoring balance sheet sustainability. However, the most indebted farms have struggled to achieve profitability and repay debt.

“A significant share of dairy loans are still being closely monitored by banks, and the share of loans that are non-performing has increased.” 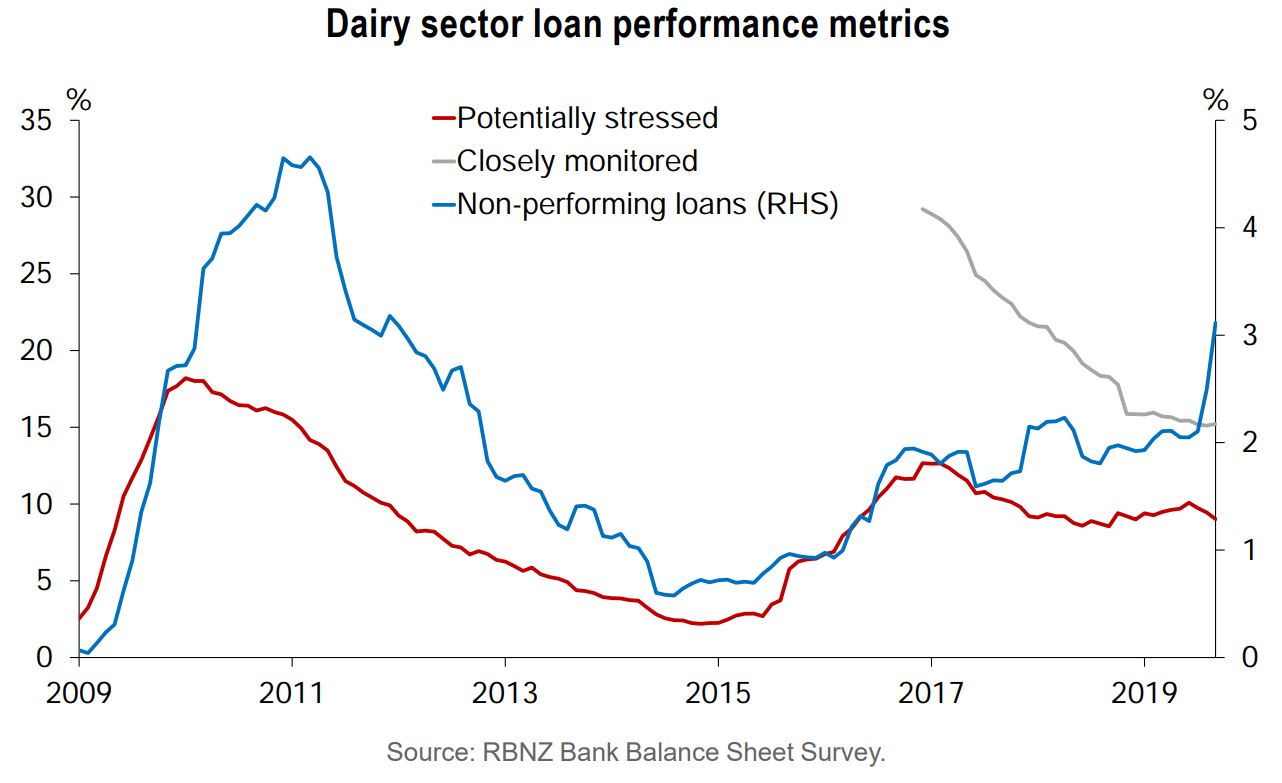 The agriculture sector accounts for around 14% of financial system lending. Two thirds of this goes towards dairy. 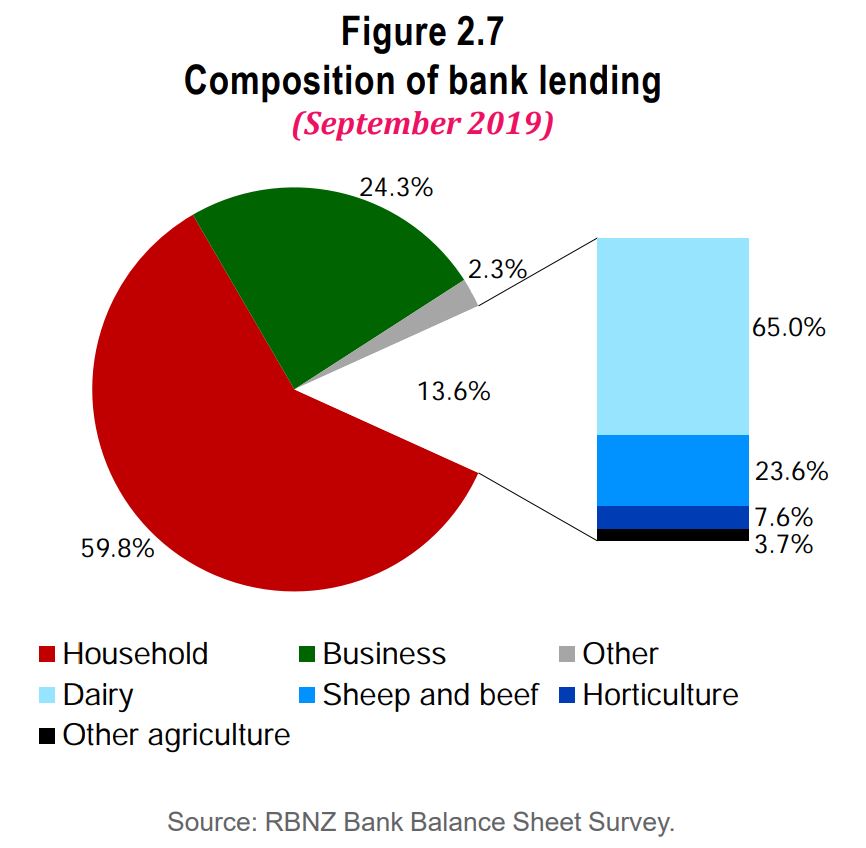 The limited familiarity I have with farming practices is that some farmers have been using their bank manager as a business adviser, fundamentally failing to understand that the bank is not a neutral party but has a vested interest in making loans to the business. I have always suspected that bank practices around farm (and residential) loans is shonky at best, being too keen to encourage their clients to go into debt under marginal conditions. Worse, they didn't seem to learn anything from the 2008 GFC, and of course the regulators were more than a few laps behind them, thus 11 years later our reserve bank is finally taking some action.

Farmers should be better business managers too, but then they are not the only ones who get into business on a hope and prayer.

Most farmers I've met are very astute. More so than many finance types in businesses I've worked. Small sample sizes though. Fonterra forecast v final milk payouts are probably one source of trouble. I think this has been covered on interest before.

murray 86 - I agree - bank managers were promoted as being part of an advisory team all successful farmers should have around the table when we made decisions but were often just another sales rep.

if I was a highly indebted dairy farmer i would not be confident that my bank would exercise restraint because of grant robertsons expectations.if they really cared they could have hurried through the farm debt mediation bill.

The FDMB when passed will be another reason banks will add a premium on loans to farmers.

Less debt and more equity is good for farmers

For those that can survive the new higher interest rates the banks will now charge or who can continue trading when their line of credit disappears.

As Adrian Orr said. The Aussie banks are hugely profitable here and if they don't like it there will be plenty of others willing to take their place. (It would be great if they were Kiwi owned banks)

However, he said: “I think it is very important that no bank uses this as an opportunity to target a particular sector. There is no need for that…

Whoa!!! - step back into reality:
Around two thirds of NZ households have no mortgage debt - the debt to income ratio changes dramatically when those without mortgages are excluded. Moreover, given the iniquity of the risk weighted asset regulatory capital scheme, around sixty percent of bank lending is allocated to residential real estate for one third of households.
Can banks justify rising concentration and credit risks by extending mortgage debt to a minority of NZ households and at the same time starve the debt dependent means of production and wages anymore than they already do? Link

Well I can tell you Rabobank is picking up a lot of disgruntled farmers from the big 4 aussie banks putting pressure on to paydown debt (even using their overdrafts?).I like the fact that Rabo being a co-operative conservative bank-stress tests all new & exsisting clients to make sure of sound cashflow,security,communication,also being agri-focused only,they really look after you in all situations.

I have sheep and beef farmer friends who have moved from ANZ after pressure to Rabo, the TBTF dairy clients just keep on trucking.

Banks have responsibility to fight climate change and end the pollution, my accountant explained it all to me when I inquired about the profitability of buying dairy farms and converting them to forests for carbon credits and saving the planet. His advice was to wait until the banks, council and government have driven farmers to ruin, then snap up the prime pine land.

I really question farmers complaining that they are under so much pressure paying the interest on debt. This is a real worry and you really have to strongly question their wisdom if not intelligence. The debt that they take on is an entirely voluntary action and right now interest rates are as low as we have seen for a long time, if not ever seen. No sane person should be taking on so much debt that they are having problems paying interest at these low rates because when rates inevitably rise they will not be able to pay the higher figures and go broke. Plain irresponsible and it is hard to have much sympathy.

Farmers are special in NZ...backbone of country so kid gloves should always be issued.

Do you really want people that dumb controlling the backbone of the country?

I agree wholeheartedly on repaying debt Chris. Thankfully our bank has always kept us on 15 year table mortgages.
A few people made a lot of money climbing the rural property ladder with interest only loans. Then there were those that used those ifl's and sat on them. I know a few. I could tell the story of someone who hasnt paid a cent in principal in the last 20 years. They have savings and a superannuation that has made good returns. I dont know the math but I believe compounding interest also works in favour of paying off a loan. But this person insists c.i. is better on the super.
The next thing is tax. The more principle you pay the more tax in general. This is a conundrum for many. You want to pay principle, but this then can give you a large tax bill. So its a double edged sword. I have mentioned this on Interest before. Did the farmers or anybody buying a business in inflated times give a thought to how much tax they were booking as they paid off their business.
I would imagine there are many farmers out there currently being stung with massive tax bills as the banks force principle repayments. Very few farms are selling. This is something a lot of people never envisioned. I think they thought when they sold at inflated values and repaid the interest free loans they were home scott free. I mean everyone kept saying property prices only ever go up. Hmm. Go talk to a dairy farmer right now. If the land is not suitable for horticulture its been years since values increased. And there are many farmers out there stuck with the ownership of a business they dont want anymore.

Couldn't agree more Belle-every farmer wants to pay down debt,but as a Fonterra shareholder we have the hangover of nil dividend,debt incurred from $3.90 payout,still having to purchase shares with every extra kg of milksolids produced.It is ironic & frustrating in a time when we have low interest rates & high payout your profit is being directed away from debt servicing-problem also is you need to be earning $1.30 profit to cover $1 debt for tax implications,our costs have increased ,farm/cow/share values have decreased-it is very difficult for those wanting to exit,for most this is their superannuaton fund.

Just a thought. Government must love higher valuations on businesses and farms. Principle repayments attract tax. Such a lot of tax.