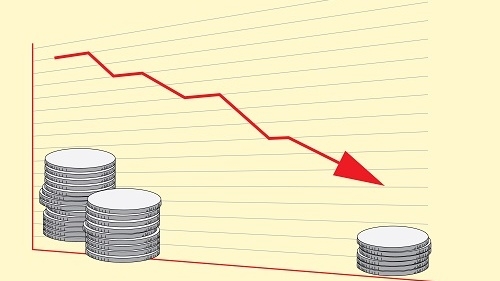 ANZ economists say financial markets - particularly stock markets - are overly optimistic in their anticipation of the speed the global economy will recover.

And the economists, in their ANZ Weekly Focus, say that solvency issues are expected to come to the fore.

"In time, firm difficulties and the severity and length of the global slump will become apparent," they say.

"...If we are right that markets are too optimistic about the economic outlook, the question then becomes: when will the chickens come home to roost?"

The economists say they can’t say exactly, as picking the timing of such things is notoriously difficult. However...

"Our hunch is that it will happen when (a) a big borrower unexpectedly defaults; or (b) when shock revaluations in correlated markets like real estate lead investors to question asset-allocation strategies."

At the moment, there is heightened demand for credit, they say.

"And if we see a significant sell off in credit markets that swamp the market’s ability to absorb it, this could set off a chain reaction.

"We see scope for this dynamic to rear its head through the middle of the year."

They say this would weigh on risk- and trade-sensitive currencies like the New Zealand dollar (NZD) and Australian dollar (AUD), and could also see upward pressure on yields in domestic credit markets.

This would put more pressure on the Reserve Bank to provide further stimulus and soothe markets.

"Increased volatility is also very likely. We are forecasting the NZD lower through the middle of this year – on a trade-weighted basis, against the USD and to a lesser extent against the AUD."

The economists say In the past, rising default rates and solvency concerns have triggered a "re-pricing of risk" and often set off a chain-reaction of events that has been difficult to contain.

"Default rates rose after the GFC, but that crisis was primarily about liquidity, and central bank actions ultimately succeeded in arresting the trend and restoring some order.

"This time around, some global companies are facing liquidity concerns, but many more are facing solvency concerns."

The economists note that central banks are buying "an enormous amount of assets", including corporate paper.

"But providing liquidity in this way can only go so far. It reduces risk premia, lowers debt-servicing costs and expands credit. But it can’t solve fundamental solvency issues where they exist.

"And with central bank balance sheets already stretched, we question whether they have the resources and willingness to intervene in these markets, let alone succeed.

"Our modelling points to a larger and more rapid spike in US defaults than in the GFC if the global economy is slow to recovery as we expect. And not surprisingly, our models therefore point to a substantial widening in credit spreads." 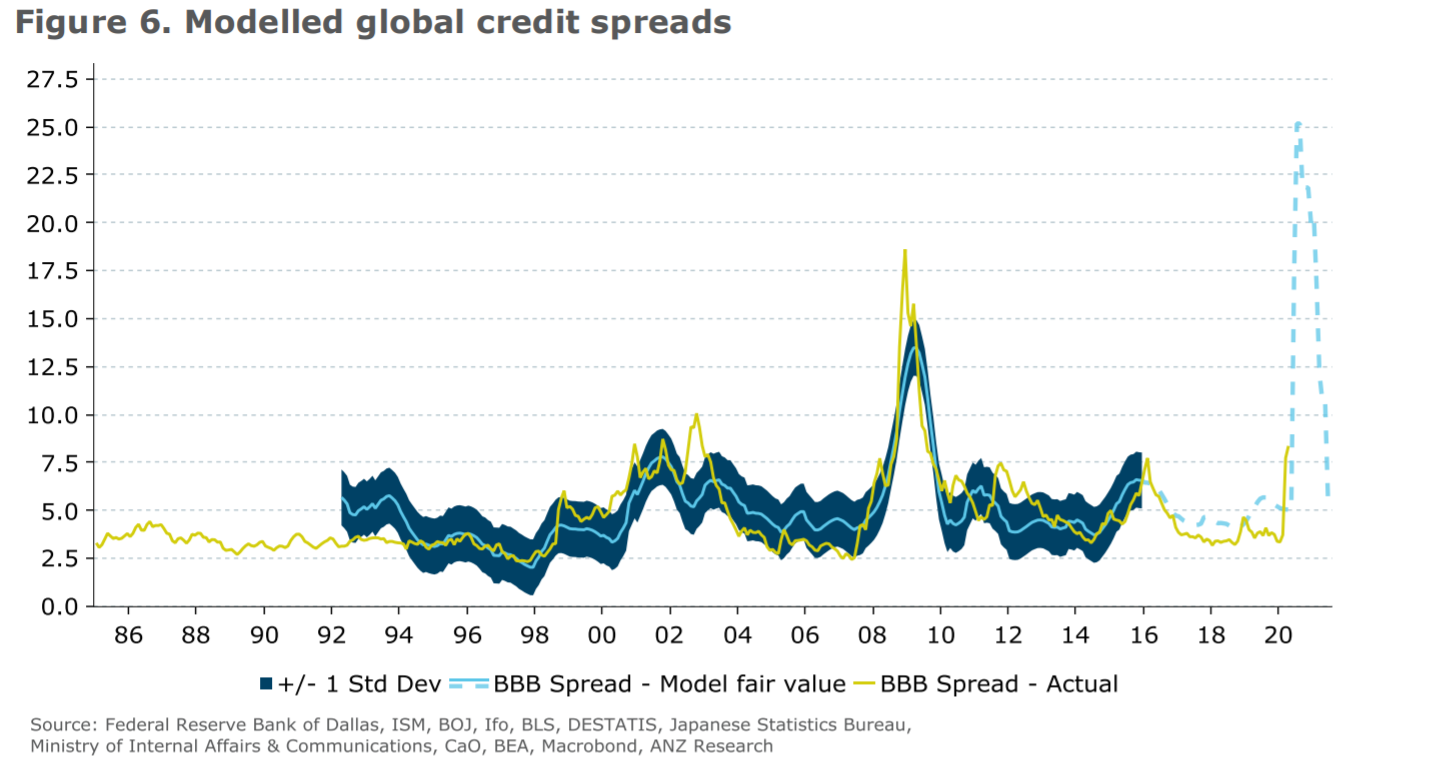 The ANZ economists say the world has become a lot riskier, but lenders aren’t yet getting what’s historically been considered reasonable compensation for that fact

"If we assume that the recovery is swift and feeds through to some easing of lending standards, then our modelled move in spreads is relatively inverted-V-shaped.

"For now, it looks like investors are assuming as much, with some liquidity provision by central banks helping bridge the gap.

"But this spread is the modelled spread on the credits that survive.

"If defaults rise, as our models indicate, then the borrowers that go under will leave losses in their wake.

"And our modelling may be too optimistic: actual spreads may recover more gradually than our model indicates, as fear and sour memories often take some time to fade.

"A longer recovery, with a higher unemployment rate, would add risk to current pricing, which assumes a short duration and benign default cycle."

This mirrors my view. Our market is up very strongly today and is now only around 10% off its peak in late Feb.

I know that it is somewhat skewed by companies like A2 and F&P H'care, but I believe that the outlook is much less positive than the market is currently pricing in. I have bought nothing and indeed, have used the momentum of the past couple of weeks to extract more from the market. Cash now accounts for over 30% of my total portfolio-shares, bonds and rental property. I expect to see the market to at least test the point it reached in early March and quite possibly below that. The NZX50 at 8000? Selective buying would then start to look interesting.

It's the strength in the US market I'm surprised at. As you note a lot of our index is companies like ATM/FPH and then the utilities - everything was sold cheap in March (some steep bond yields too). I agree things should drop again, but I don't know if it would get back to the March bargains. I bought a (tiny) few Trustpower @ $4.40 with the available cash at the time. Always pretty weighted towards cash, though with decreasing deposit rates still seeing if there's anything in secondary market bonds. The good ones have mostly reverted to normal yields though.

The strength you've mentioned a bit like Adrenaline shot surge during accident, every Nations on the planet throw out everything frantically at speed financial reprieve means.. the effect is like that, a temp calming period. We just don't know how bad/pain it is currently. tick tick tick tick..

I see what you mean. But I must admit that I am very tempted to buy into this market. My point is: considering that rates will be kept at historical minimum for a long time, and considering the further massive QE coming, people who seek some yield will have the sharemarket as the only remaining avenue. If you buy unhedged, then you can also exploit the future decline in the NZ dollar.
Very risky I know (and I can see the index reflecting less and less the economic reality), but so very tempting....

Fitting, as the NZX is up 3% today, and around 26% since level 4 lock down began last month.

For now, at least.

Yip - up another 3% while steel and tube lose 200 employees. There's trouble brewing but the index keeps going up (same globally at least!)

Indeed. When defaults come and recovery not V shaped, the real fun begins
meanwhile, its extend and pretend

I've read the U & V shaped advocating writing today here in interest.co.nz - This could be true.. or .. Not? - sadly, for now personally I'm leaning towards the Not camp. As my estimate the 2021 will be reckoning fast for NZ only newest back bone, China. It's hard to fathom, but I can see as how the US, OZ leads the rest of the world... asking China for accountability, compensation.. worst? decoupling their economic back bone production from reliance on Made in China..hmn, interesting outlook ahead.

There cannot be a recovery now, unless it be courtesy of unrepayable debt.

The question is whether banks shy away from issuing it.

But then, they'd be dead that way too.

true...but IBGYBG is the mantra

GFC= 'Global' Financial Crisis, what is the effect that time on some of the F.I.RE economic countries?
GPC= 'Global' Pandemic Crisis, targeting people movement=capital movement, the effect is still fluid right now.

Some major shareholders of some companies are unloading part of their shareholdings. Logically, the share prices ought to have dipped. Instead the share prices spike up. PUMP & DUMP????.Joblessness, businesses shuttered, layoffs. The losses have yet to be computed. Yet, share-market has taken off in the opposite trajectory. Why? A dead cat bounce, sucker's rally ?? Well, time will tell. And it may come sooner than later!!

Jaf, the power of money greed, profitable investment has gone along way from meaningful regulatory ways, it means the influence of profit/wealth overtook those regulatory measures towards the have side of equations. You look at housing/property, at share market you've mentioned, at tobacco/vaping industry, alcohol industry, gambling industry etc. When prudent approach asserted, those in profit will cry foul at any means.. here's another example of hidden vested interest; when a clear worldwide dark cloud heading? then it come with 'creative' solutions, this might be honest & true, for example asking future tax payers/govt. to decide on bail out. eg. buying all those old stock of AirBnB directed at National level for social housing... the catch? the price to pay...everyone wanted on 'market value' a rigged valuation.
https://www.stuff.co.nz/business/prosper/finances/121298319/covid19-res…

If March 31st figures don't spook investors (which they should) wait until the second quarter figures come out. Im 90% cash and waiting. If stocks don't tank I will throw in the investing towel and chalk my 30 years of investing up to a complete misunderstanding of how it all works.