The incoming Labour Government is being met by business confidence levels that while down, are continuing to improve, quite sharply.

And crucially also, in terms of the outlook for the coming months, firms are getting much more upbeat about the prospect of taking on more staff.

The last business confidence survey to be conducted before the election - and first to have the results released after - shows a turnaround in the number of businesses reporting an increase in their own trading activity.

The latest New Zealand Institute of Economic Research (NZIER) Quarterly Survey of Business Opinion (QSBO) shows that a net 1% of businesses reported an increase in own trading activity.

Doesn't on the face of it sound great, but it's a sharp turnaround from the net 37% reporting a decline in the previous quarter.

"This result supports our expectations of a V-shaped recovery in economic activity, as the New Zealand economy responds to the unprecedented amount of stimulus measures implemented by the Government and Reserve Bank," NZIER principal economist Christina Leung said.

"Nonetheless, businesses on the whole are still feeling downbeat, but this pessimism is reducing with a net 39% of businesses expecting a deterioration in general economic conditions over the coming months – lower than the 58% in the previous quarter.

Bank economists were reasonably cautious on the survey results.

"...We remain of the view that the rebound will run out of puff, especially as we move into 2021," ANZ senior economist Liz Kendall said.

"At that point, the challenges associated with the current downturn will become more apparent and current expectations and intentions may not be borne out."

ASB senior economist Mark Smith said the outlook for the economy beyond the expected third-quarter bounce in activity remains highly uncertain and firms remain cautious on the investment front.

Westpac senior economist Satish Ranchhod said the survey results did not not provide any "major challenge" to Westpac's forecasts.

"We’ve been forecasting a stronger rebound in activity than the [Reserve Bank] assumed in their last published forecasts from August. Recent data has been supportive of that view. However, as such a recovery has already been flagged by a range of indicators, we don’t think today’s result will be much of a surprise to the RBNZ."

Leung said NZIER had surveyed firms over an extended period from September 17 to October 13.

"This means the latest QSBO captures the effects of the discovery of new community cases in Auckland on 11 August which saw the region move back up to Alert Level 3 while the rest of the country moved to Alert Level 2. The survey period over this quarter was extended given the disruptions, particularly with the enforcement of another lockdown in Auckland."

The survey has found that the building sector is now the most confident.

"An improved pipeline of construction work has driven a turnaround in construction sector sentiment, with the building sector now the most buoyant of the sectors surveyed. 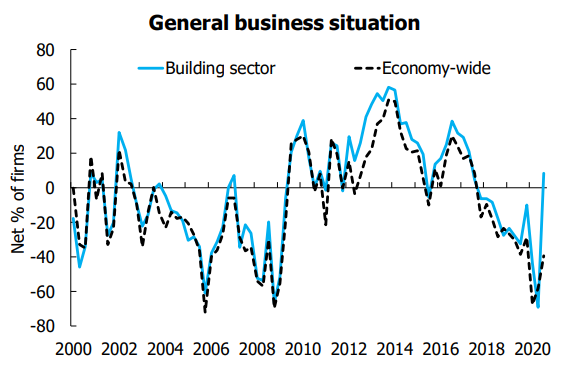 More generally, firms are now much more positive about hiring and investment.

"As demand picks up, firms are feeling more positive about expanding," Leung said.

"This is particularly the case when it comes to hiring, with a net 16% of firms looking to increase headcount in the next quarter.

"This recovery in employment demand has seen skilled labour shortages re-emerge, with a net 18% of businesses reporting difficulty in finding skilled labour.

"Although firms are still cautious about investment with a net 10% of businesses planning to cut back on investment in buildings, this caution is ebbing.

Manufacturers are also feeling less pessimistic, despite weak export sales in the September quarter. Profitability expectations are improving, and that is making manufacturers feel more positive about hiring.

The services sector is now the most pessimistic of the sectors surveyed, with a net 49% of firms expecting a worsening in general economic conditions over the coming months.

"The lockdown and border restrictions have had a severe negative impact on accommodation and hospitality businesses, and there remains a large degree of uncertainty over when restrictions will be relaxed," Leung said.

The NZIER has conducted its Quarterly Survey of Business Opinion since 1961. It is New Zealand’s longest-running business opinion survey. Each quarter about 4,300 firms are asked whether business conditions will deteriorate, stay the same, or improve. The NZIER says the responses "yield information about business trends much faster than official statistics and act as valuable leading indicators about the future state of the New Zealand economy".

Net 7% after billions announced for shovel-ready projects, schools, hospitals and transport upgrade programmes, councils hurrying to fix 3-water woes, chronic shortage in accommodation across all major urban areas, and rush among private and public sector landlords to meet new home standards.
Add to that a rise in new apprentices, priority being given to construction and infrastructure workers in MIQ and fewer skilled construction workers leaving NZ.

Are we missing something here?

It's just another survey
There are 500,000 businesses in NZ
This survey comprised 4300 respondents
That is 0.0086% of businesses
Dont suppose they were travel agents, cafes, hotels, motels, milk bars and liquor shops
Be more believable if the survey asked what their turnover was for the quarter compared to last quarter

Most data we see is from surveys and 0.86% is actually quite a lot. The Household Economic Survey from StatsNZ has a sample size under 3500.

Also, read the last para of the publication again: The lockdown and border restrictions have had a severe negative impact on accommodation and hospitality businesses, and there remains a large degree of uncertainty over when restrictions will be relaxed