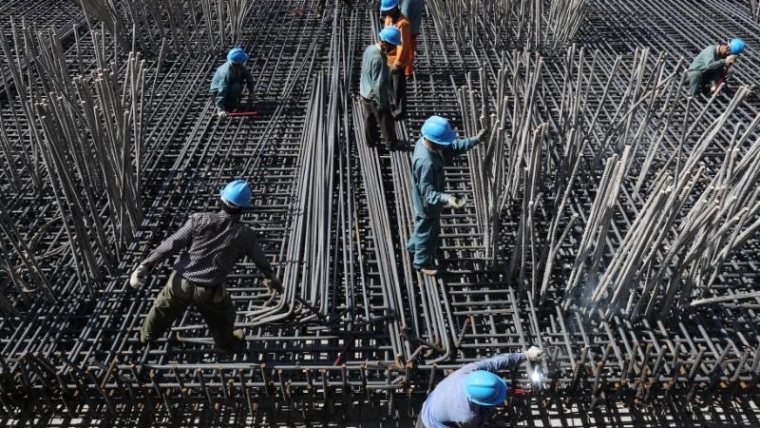 As our politicians, economists and financial/investment markets contemplate and debate how and when we are going to extract ourselves from a one month lockdown of economic hibernation, it does provide time to reflect on what could drive the value of the New Zealand dollar over coming years.

Recent reports from the OECD, IMF and credit rating agencies all seem to be concluding that the NZ economy is going to be hit far worse than others because we went into full lockdown.

It would be easy to conclude that the NZ dollar value would have more downside from these pessimistic reports. A more likely scenario is that we took our tough medicine earlier and harder than others to shorten the time period of the overall adverse economic impact, therefore we stand in very good stead to rebound stronger and earlier as China and Asia (which we are part of) recover much earlier than Europe and the US.

Where the AUD goes, the NZD follows

Standing back from the daily news of progress to contain, control and eradicate the Covid19 pandemic, it should not be forgotten that the NZD/USD exchange rate closely tracks the movements of the AUD/USD rate in the forex markets for 80% of the time. When we dislocate away from the Aussie dollar for 20% of the time, we witness the dramatic shifts up and down in the NZD/AUD cross-rate. Over the last five years the NZD/AUD cross-rate has shimmied between 0.9000 and 0.9700 (apart from very brief breakouts below and above that band).

Therefore, it goes without saying that any commentary and analysis on the NZ dollar needs to include a very large dose of Australian dollar content.

The Aussie dollar has largely been out of favour with international investors over the last eight years for a whole host of reasons and it was one of the first currencies to be slammed down very hard in early March when it emerged that the Chinese economy was at severe risk to the coronavirus. From levels near 0.6700 to the USD in early March, the AUD rate fell off a cliff to a low of 0.5550 on 19 March - a 17% depreciation over a 10-day period. The global scramble for a short supply of US dollars caused the fall. The NZD/USD rate followed the Aussie dollar down, however by a smaller degree – plunging 13% over the same time period.

The immediate 14% recovery of the Australian dollar over the last three weeks from 0.5550 to 0.6350 against the USD has been remarkable. The FX market’s instant re-rating of the Australian currency higher being based upon Australia’s large scale/definitive fiscal and monetary rescue packages, the possibility of a big Chinese infrastructure spend (similar to 2010) and the massive increase in global supply of USD’s from the Fed’s quantitative easing.

Having staged the impressive recovery to 0.6350, what will be the next direction and trend for the Aussie dollar? The answer to that question will largely provide to us the future fortunes of the Kiwi dollar against the USD.

The last decade has seen four distinct trends in the AUD exchange rate against the USD. A major uptrend followed by a major downtrend, and then a smaller uptrend and a small downtrend. The following chart depicts the four periods of AUD/USD currency movements: -

The Covid19 health and economic shock in February/March 2020 plummeting the AUD/USD rate to below the 2009 GFC lows of 0.6000. Further AUD appreciation over coming weeks/months to 0.7000 would see it break above its multi-year downtrend line that it has traded below since 2013.

It is still anticipated that the Chinese government will announce major fiscal stimulation to their economy through infrastructure building when they see the downturn in their manufactured exports due to weaker demand from Europe and the US.

The Australian dollar looks set, once again, to be a big beneficiary (through higher hard commodity prices) of that Chinese economic policy shift. 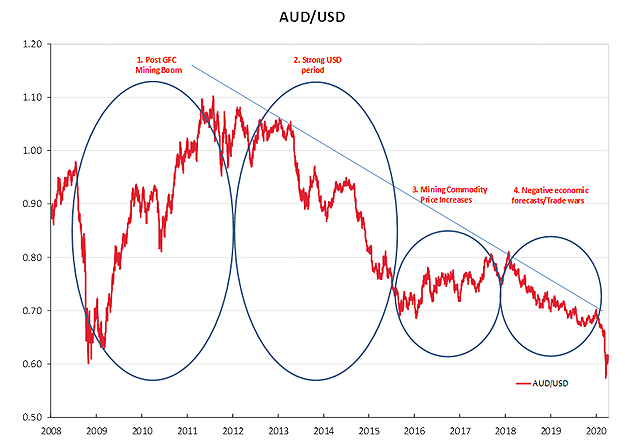 Have you factored in the rapidly growing hatred of China by the Aussie public?

Australia is also likely to benefit from the 'return to localism' of some Anglosphere countries - manufacturing in particular and supply chains in general. Oz produces about 40% of the world supply of lithium from two modest holes in WA (Greenbushes and Mt Cattlin), is looking at rare earths from a polyminerals site near Dubbo, and of course produces iron ore (Tom Price and the NW of WA generally), tin (Renison Bell in TAS), gold (everywhere) and so on. Localising manufacturing needs raw materials to smelt, purify, mould, bash, cast etc, and these aren't evenly distributed around friendly nations.

Aussie will be fine in the long run , get back to basics , grow enough food to feed themselves and slowly get their mines back to where they were .

This lockdown has been interesting ,we actually need very little other than food , water and electricity to get by

Akh another input from blue band... Everything, anything strongly connected with China, will survive.. guess what Roger? the same should be said for UK, Canada, US too.. since 70's into this F.I.RE economy. Post GFC all their GDP number supported by easy credit flowing from Far East..Capital outflow=people movement=to make magic weapon working. No people movement=No capital outflow=no tourist, no student, no restos, empty hotel - How about if 2021? after this second Pearl Harbour event, the whole world may follow US? in the great de-couple from made in China, China artificially high reserve and world source of cheaper productions.. is as good as the world willingness to keep on buying/resource it from them.

neoliberal creators, contributors, protectors, actors in this crash movie are easily identified, mostly males & always advises/act to socialise the private debt loss, they purposely created a program 'without' undo button - in hardship? magically pointed to the one easiest solution of the day, no one seen this ugly duckling this year, possible black swan next year?: naa..
https://www.scoop.co.nz/stories/HL1507/S00101/the-fire-economy-new-zeal…
https://www.youtube.com/watch?v=MGrBCtOt4Qs

I disagree. Starting from a logical premise: There is almost zero probability that we'll ever eradicate nCoV, however there's a real chance that we'll never find an effective cure or vaccine. If that's true then attaining heard immunity is critical, particularly among young people where the mortality rate is lower. We know now that the CFR is as low as 0.35% from the German data, although they have 30 ICU beds / 100K people and we only have 3. How long before tourists can come back? How long before the lock down completely ends. Will all that depend on the number of people with nCoV antibodies? Countries that can extricate themselves from this mess the fastest will suffer the least economic damage in my opinion.

Nick Smyth RBNZ expected to raise the OCR by 50bps this week. Market focus on the forecast OCR track