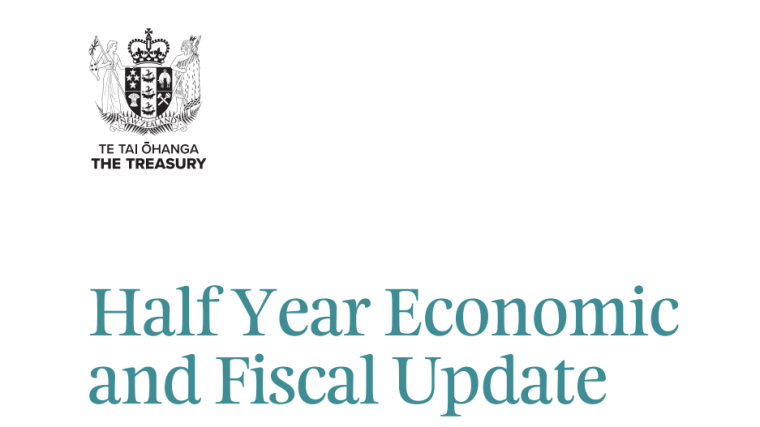 Westpac economists say this week's half-year economic and fiscal update (HYEFU) is likely to show markedly upgraded Treasury economic forecasts and a lower requirement for Government borrowing - perhaps by as much as $30 billion over the next four years.

In their Weekly Economic Commentary the Westpac economists say up to now, the Treasury’s economic forecasts have been markedly downbeat, "despite the mounting evidence that the economy had rebounded readily from the lockdown".

"We believe the Treasury is now on board with that view, and is set to revise up its forecasts significantly."

The economist say this will mean a stronger expected tax take, and smaller (though still large) operating deficits over the next few years.

"Previously, the Treasury had forecast a deficit of over $31 billion for the June 2021 fiscal year. But in the four months to October alone the deficit has come in almost $5 billion less than expected. Around two-thirds of that is due to a stronger tax take, relative to the Treasury’s downbeat forecasts. The rest is due to lower spending, in particular a much lower than assumed uptake of the extended wage subsidy scheme.

"Smaller deficits over the next few years will mean a lower borrowing requirement, compared to what was announced at the pre-election fiscal update in September (which in turn was reduced relative to the May Budget).

"Applying our own economic forecasts, the Government’s borrowing requirement over the next four years could be as much as $30 billion lower. We don’t expect that they’ll go quite that far this time, but there is a case for reducing the bond programme by at least $5 billion per year."

The economists such that a reduction in bond issuance will have consequences for the Reserve Bank’s Large-Scale Asset Purchase (LSAP) programme - the so-call quantitative easing (QE). This programme has a current target of buying up to $100 billion of assets by June 2022.

However, the Westpac economists say that with fewer government bonds in the market, buying up to $100 billion of bonds would leave the RBNZ holding more than 60% of the bonds outstanding.

"That’s not a hard limit, but going above that level raises concerns about a loss of liquidity and the potential for market dysfunction."

To avoid this, the RBNZ could either reduce the total size of the LSAP or spread it out over a longer period than two years, they say.

"Either way, this would mean slowing the weekly pace of bond purchases – in fact the RBNZ has already done so in recent weeks. But slowing the pace of purchases would also mean reducing the degree of stimulus being applied, at a time when the RBNZ is still at risk of undershooting its [1%-3%] inflation target."

The economist say they think that over the coming year the Government will need to reassess its Covid response and recovery fund.

"In the May Budget up to $62 billion was approved for this purpose, though not all was allocated at the time. In the pre-election update, the Government indicated that it expected to spend around $58 billion of this amount.

"With a stronger economy and less unemployment than expected, we suspect that the Government is increasingly going to struggle to find things to spend this money on that could reasonably be labelled a Covid response.

"Many of the programmes announced in the Budget had a strong job-creation element, based on forecasts of mass unemployment that haven’t eventuated.

"We expect that some of the fiscal package will eventually be repurposed towards more permanent spending commitments, such as increased funding for health and education."

So where does this money come from that the government borrows and what is its source? Well the answer is that it is created by the government itself through its deficit spending and as a government deficit is equal to a private sector surplus it then becomes our savings.
The governments spending must precede taxation and borrowing as it is the source of our NZ Dollar Currency.
Economist Prof Bill Mitchell explains it all here on his blog. http://bilbo.economicoutlook.net/blog/?p=38885

Its known as debt monetisation
https://en.wikipedia.org/wiki/Debt_monetisation

Long story short. Debt monetisation is inflationary, inflation is a tax on savers, so this is being paid/will be paid for by NZ savers.

That is why we have taxation, it cancels money, it isn't re spent and what money remains in the economy afterwards becomes our savings which isn't inflationary because it isn't being spent either it is residing in government bonds.
Only the government can create net financial assets for the private sector to give us any savings and it must be running deficits for this to happen.
The Levy Economics Institute tells us here that taxation and borrowing don't finance government spending. http://www.levyinstitute.org/publications/can-taxes-and-bonds-finance-g…

Means more room, to borrow, borrow and borrow.. NZ is nowhere near USA, and the RBNZ knew that too. So Kiwis? sit down & relax, nothing to worry about - more come to be sure and more of it if it is necessary.