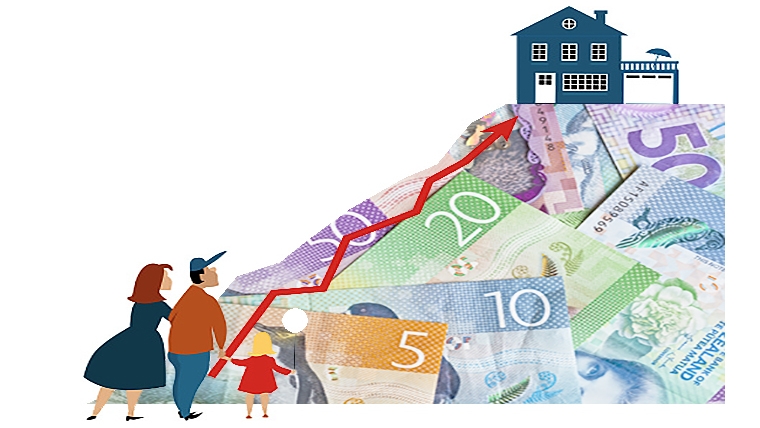 Interest charged by banks to residential mortgage borrowers dropped to its lowest level for any quarter in at least seven years during the June quarter even as mortgage debt continued growing.

Reserve Bank data shows $2.362 billion worth of interest was charged during the June quarter. That's the lowest amount for any quarter in the Reserve Bank's residential mortgage loan reconciliation data series that dates back to the September 2014 quarter.

This comes against the backdrop of separate Reserve Bank figures showing $8.526 billion was advanced for mortgages during June alone, which easily tops the previous June high of $6.8 billion in June 2016. And while the June figure was down on the $8.92 billion borrowed in May, it adds to a string of months all ahead of what was the long-time record for any month of $7.3 billion set in May 2016.

The fall in interest charged has, of course, come with mortgage rates at low levels against the backdrop of a record low Official Cash Rate (OCR) of just 0.25%. The chart below includes the popular one-year fixed-term mortgage rate.The bank average one-year rate was as low as 2.162% earlier this month. However, it has since increased to 2.426% as expectations rise that the Reserve Bank could increase the OCR as soon as August.

Higher mortgage rates will, of course, increase borrowers' interest payments. That means the June quarter low for interest charged could stand for a while. The previous quarterly low was $2.407 billion in the March quarter of this year.

That's interesting. Can we not keep it low for next 30 years please?
Let's just abolish the interest on the money. Reserve bank is using tax payer money. So let's give interest free loans to tax payers.
We are anyway paying lots of free money all over the place, so interest free loans is still better. They will be paying it back.
Most of the free money being given is never going to be paid back.
Should i start a petition? (smiling)

Perpetual housing wealth effect in NZ driving perpetual economic growth - I like it.

We're going to come out of this looking far shinier than our global peers who are wasting their time and resources in modernising their infrastructure, retraining workers and advancing technological research in response to this pandemic.

So on average every single individual in the country is paying approx. $500 a month in interest.

I think home owners are thinking thats money well spent while their houses are going up in value by $10,000 a month [Serious]

Hard to argue that particular point.

Although Poor little Bobby, born at 2.07am this morning will have seen the equivalent of $108k paid in interest before turning 18 and will be expected to shell out near on $3.5 mil for a dunger in Nightcaps so that he can commute to Akld.

Certainly every one is happy that their house is increasing in value. It's a great feeling.
And lots of people buying big cars too.

I am praying that this keeps on going and there should be lot of money printed to go around.
On other hand why do we have so many burglaries all around. Do you not have enough money to go around?

Exactly...short term sugar rush for some parts of society but longer term pain for society as a whole.

This whole economic philosophy reminds me of the band-aid experiement that Kahneman discusses in "Thinking Fast and Slow" and explores whether it is better to experience more pain for a short time, or less pain intensity for a longer term. We're clearly taking the prescription for longer term pain.

We're paying a bit over twice that, and yes, it is money well spent, compared to paying ~$600/week in rent.

This comes against the backdrop of separate Reserve Bank figures showing $8.526 billion was advanced for mortgages during June alone, which easily tops the previous June high of $6.8 billion in June 2016. And while the June figure was down on the $8.92 billion borrowed in May, it adds to a string of months all ahead of what was the long-time record for any month of $7.3 billion set in May 2016.

Please point to the June RBNZ figures - for me, the link - https://www.rbnz.govt.nz/statistics/c5 reports May 2021 as the latest data and will be updated on 30st July, to include the June release. Answers appreciated.

How high are rates really gonna go though?

E.g. US govt debt is 30 trillion - arguably 150 trillion if you take into obligations.
The USA literally can't allow rates to hit 3.5% or they will be spending most of their tax revenue on just covering their interest.

If US sneezes - we catch a cold.

We are at the end of long term debt cycle...
Some call it a debt spiral...

All that government debt and no assets/investments to show for because much of the debt has been created to cover the 'tax relief' given out to wealthy Americans.

The US Federal Government will pass yet another tax cut that that benefits the wealthy and it will produce a massive economic boom, where government revenues will exceed all expectation and the sovereign date will be reduced to below 50% of GDP .... Thank you trickle down economics!

Obviously all those current mortgages have to pushed thru the snake , the flow weighted towards one year, and then the snake needs to be fed to grow , the stock, but there still appears room for at least the average interest rate across all mortgages to fall lower. Obviously its dependent on the trajectory of the (very quiet) RBNZ , but given certain funding remains in place, I don't see the bottom yet.

I wonder if RBNZ is adrenalin seeking enough to play with the detonator switch.

If it blows up, they would immediately fail all mandates given to them. If it they don't play, they just risk not meeting 1 mandate newly assigned. The odds are clear, they can place their bets however they like.

It would be wise to just sit back and let the market runs it's course.