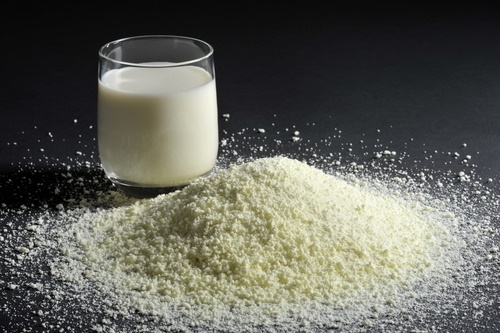 ASB economists, who led the market in picking the big upturn in global dairy prices in the second half of last year, are now saying there's a downside risk to their pick of a $6.50 per kilogramme of milk solids price for farmers this season.

The prediction of a $6.50 price by ASB senior rural economist Nathan Penny was made only shortly before Christmas, replacing an earlier pick of $6, which had stood for several months and was made at a time when other economists, market observers, and the giant Fonterra Co-operative itself, were suggesting much lower returns.

But having long been 'bulls' on the global dairy market relative to other observers, the ASB economists are now sounding a big note of caution.

This follows the latest GlobalDairyTrade  auction overnight in which average dairy prices as measured by the GDT Index shuffled up 0.6%, but the key Whole Milk Powder prices slipped on average by 0.1% to US$3,283. Longer dated delivery contracts fell by a little more than that.

ASB's Penny said that production flexibility is a good thing, and when used well, production can be switched to higher-priced products from lower-priced ones. On this basis, the milk price can be maximised.

"In particular, Fonterra must tread lightly when it comes to whole milk powder (WMP) – because it has pricing power.

"In our view, recent moves to take advantage of higher WMP prices have come at a cost.

"The extra WMP offered has depressed the price significantly compared to what we anticipated it would be.

"And despite a higher weighting for higher-priced WMP, the overall result is likely to be a lower overall milk price."

"At the previous auction, WMP dropped 7.7%, although a lack of buyers hinted that the fall could have been put down to a 'holiday effect'.

"However, at the auction overnight buyers returned, but prices stayed low. As a result, we put the recent weakness down to another factor, recent increases in WMP offer volumes. For example, the WMP volumes on offer overnight were 17% higher than forecast as at the start of December. Moreover, with prices now settling at around US$3,300, we suspect that the increase in offer volumes has been counterproductive overall.

"While it makes sense to make advantage of production flexibility and, in this case, switch to more profitable WMP, this switch has slammed the brakes on WMP prices.

"Moreover, in a previous note and prior to the change in volumes, we anticipated that WMP were on their way to US$4,000/MT." 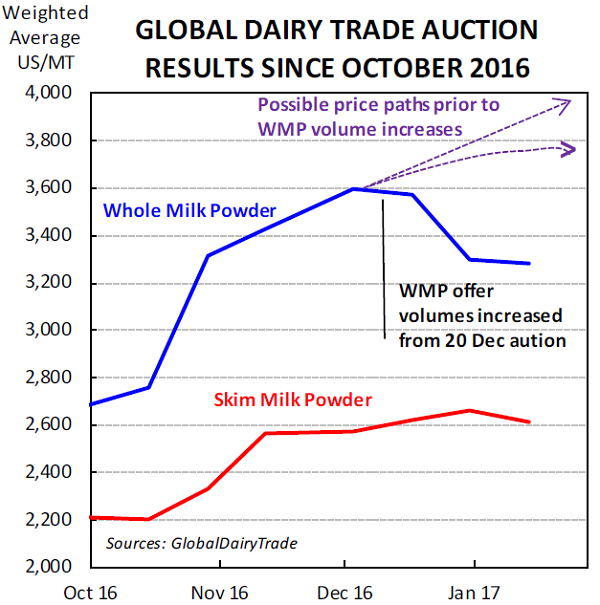 Penny said the implications of the latest developments and weaker auction results were "some downside risk" to ASB's 2016/17 milk price forecast.

Fonterra initially forecast a milk price for farmers this season of just $4.25, but has been increasing this as prices globally have rallied. The last increase - to the current $6 - was made on November 18.

Among the bank economists Westpac have been forecasting a $6.20 price, ANZ economists have  a current expected milk price this season of $6.25,  BNZ economists recently raised their forecast to $6.40, while ASB economists who had stood alone in forecasting a $6 price much earlier in the season when the average consensus was for a much lower price, lifted their pick shortly before Christmas to their current $6.50 price.

How about an OPEC equivalent for Dairy.

So if fonterra didnt incease wmp volumes, what do ASB suggest they do with the milk? Produce more cheese and supress cheese prices instead? End of the day day fonterra has to sell dairy. It cant landbank to push up prices.

Milk powder demand is solid, but inventories are growing. Europe’s mountain of powder continues to weigh,
both psychologically and monetarily. The European Commission received bids for 26.3 million pounds of the
skim milk powder (SMP) in its Intervention stockpile last week. It rejected all of them because they were “too far
from the prevailing market price and the minimum selling prices set at the previous tender.” The Commission is
trying to move older product without sending the wrong pricing signal to a market that is seeking fresher powder.
Each year, China is allowed to purchase up to 325 million pounds of milk powder from New Zealand at a low
tariff rate. Less than two weeks into the new year, China has reportedly exhausted its low-tariff allotment. This
likely signals a robust appetite from the world’s largest milk powder importer. On the other hand, Chinese
merchants are known for amassing goods and holding them in reserve. End users may have rushed to secure theirshare of the low-tariff product, which could stifle further imports until the hoard is used up