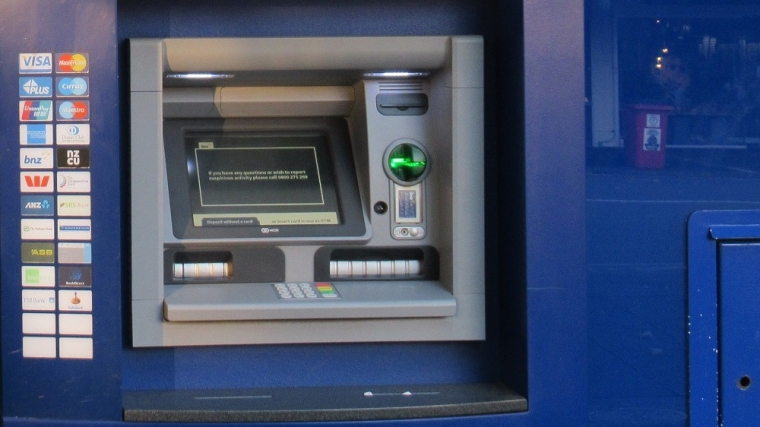 A new report from ratings agency S&P Global Ratings says risks for Asia-Pacific banks "are firmly on the downside" as a result of the pandemic.

In the report, "Top 60 Asia-Pacific Banks: COVID-19 Drives Downside Risks As Credit Losses Jump And Earnings Fall," S&P says it took 50 negative rating actions on lenders in the second quarter of 2020, "and we may yet downgrade more institutions".

"Our ratings on lenders are clearly linked to the region's economic health, and we only see Asia-Pacific GDP trends normalizing by 2023, at the earliest."

The agency says the Asia-Pacific region will lose US$2.7 trillion of economic output over 2020 and 2021, "hitting the performance of banks in the region".

"The main risks are that the pandemic lasts longer and is more severe than we now estimate, and that no vaccine or treatment will be available before the second half of 2021." 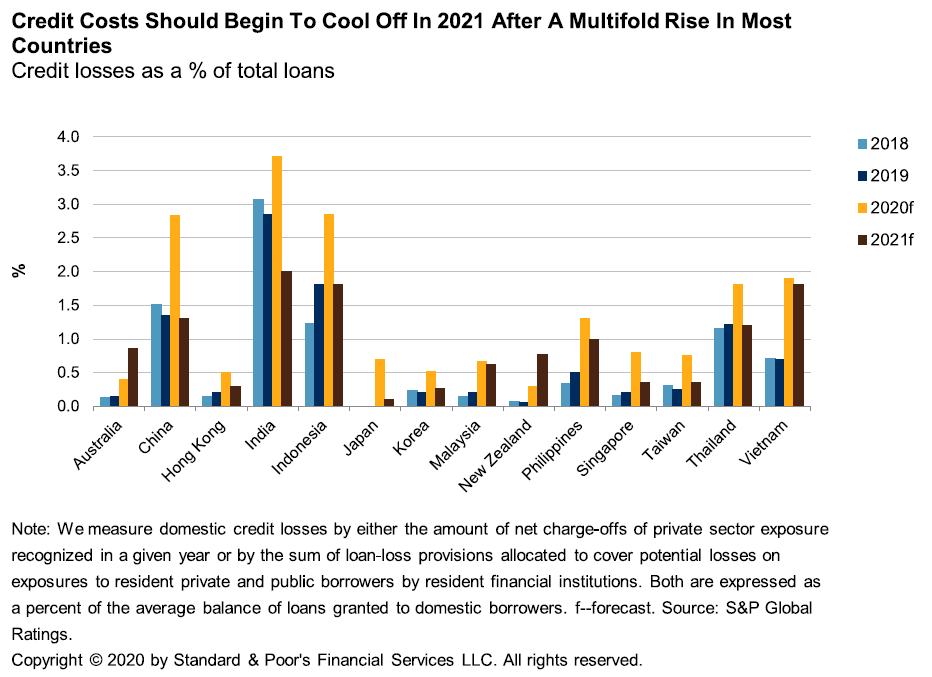 "We expect most institutions in the region will show a multifold rise in credit losses and a sharp drop in earnings in the next two to three years due to the Covid-19 induced economic downturn."

In its base case, S&P expects most banks in Asia-Pacific will absorb the hits from Covid-19, and start to recover by the end of 2021. 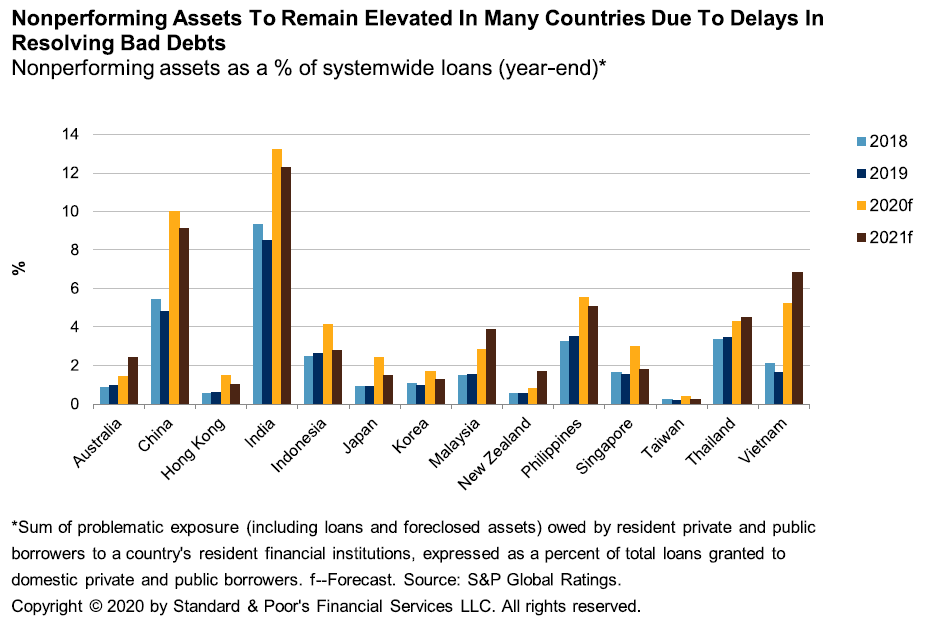 "Nevertheless, a more severe or prolonged hit to the economies than our current baseline would almost certainly push banks' credit losses higher, drive their earnings lower, and amplify other risks. High private sector indebtedness and still high asset prices in many countries may have also set up some countries for a disorderly correction," it says. 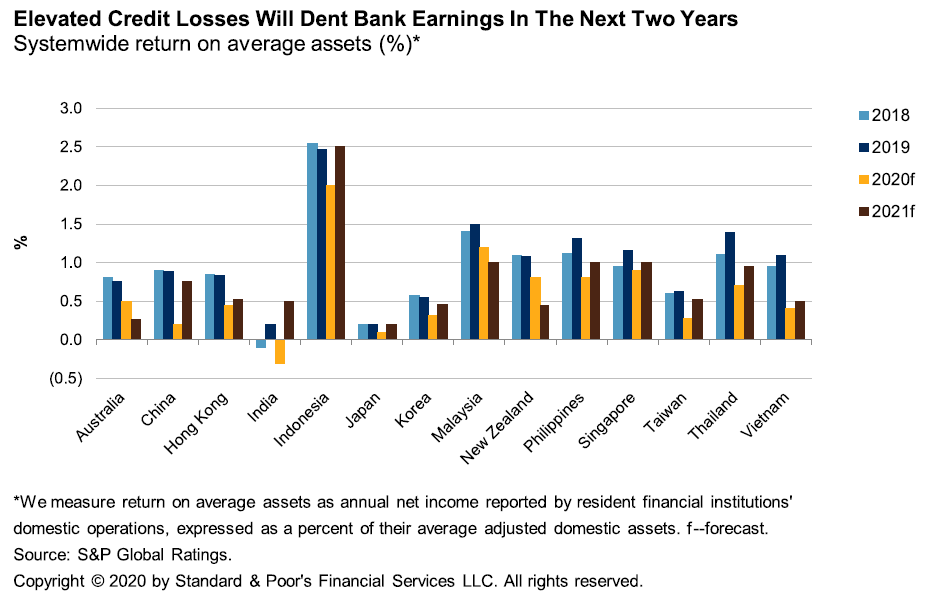 "Consumer and business sentiment is weak in these markets, which are grappling with untypically high unemployment and economic contraction. In our base case, we expect these price declines will not trigger banking system crises as any correction should broadly match the strong price growth seen over the past one to two years. Furthermore, we expect the countries' property markets to trend upward again by late 2021 as their economies recover." 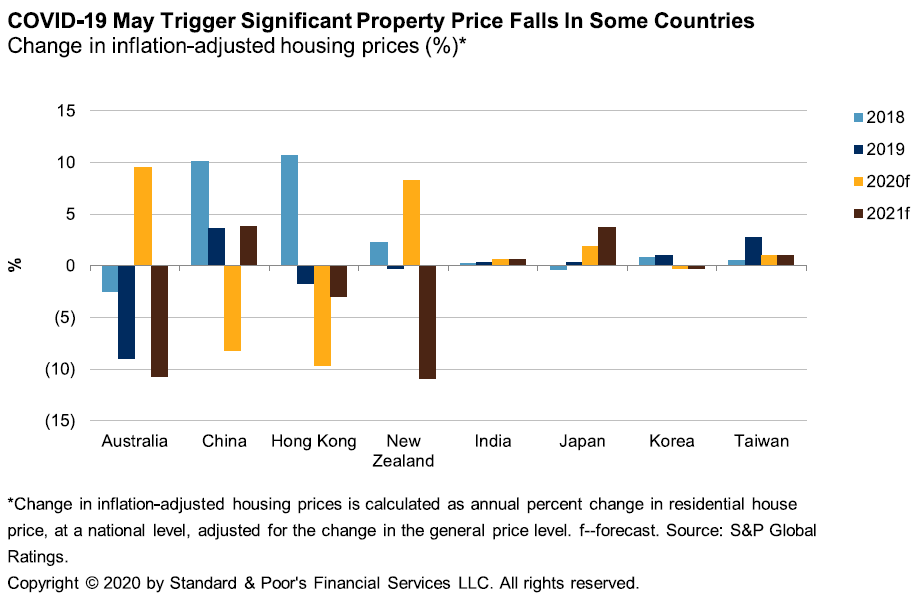 Specifically, S&P is forecasting a rebound in New Zealand's economy around mid-2021.

"Consequently, we expect credit losses will ease to levels consistent with our through the cycle loss expectations of about 50 bps of gross loans in fiscal 2022, from our forecast level of about 80 bps for fiscal 2021."

The S&P report had a small break-out section on each of New Zealand's biggest four banks:

S&P said it expected earnings at New Zealand's largest bank will remain sufficient over the next two years to cover its increased credit losses.

"Similar to peers, ANZ NZ increased its collectively assessed provisions to NZ$189 million for the first half of fiscal 2020 following the onset of Covid-19. This resulted in core earnings falling by about 10% compared with 12 months earlier. In our view, the temporary hiatus on dividend payments and build toward higher regulatory capital standards to meet the Reserve Bank of New Zealand's future capital requirements should bolster ANZ NZ's capital base."

It expected to keep S&P's ratings on ANZ NZ equalized with those on its Australian parent, Australia and New Zealand Banking Group Ltd. (ANZ). Consequently, the negative outlook on ANZ NZ mirrors that on ANZ.

S&P expected ASB's earnings to remain resilient - "albeit at lower levels than in the recent past" - in the face of a sharp rise in credit losses and ongoing lending spread compression over the coming two years.

"Similar to peers, ASB's net interest margin continues to tighten because of structurally lower interest rates. ASB's net interest margin declined to 2.21% in the six months to Dec. 31, 2019, from 2.28% in fiscal 2019. Nevertheless, we consider ASB entered the crisis well capitalised, and we expect the regulator-imposed temporary restriction on dividend payments will support ASB's absolute level of capital in the short term.

"We expect to keep our ratings on ASB equalized with those on its Australian parent, Commonwealth Bank of Australia (CBA). Consequently, the negative outlook on ASB mirrors that on CBA."

BNZ's earnings would remain sufficient to cover significantly increased credit losses over the next two years, in S&P's view, while again the temporary hiatus on dividend payments and the buildup toward higher regulatory capital standards should bolster BNZ's capital base.

"We expect to keep our ratings on BNZ equalized with those on its Australian parent, National Australia Bank Ltd. (NAB). Consequently, the negative outlook on BNZ mirrors that on NAB."

"We expect that WNZL's earnings should remain resilient and sufficient to weather a sharp rise in credit losses because of the Covid-19 outbreak despite the ongoing compression in net interest margin. WNZL's earnings in the six months to March 31, 2020, declined by about 40% compared with the previous six-month period reflecting mainly increased credit loss provisions.

"Nevertheless, we expect that WNZL, like its peers, will likely increase its absolute level of capital in the short term aided by nonpayment of dividends on common equity.

"We expect to keep our ratings on WNZL equalized with those on its Australian parent, Westpac Banking Corp. (WBC). Consequently, the negative outlook on WNZL mirrors that on WBC."

A new report from ratings agency S&P Global Ratings says risks for Asia-Pacific banks "are firmly on the downside" as a result of the pandemic.

Hmmm....as noted in another thread,

The reality is clear.

Banks are thinly capitalised by their shareholders on purpose and the depositors let them get away with it, as do regulators.

Lots of lovely debt and high debt to income ratios, all affordable provided that people do not become unemployed, or want another child, or lose income from wage cuts. No need for interest rates to rise , see.
Do you think we could try people being paid enough and the top 10% not getting more and more of wealth, as an alternative to being sold debt and repossession cycle every 10 years, at which point the rich hoover up the crashed assets?