Roger J Kerr says RBNZ Governor Adrian Orr should now 'fess up, grow some gonads and tell the Government and the interest rate markets where to go!'

Business / opinion
Roger J Kerr says RBNZ Governor Adrian Orr should now 'fess up, grow some gonads and tell the Government and the interest rate markets where to go!' 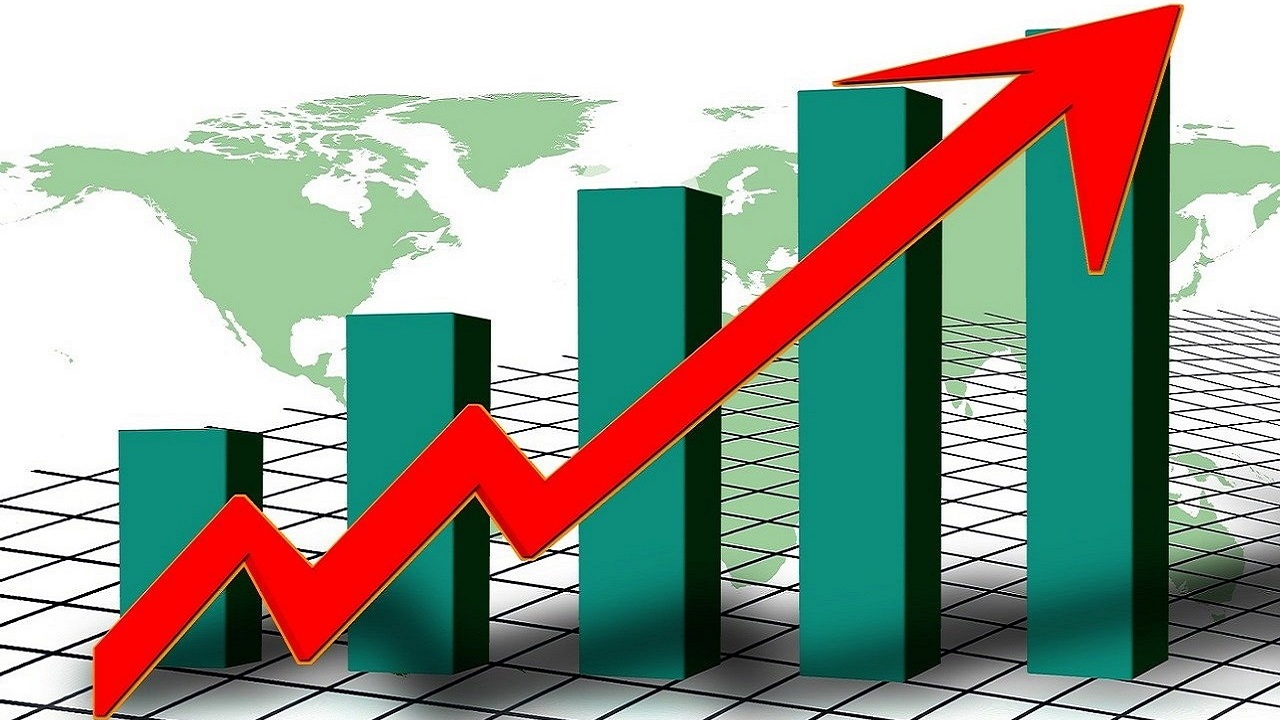 Stronger US data pushes the US dollar to fresh highs

Our currency market view over recent weeks has been that one last bout of US dollar strength in global FX markets on the back of stronger US economic data would pull the NZD/USD rate back from 0.7200 to near 0.7000. Check!

The initial EUR/USD forex market reaction to the Fed’s confirmation of tapering and a better than expected US October jobs number in the week ending 5th November was rather muted and the FX rate remained around $1.1600.

However, yet again a stronger than forecast monthly US CPI inflation increase released last week, spurred concerted USD buying and the USD made smart gains to $1.1430 against the Euro, a level not seen since July 2020. The NZD and AUD both depreciating against the USD in response. The NZD/USD traded to a low of 0.6997 on Friday night, however, has since recovered a tad to 0.7045.

US inflation increased +0.90% in October, well above prior forecasts of +0.50%. With the annual US inflation rate now at +6.20% (core inflation excluding food and energy is +4.60%), the debate is intensifying as to whether the Federal Reserve have already left it too late to rein the inflation back down.

Certainly, consumers in the US are not happy with the massive increases in transport and energy costs they are now having to pay.

The latest University of Michigan Consumer Sentiment survey index falling again this month to 66.8 from 71.7 in October, the lowest recording since November 2011.

Clearly, US consumers are not displaying much faith that the Federal Reserve will be successful in bringing inflation back down anytime soon. The pressure is mounting on the Fed to speed up their withdrawal of the QE stimulus (tapering) and hike their interest rates a lot earlier than the planned end of 2022 timing.

The EUR/USD FX markets are already pricing-in US interest rate increases from mid-2022.

The source of the higher US inflation is largely of the “cost-push” variety with higher oil, gas, commodity and freight prices forcing manufacturers and importers to lift selling prices to end-consumers.

However, there is an element of “demand-pull” inflation as well with consumers feeling wealthier with house prices and equity portfolio values going up, and thus they are demanding products which are generally in short supply. A perfect supply/demand storm for higher inflation.

The risk is that the Fed may be forced to tighten monetary policy earlier and harder as they realise they are behind the 8-ball and that would be negative for the economy and also negative for equity markets.

We remain of the view that the FX markets will fully price-in US interest rate increases 12 months in advance of them actually occurring, therefore the US dollar is today nearing the end of its bull run against the Euro.

Our earlier forecasts were that the USD would appreciate to $1.1500 against the Euro, however that would prove to be a long-term turning point for the USD. We are now at that point, so we will wait to see over coming weeks that the currency markets have fully priced-in all the good US news and from here the USD commences a weakening trend.

The weaker USD forecast may be somewhat delayed by the fourth wave of Covid infection now spreading through Europe, thus weaker European economic data will not help the Euro currency value at this time.

Comparing our inflation to that of Australia, the US and the UK

What is special and unique about the higher inflation here in New Zealand that make us so different to these other economies to justify our starkly different upward trajectory in interest rates?

The answer, from the evidence in the comparative chart below, is “not much!”.

Hopefully, we will get some explanation form the RBNZ on 24th November as to whether they think the rapid increases the market is pricing is justified or not. However, do not hold your breath that the RBNZ will either outrightly endorse or reject the current market pricing. Their outlook style is more obfuscation with multiple future scenarios for the economy that tell you nothing.

Breaking down the annual inflation rates to 30 September 2021 for the four countries into their  component parts (11 expenditure categories) is a useful way to analyse whether New Zealand’s inflation is any different, so as to require a different monetary policy response. 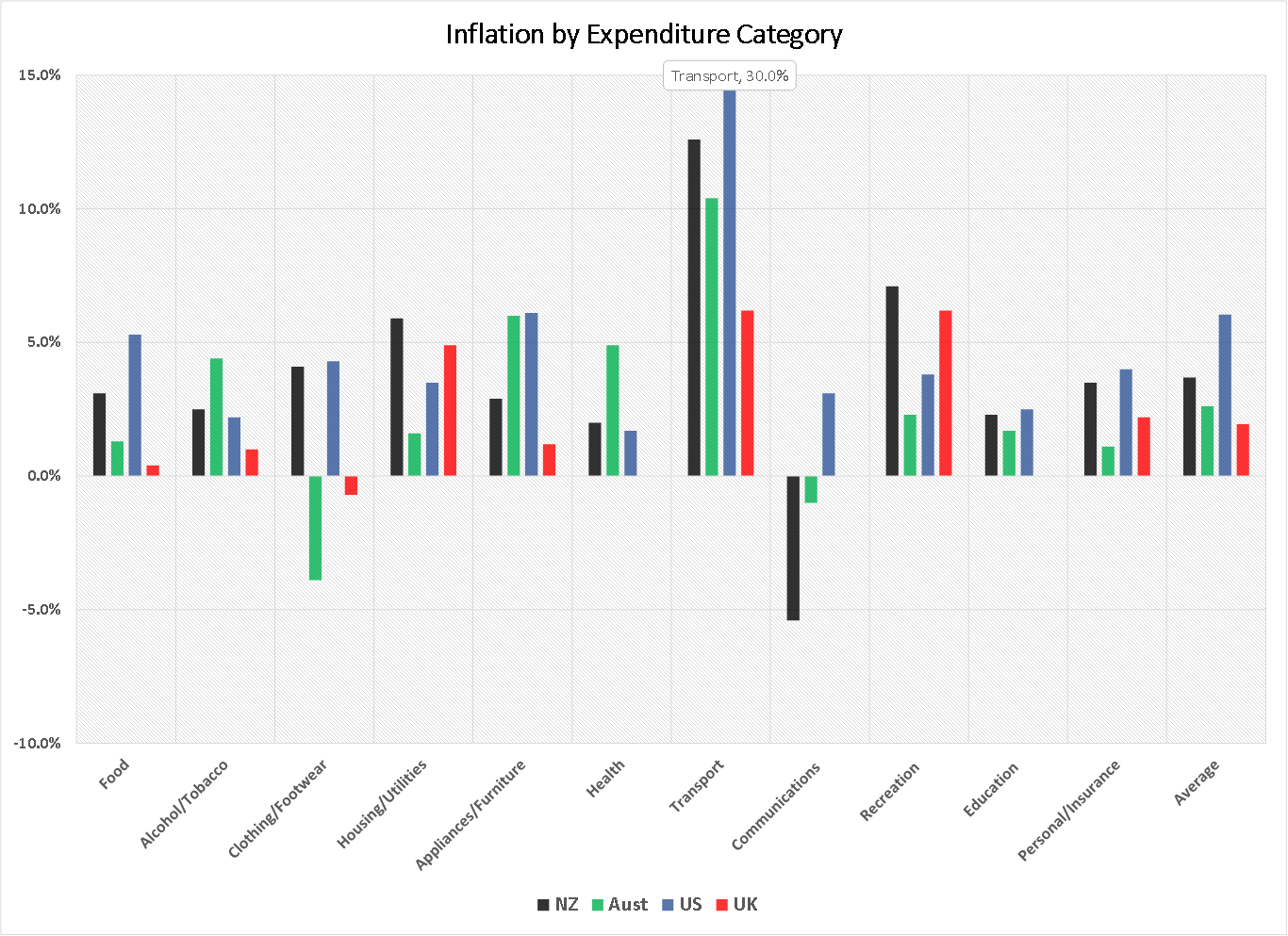 My take-outs from the comparative analysis are as follows:-

The conclusion is that there is no great difference in the supply-side inflation increases that interest rate levels can do nothing about. Therefore the RBNZ should dial-back the market pricing.

Where one significant difference lies for New Zealand is that Finance Minister Grant Robertson has interfered with the RBNZ’s inflation remit and introduced responsibilities for house prices onto the RBNZ.

The Reserve Bank of Australia have stated categorically that house prices are the responsibility of their Government, not them.

Having created much of the over-hyped house prices with super low interest rates, RBNZ Governor Adrian Orr should now fess up, grow some gonads and tell the Government and the interest rate markets where to go!

If he follows that advice, the Kiwi dollar will depreciate on its own for a period after the 24th November Monetary Policy Statement.

"Is our higher inflation any different to that of other countries?"

Does it means, if some other countries are screwing, so do we.

This is exactly what normally RBNZ does, imitate fed with premise that if Fed screws so do we and will get away with failure. Forgetting that each country is different specially USA which is a much Bigger and Diversify economy, even Australia.

What does NZ has in name of economy = Housing and the same is evident when one sees the percentage of bank finance towards housing compare to other businesses and also the support and promotion that housing receives in NZ from government and rbnz, as a percentage compare to other countries.

The RBNZ Governor has shown himself to be compliant with the current government and for him to show any courage in telling Grant Robertson and Jacinda where to go would be out of character for him.

Unemployment & inflation are in RBNZ mandate Unemp was controlled by slashing rates (.75%) but when it comes to increasing it to control inflation we are getting excuses like it's a global issue.

Unemployment is also a global issue Orr shouldn't have cut the rates so fast seems like it's hypocritical and it will only increase prop prices, as there is no business other than prop business in NZ in which evry tom dik n harry is minting money and increasing house unaffordability on which this govt came into mandate.

Hypocrisy is the exact word to describe it.

Roger I take it you do not a believe in the dollar milk shake theory?

...... where he expects a rapidly appreciating US Dollar over the next few years, relative to other world currencies.

... Brent expects a massive devaluation of currencies across the board. Because of the U.S. is a relatively safer, stronger economy, he expects capital to flood into its domestic markets.

Housing building cost is more likely having a high demand issue, which RBNZ monetary policy can be used effectively to deal with. This make our inflation is different from other countries. This is probably why the NZ interest rate markets are today pricing-in the OCR to increase by 2.00% over the next 12 months in my opinion. Don't forget we had a 30% housing price increase for last year.

What is special and unique about the higher inflation here in New Zealand that make us so different to these other economies to justify our starkly different upward trajectory in interest rates?

The answer, from the evidence in the comparative chart below, is “not much!”.

Well said! It is pretty clear that adjustments to interest rates will make sod all difference to the price of things - they will just increase housing costs and slow house price growth down (a bit). So, we will end up with people spending less in the real economy at the same time as Govt cuts its fiscal stimulus - a recipe for demand collapse and increased unemployment. Monetary policy is so dumb.

So Roger, I will ask a very simple question. How many investment properties did you gorge on in the last 15 years? Are you yet another person active in the media that has actively ramped the property market while back slapping politicians for the last while. Now in fear that the non-productive and society destroying gravy bowl may be taken away.

And how many did you get Jim?

Haven't heard such ridiculous explainations from a "economic" expert in ages.

Roger, perhaps you can try your luck in anti-vax circles.

Their followers don't give a damn about science and rational reasoning and perhaps interest.co.nz can look for more competent contributors?

Orr grow some 'nads? On another planet. He is right up Robertsons pocket. So he won't be doing anything unless he's told. RBA think he is weak and lightweight. And they are right. Sorry, that's "in Robertsons pocket".

So the main driver is transportation.