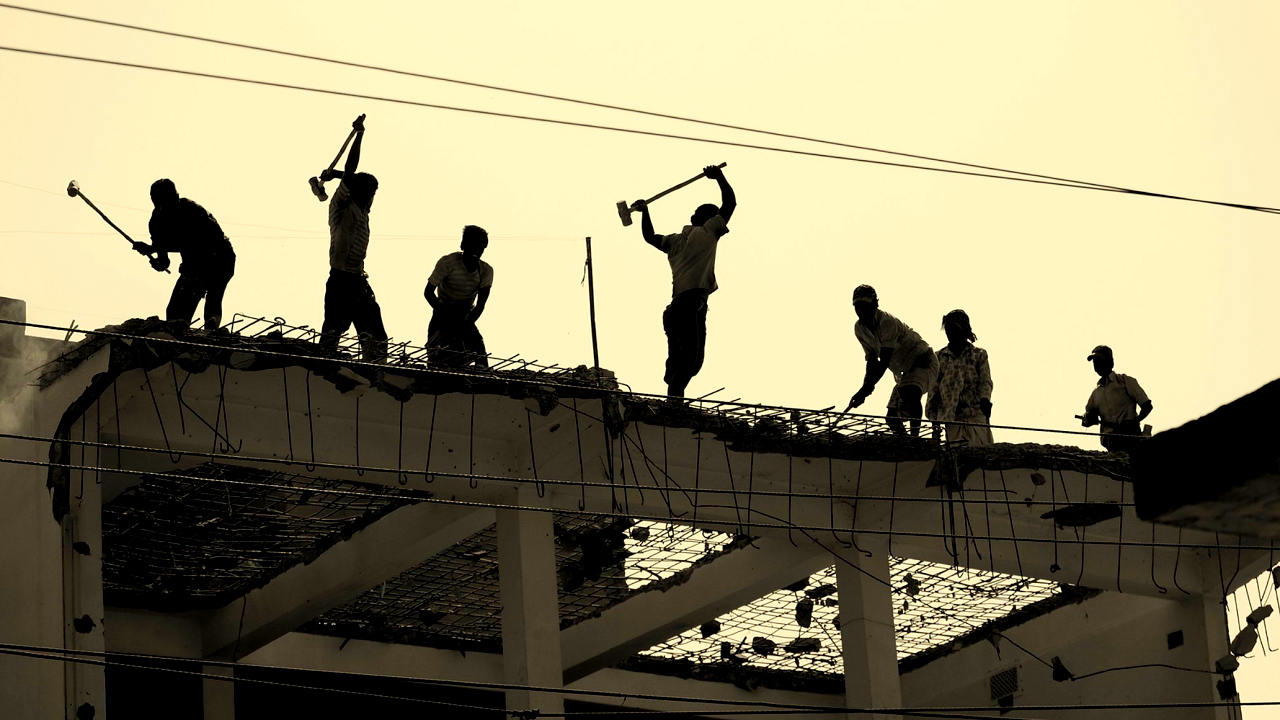 The economy shrank by -3.7% in the September quarter as particularly Auckland languished under the impact of a Covid Delta lockdown, according to figures out on Thursday from Statistics New Zealand.

But while that's the second largest drop ever in a quarter (after the lockdown-impacted -10.3% June 2020 quarter), the figure is actually very much in line with recent forecasts from economists.

The performance of the economy in the latest quarter was adversely affected of course by the Auckland lockdown that extended through the latter half of the period. But the results still showed a degree of resilience and demonstrated that businesses have become more adept at handling the major lockdown disruptions.

Economists had earlier been expecting a fall of -7% to -8% but had revised their picks upwards in recent days as it had become clear the outcome would be better than earlier anticipated. In its November Monetary Policy Statement the Reserve Bank had picked a -7% figure for the September quarter.

The latest GDP figures announced on Thursday follow on from a strong rise in the June quarter - although that figure has now been revised down by Stats NZ to +2.4% from the earlier announced +2.8%. There were a number of other revisions made to earlier GDP figures by Stats NZ as well.

ASB senior economist Jane Turner said that after incorporating the various revisions to past figures, the September quarter GDP was "just" 0.3% below the same quarter of the previous year – "a phenomenal result given the impact of the Alert Level 4 lockdown over the second half of Q3".

"The result reflects the underlying momentum heading into the lockdown and the resilience of the NZ economy," she said.

"Going forward, the key question is how quickly the economy bounces back to pre-Delta levels – we expect this to take place over the first half of 2022.  A key determinant will be how household spending growth holds up over 2022 in the face of a number of headwinds including the higher cost of living, higher interest rates and some uncertainty as NZ adjusts to living with COVID-19.  We expect the RBNZ will continue to lift the OCR [Official Cash Rate] over 2022, to a peak of 2%."

Stats NZ said some industries were more affected than others by the higher alert level restrictions during the September 2021 quarter.

“The four industries with the largest falls in activity were retail, accommodation, and restaurants; manufacturing; construction; and arts and recreation as they were the most affected by lockdown measures. Face-to-face activities were unable to take place, physical workplaces were closed, and non-essential workers remained at home during alert levels 3 and 4,” Stats NZ's national accounts industry and production senior manager Ruvani Ratnayake said.

The falls in production were mirrored by corresponding falls in household consumption expenditure and investment expenditure, which fell by 7.5% and 5.3% respectively.

ANZ senior economist Miles Workman said the lesson learned over the past 18 months or so is that government support via the wage subsidy and other business support is an extremely effective, "albeit costly", way to limit the broader economic fallout.

"We’re hopeful that things will pick up largely where they left off ahead of lockdown, but we are cognisant of the fact that underlying economic conditions are very different to the last time we were asked to stay home and save lives. This time: The housing market isn’t poised to unleash a tsunami of equity upon those lucky enough to not be locked out of the market. In fact, house prices now appear poised to fall.

"One thing’s for sure, whatever comes next won’t be a rinse and repeat of the past year or so. Hopefully, the strong labour market and gradually reopening border puts the economy on a sustainable growth path, but forecast uncertainty remains very high," Workman said.

Below is a graph showing the percentage movements in GDP in all industries and comparing this with the lockdown affected June 2020 quarter. 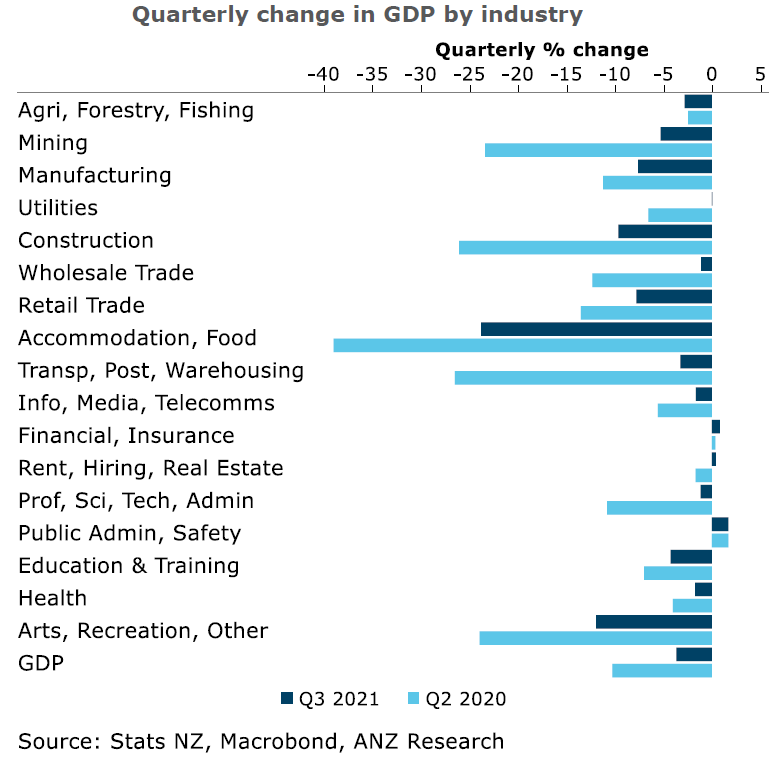 The confidence that doing more of 'what worked in the past will work once again' slips very easily into magical thinking.

Humanity was smart enough to exploit the natural riches of hydrocarbons, but not smart enough to figure out what to do after we've consumed all the easy-to-extract wealth or how to deal with the consequences of the profligate use of all the riches.

The same can be said of the immense financial wealth that's been generated in the past 20 years. We were smart enough to generate all these hundreds of trillions of dollars of "wealth" but we aren't smart enough to manage the consequences of our profligate use of the magic of money-creation.

Nah, I don't think so. The lockdown we had lasts around 4 months. -3.7% is not bad at all for that length of time. The next GDP data will be something worth to look at.

no $ from international students and visitors.

Or  this one ,New Zealand always seems to leave out some debt  https://stats.bis.org/statx/srs/table/f3.1 ( although Ireland appears to be now functioning reasonably well after breaching 100 percent in 2008 and soon after collapsing  ) or even better imaginary  paper wealth https://www.rbnz.govt.nz/statistics/m10, with another 100 billion being added this afternoon, try selling 1.7 trillion in housing all at once, particularly if you cannot.

The real GDP contribution from residential construction is derisory, given the capital valuations driven by disproportionate amounts of bank lending to the housing sector - source

So the economy shrank by 3.7% in the sept quarter ....all while the Gov pumped in at least 2% of annual GDP.

"To date, the Government has paid about $4.8 billion in support since this Delta outbreak began in August. That amount exceeds the new operating spending the Government would have for a whole year for the whole country in most Budgets."

Nothing to see here. Everything is remarkably resilient. Have you taken out a big mortgage yet? No? Best go get busy then!

We've seen such a massive level of welfare spent to keep house prices up during this pandemic. Such a coddled industry.

“government support via the wage subsidy and other business support is an extremely effective, "albeit costly", way to limit the broader economic fallout.”

It is easy to spend borrowed money & appear rich but the proof will be in the pudding over the next few years of the quality & effectiveness of the spend.

Will it grow the economy sufficiently to repay NZ’s increasing debt?

The huge increased spending planned by this government for 2022 is likely to significantly increase inflation. This is why Treasury is forecasting over 10% increase in house prices for 2022.

NZ needs someone to run the country that has experience in reducing excessive debt not just keep increasing it. Clearly the government does not have such a person.

Include Councils in this as well.

The govt gets to borrow at interest only, with some pretty good rates.  I see no downside here.

NZ always runs up debt in crises, though. John Key and the Nats did post Chch earthquake. It would have been more surprising to see no debt run up.

Austerity the answer now though? That would be interesting...

That’s not optimal timing for additional fiscal stimulus, but Budget 2022 is set to deliver that anyway.

The fiscal stimulus in 2022 is a damp squib - Govt is planning to tax as much out of the economy in the coming years as it spends, and investment in restructuring the health system will only stimulate the offshored profits of the big consultancy firms.

Nice photo. India maybe? Who bashes the last bit of concrete beam out?

So basically what is keeping the country afloat are,

Try jawboning the real estate and see how it flows through finance and public service and eventually bring the whole country down.

The best thing to do now is a hands off approach and be prepared to reverse policy course.

Isn't there still upward valuation and and we need to be quick?