None of Australasia's big four banks, even when their New Zealand subsidiaries are included, needs to raise more than A$12 billion (NZ$15.7 billion) from overseas wholesale money markets during their 2012 financial years, Deutsche Bank analysts say, which should be manageable given their strong credit ratings.

In Australia the big banks recently used the rising cost of offshore wholesale money, against the backdrop of the European sovereign debt crisis, as an excuse for dragging their heels in passing on to customers a 25 basis points cut to the cash rate by the Reserve Bank of Australia. And in New Zealand BNZ CEO Andrew Thorburn told interest.co.nz in October that even if the Official Cash Rate stays at its record low of 2.5% for an extended period, banks floating mortgage rates may rise because banks funding costs are increasing.

However, the Deutsche Bank analysts say their analysis shows the big four banks have the capacity to cover much of their funding needs by issuing domestic debt, short-term debt and raising deposit money, - all of which is cheaper than raising long-term overseas funding, and doesn't cost any more than it did six months ago.

"We believe that the A$17 billion to A$27 billion (2012 funding requirement) task per bank will be comfortably achieved even if overseas markets remain challenging with 1) domestic term debt issuances, 2) excess deposit generation, and 3) short-term deposits and covered bonds/residential mortgage backed securities well positioned to cover the gap," the analysts say.

"Our analysis suggests that in total Australian banks will only need A$12 billion maximum from overseas markets which appears manageable given Australian banks strong relative credit rating."

Even though the big four banks recently had their credit ratings  downgraded to AA- from AA by Standard & Poor's, they remain comparatively high compared with most international banks.

(Growth in AIEA (total lending) in the chart above refers to estimated loan growth).

Freeman, Wang and Triggs estimate, based on current market conditions, that margins at the big four banking groups will drop by between only two and six basis points during the 2012 financial year. The big four racked up combined record annual profit of A$25 billion this year with their New Zealand subsidiaries delivering combined profit of NZ$2.778 billion, which is NZ$78 million, or 3%, higher than their combined profit in the boom year of 2007.

Although acknowledging the volatility in offshore wholesale funding markets is concerning, where they estimate spreads on term debt have risen about 100 basis points over the past six months, the Deutsche Bank analysts say the big banks' wholesale funding needs are relatively small due to weak asset - including lending - growth, refinancing requirements that aren't onerous and strong deposit growth. On top of that, they note borrowing costs for the banks have actually fallen marginally in some funding markets such as US commercial paper and domestic deposits, and are up just 30 basis points in domestic bond markets.

In the US commercial paper market, for example, they say banks can issue short dated bills at 20 to 30 basis points below the US dollar LIBOR.

The big banks are also strongly placed in terms of their holdings of liquid assets, with the likes of cash and Treasury bills, bank bills and residential mortgage backed securities. The idea is that these, significant buffers over current requirements, can be run down at times of stress. 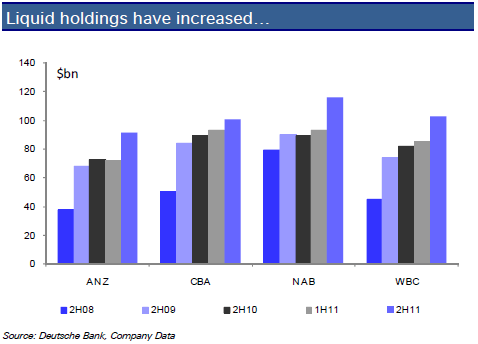 Where the money may come from

Freeman, Wang and Triggs say they expect the banks to meet their funding requirements through raising A$8 billion to A$10 billion worth of senior, unsecured term debt, around A$5 billion of privately placed term debt (CBA issued A$17 billion of private placement debt in 2010 and A$7 billion in 2011), a "conservative" estimate of A$3 billion raised through covered bond issues (ANZ is targeting A$5 billion), and A$2 billion each through residential mortgage backed securities issues.

"This leaves a relatively manageable A$1 billion to A$9 billion in benchmark term debt issuance requirement. Under these assumptions, ANZ's would effectively require no benchmark issuance, while NAB would require the most at A$9 billion."

The analysts suggest ANZ is best placed to deal with wholesale funding challenges given it has the lowest refinancing needs during the 2012 financial year at A$17.1 billion, and can tap Asian deposits, from where it has transferred A$13 billion worth of deposits to Australia to help fund the group balance sheet over the past three years.

"Should external markets prove to be unobtainable, we believe that ANZ can open the pipe from Asia once again to ease the burden."

In contrast they say NAB, requiring A$26.6 billion, is most at risk from wholesale funding challenges. With its strong asset growth - in New Zealand BNZ delivered the strongest September quarter asset growth at NZ$4.6 billion - and the greatest exposure to European and British wholesale funding where its subsidiary Clydesdale Bank was recently downgraded to BBB+ from A+ by S&P, and its deposit growth not keeping pace with its lending growth. 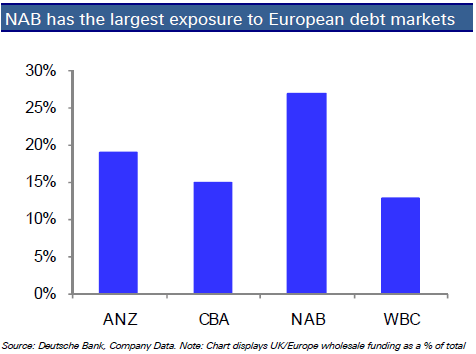 Meanwhile, the analysts say CBA and Westpac are well placed to meet their respective A$22.7 billion and A$21.3 billion funding requirements due to strong deposit bases, improvement in term deposit spreads, low asset growth, and strong access to domestic funding. Their margins are, however, predicted to decline by about 3 basis points.

The financial sector has taken hostage an entire nation.

Who can we trust Deutsche Bank, UBS, Westpac, ANZ - our government ???

Did The Fed Quietly Bail Out A Bank On Tuesday?

Over the past month we have been closely documenting a major funding squeeze in the all important shadow economy - the "synthetic liquidity" conduit which far more than traditional sources of cash, has become all important for proper bank functioning over the past decade.