How clean are our banks' mortgage books? We have been contacted with local stories about the same issues bedevilling Aussie banks

How clean are our banks' mortgage books? We have been contacted with local stories about the same issues bedevilling Aussie banks 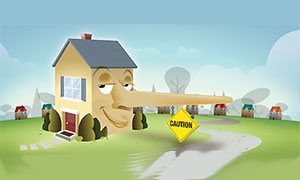 Insider sources are telling us that this week, two of our Aussie owned banks are likely to announce major changes to what they will accept from borrowers as 'income' to support home loan applications.

These banks will be significantly tightening their view on what overseas income is acceptable as income support for these loans.

This is the latest move by banks that are becoming increasingly worried about mortgage application fraud, especially from borrowers who are recent immigrants.

This issue first surfaced in Australia. Media reports there noted that both ANZ and Westpac have moved to clamp down on burgeoning mortgage application fraud.

In fact, it is likely worse than that. The Australian flows have indicated that mortgages are being used to launder money from China into the country.

The problem for the banks is that they face little credit risk in these flows.

Borrowers have learned how to apply for and get loans. That establishes a benchmark credit line. The borrower then pays down most of the loan over a relatively short period (say less than 2 years), but keeps the credit line active by owing a small residual that is due over the life of the original loan. The bank's loan-to-value (LVR) exposure is negligible. The whole process is then not in focus for the original fraud.

This scenario has undoubtedly been happening in New Zealand too.

Our sources indicate that new borrowers are being coached into how to prepare documentation that satisfies bank box-ticking criteria. Coaching is apparently being done by some aggressive mortgage brokers, and also by some bank employee "mobile mortgage managers". There is a significant honey-pot of transaction commissions at stake in the way banks remunerate both the broker and "mobile manager" channels.

Coaching involves how to construct documentation and bank account 'transactions' that will then appear to meet the loan application standards.

The banks know full well that this is and has been going on, which is why the new clampdown is about to take place.

Early last month interest.co.nz asked ANZ CEO David Hisco about foreign property buyers. Hisco said: "We made changes last year around our controls on income verification which is really the issue in Australia. There have been people who have stated an income that has been difficult to verify or in fact has been incorrect."

"It's actually not that easy to be an overseas buyer and get a loan from a bank in NZ today, or from our bank anyway."

ANZ's CEO may be right, but only if you use honest statements and documents when applying for a loan.

Apparently it is going to get even harder thanks to these moves by ANZ.

Some brokers have been warning their clients about these impending changes, trying to avoid being drawn into deals with questionable income sources.

Another major bank has closed its migrant banking section. They don't say it is related to mortgage application fraud issues (they say it just reflects mainstreaming because of the change in Auckland's population make-up), but it would not surprise us if that was a significant factor in the closure decision.

Because financial sector stability is not actually threatened by any of this, the Reserve Bank as the banking system regulator likely has only a passing interest. But when AML issues are involved, the Reserve Bank has shown intense interest and takes action. However it needs evidence.

The banks themselves are the front line and they have the responsibility to challenge fraud when they find it and take the evidence to authorities, in this case the Police.

But for transactions already completed, our sources indicate that the banks don't really want to know and have devoted few efforts to uncover and unwind those older deals. All effort is going in to making sure new questionable transactions are not going through.

The level of transactions are significant. At one stage we were told that up to 40% of all Auckland mortgage transactions involved members of the Chinese community. That may not still be the case (it may have never been the case), and we have no way of verifying it either now or in the past. But one test we did run was to inspect the Statistics NZ income by ethnic group database. "Asian" people in the 24-65 age group earned only 86.7% of the national "average weekly earnings" in 2015. That shows that local earnings cannot be supporting aggressive house buying; overseas 'income' has been essential in this process.

The problem with this problem is that there are no direct victims. The house sellers are happy to get higher prices. The house buyers have converted their offshore funds into a local asset. And the banks, their mobile mortgage managers and/or mortgage brokers have completed their quota of income-earning transactions with the bank quickly in a low or no-risk LVR situation. There are only indirect victims.

(Interestingly, perhaps one indirect victim is the banks themselves. They competed hard for this business, sometimes paying cash-back incentives, almost always paying broker commissions and employee bonuses. That was in the expectation of a long-term mortgage repayment flow earning plenty of interest. If the borrower suddenly repays very early, the profitability to the bank of these transactions is completely undermined.)

But anti-money laundering laws have almost certainly been flouted.

Our in-bank sources won't supply us 'evidence'. That would involve breaking their responsibilities to their employers. It would not be career enhancing. But they are worried about the situation and how it may play out when things are exposed and unwound.

We have put a number of questions to the five major mortgage lenders and all have responded; some were general, some noted each point. These questions were:

1) Have you seen an increase in mortgage fraud, or attempted mortgage fraud, from immigrants and offshore domiciled buyers in recent years?
2) If the answer to 1 is yes, what sort of behaviour has this entailed, and how are you striving to counter it?
3) Have there been particular concerns about income claims in mortgage applications, and if so how can you address these?
4) Have you done any work in this area with mortgage brokers and/or mobile mortgage managers in terms of how they assist customers with their mortgage applications?
5) Are you planning any changes to what your bank will accept from borrowers as income to support home loan applications? If so, what are the changes?
6) Have you, or are you, tightening the bank's views on what overseas income is acceptable as support for a loan? If so, how?
7) Do you look back at approved mortgages that may have been granted prior to tightened standards to assess whether you have any exposure from them to AML or fraud issues?

There seems little point in listing all responses, so we have selected two as examples:

In response to your questions below, as part of being a responsible lender, we actively monitor for fraud across our entire business and are vigilant across the board. While it wouldn’t be appropriate to go into the details of specific controls and checks in place across our channels, we are always adapting these to reflect changing market behaviours as well as regulatory requirements.

We continue to monitor previously approved mortgage for signs of fraudulent activity, and to ensure performance remains in line with our risk appetite.  BNZ has a robust process for accrediting mortgage brokers, who are subject to the same training, processes and controls as all other BNZ staff.

We are now seeking reader help in tracking down concrete evidence. If specific enough, we will ensure the appropriate authorities receive the details.

Comments are not open on this story because we do not want the usual suspects using this issue as cover to beat their anti-immigrant drum.

But we are seeking evidence, clues, or trails by email. Send them to me at david.chaston@interest.co.nz. We would like to talk to you, but if you are not willing to do that we would still like to hear from you by email. What we need is specific documentary evidence of mortgage application fraud.

To maintain the integrity of our financial system, fraudulent transactions from any source need to be unwound.