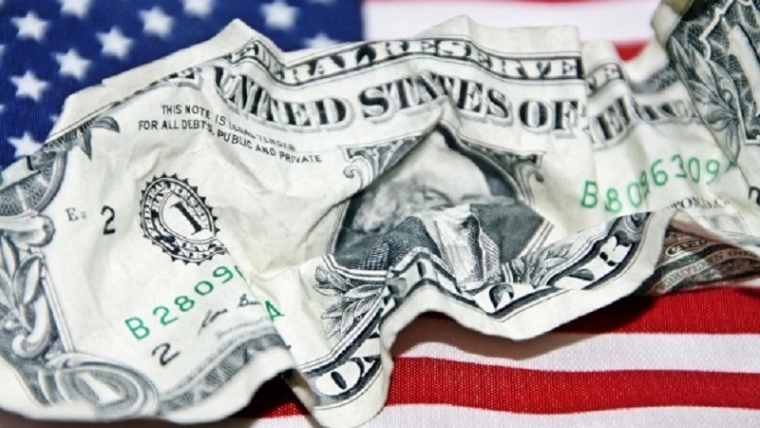 The New Zealand dollar has already given back most of its gains of last week when a spectacular local employment figures propelled the NZD/USD rate up to 0.7085, its highest level since mid-June.

The strong jobs numbers for the June quarter, following higher GDP growth and inflation outcomes over recent weeks, was certainly positive news for the Kiwi dollar. It built in a total certainty (in the financial markets’ eyes) that the RBNZ will be the first central bank in the world on 18th August to increase interest rates in the post-Covid era.

The NZD/USD has yet again retraced lower to 0.7010 due to a stronger US dollar in global currency markets.

The stronger pathway for the US dollar that this column has consistently expected through the middle of 2021 is now back on track following the disappointment of the lower than forecast +6.5% GDP growth result for the June quarter.

The massive return of workers in the leisure and accommodation sectors in the US economy was no great surprise as high Covid vaccination rates (in most states) allows the US economy to return to some form of normalcy.

The job numbers provides more ammunition to the case that the US Federal Reserve will very soon have to signal a progressive tapering back of their bond buying (money printing) programme as the economy is expanding on its own and no longer needs that monetary stimulus.

Watch for the US dollar to post further gains to $1.1600 against the Euro over the next few weeks as the FX markets anticipate a clear message from Fed Chief Jerome Powell at the Jackson Hole central banker’s symposium in late August that the US can now start unwinding their extraordinary monetary stimulus. In the absence of any further positive factors for the NZ dollar in its own right over coming weeks, a push to $1.1600 in the EUR/USD rate would pull the NZD/USD down to 0.6900.

The local interest rate market has priced-in successive OCR increases over coming months and thus the Kiwi dollar has strengthened on its own accord due to the widely anticipated decision by the RBNZ on 18th August to increase the OCR.

As a result, at 0.7010, the NZD/USD exchange rate is one cent higher than where it would otherwise be trading on offshore USD and AUD movements.

The 0.25% OCR increase is therefore already fully priced into the NZ dollar exchange rate at 0.7010, further gains will only be minor when the RBNZ deliver to the expectation.

What will be more important to the future direction of the Kiwi dollar will be the commentary from the RBNZ on how they see the NZ economy tracking over the next six to 12 months.

All the bank economists see the NZ economy as currently overheating on strong increases in consumer spending, house prices and jobs. They are demanding immediate and substantial interest rate increases from the RBNZ so that the inflation is brought under control.

However, the banks are taking a very short-term view of New Zealand’s economic position. They are also not considering the significant risks in respect to the rapid spread of the delta Covid variant that is currently severely impacting the Australian economy.

A medium to longer term perspective on the NZ economy would incorporate the following counter-balancing arguments: -

So, even though the RBNZ will probably go through with their 0.25% OCR increase on 18th August, their economic outlook should be much more clouded and uncertain than the financial markets currently expect. The implications for the value of the NZ dollar are therefore perhaps not as positive as an interest rate hike would typically suggest.

Looking back (in convenient hindsight!) over the last 12 months it has become clear that Adrian and Grant have both overcooked the economic stimulus and now face tough decisions to rein it back in.

The RBNZ have commenced that process and it is important that they do it in a measured way that does not send the economy spiralling the other way.

There is far less confidence that Finance Minister, Grant Robertson will pullback on his fiscal largesse anytime soon. The Covid economic emergency last year allowed the Labour government to enhance its political populism by splashing cash into the economy.

What is all too often forgotten is that the money is all borrowed and therefore the government must have a plan to grow the economy to generate the tax revenue to repay the debt.

There is no sign that this Government has any such plan.

In the end, offshore investors and agencies will observe that New Zealand’s current economic performance is too reliant on debt, we are too slow to vaccinate, and this “fool’s paradise” syndrome will ultimately bite us in the bum.

The conclusion for the exchange rate outlook is that the NZ dollar is unlikely to appreciate on its own bat, a higher NZD/USD rate next year will be entirely due to a weaker US dollar against all currencies. 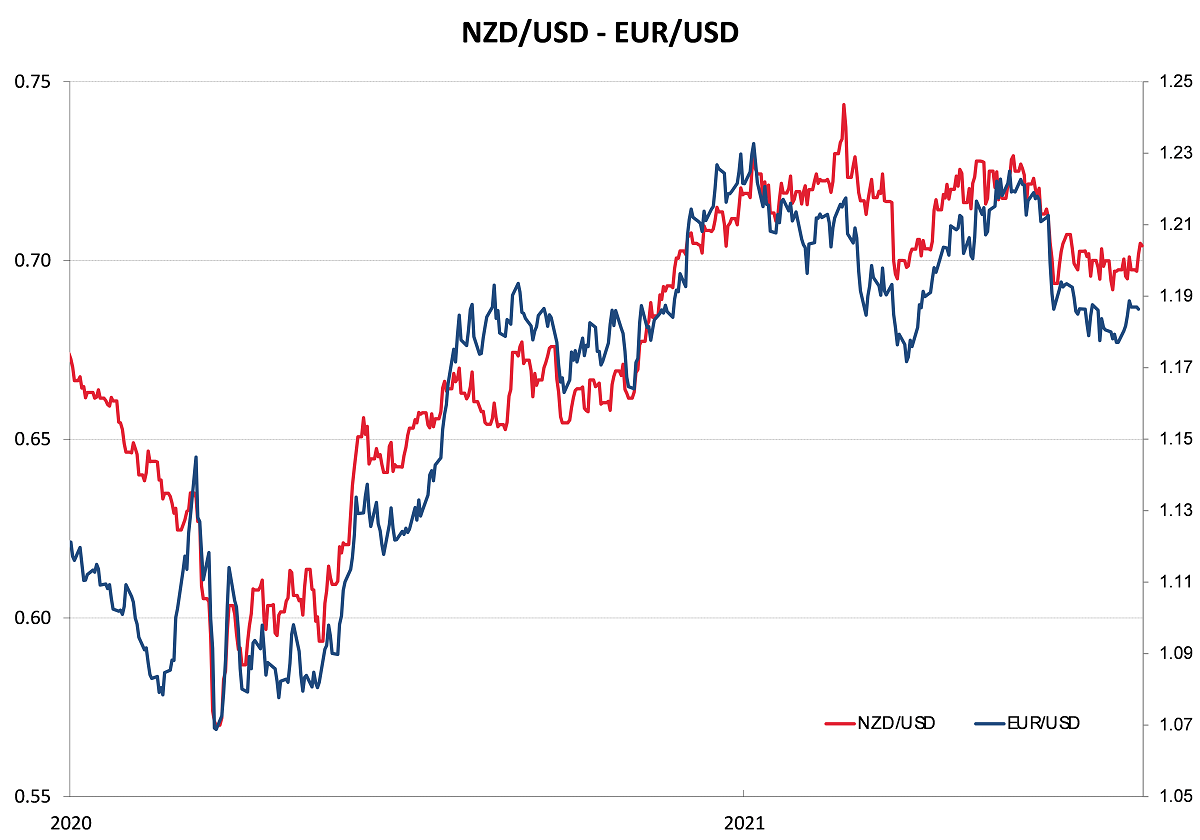 The current government appears to be economically illiterate. The long-term consequences of their policies, especially if Labour is re-elected and governs with required support from the Greens, will result in NZ achieving third-world status. Despite continued deficit spending by the U.S., the NZ dollar will go down to .50 U.S. as a result of the undermining of our productive sector by government regulation.

Strongly support the need to take the bank economists advice with a pinch of salt - their baying for a hike in interest rates that will make their shareholders a stack of cash is getting tiresome.

But, the idea that the Govt 'debt' is going to "bite us in the bum" is just plain wrong. The days when sovereign governments were held to ransom by bond vigilantes are well behind us. The constraint to the level of Govt 'debt' is the risk of profligate Govt spending triggering inflation. This view is quickly becoming mainstream. We need to budget in terms of our real resources - not some arbitrary count of how many dollars Govt has spent into the economy that it hasn't taxed back yet.

Roger is right. Raising OCR is unlikely to have a meaningful impact on inflation- it's a supply issue, not demand.

However, raising OCR impacts businesses and that results in weaker economic output.

All this suggest a stagflation is in the making through OCR increments.

Raising the OCR in NZ just takes money out of the pockets of mortgagees and puts it into the pockets of savers - with the banks taking a cut on the way. So we'll see some minor reductions in consumer spending as mortgagees adjust to higher rates, which will hit some businesses, and a *bit* of friction on house price increases. I agree with you though - the idea that an OCR increase is required to tackle inflation is really stupid - unless Govt is planning to put the minimum wage up to $30.

Inflation or stagflation.....RBNZ is tying themselves in knots and the more they try to help, more screwed....they may have helped in short term (who would not by printing and throwing money) but keeping continuing is .....even antibiotics are good but overdose leads to more harm.

Mr Orr is a doctor who went and is going overboard therby doing more harm than good.

Who cares about economy, we have kiwis buying houses from each other, listening to real estate agents and inflating the prices so we all collectively feel rich.
When we feel rich, we spend large. It doesn't matter if we have the money or not. We are rich so let's buy the biggest TV out there and the luxurious car we can get.
Someone else will pay the debt we are collecting in.

We shouldn't even bother with trying any innovative business anymore. Might as well take the kids out of schools and just teach them about using equity from one house to buy another for perpetual prosperity.

It is the only "skill" in this country that matters anymore, by a long shot.

That is the dumbest analysis of the causes of the GFC I have read. That is not to say that Govts were not to blame - but it was their failure to properly regulate the financial sector (including the repeal of Glass–Steagall in the US) that created the ballooning private debt that caused the GFC - not their 'spending'! When Govts spend more than they tax, this *reduces* non-Govt (private) debt.

It was interesting to see that Venezuela has basically adopted the USD for trading. Their inflation is so high they had single "500 Million" notes and the cost of printing some of their notes was more than the note was worth. They have now tried slashing 6 zeros off of everything but you know they are wasting their time when they are swapping a stack of bills for a single USD$1 bill.

If only they'd implemented socialism the *right* way, they wouldn't have to adopt the currency of the damned infidel capitalists!

Socialism is the way of the future! Everyone will want to work for nothing so that we can give those that don't work the best quality of life. You will put in 100% effort and love it :D /s

If only they'd voted for the *right* guy, the one that wasn't a socialist!
Then the US wouldn't have had to enforce sanctions on them as if they were a terrorist nation.

Venezuela were royally stitched up by the IMF and ended up with large debts in US dollars, which they couldn't afford. They have ended up exporting crude oil at low prices to bring in the US dollars they need to re-pay their debt, and then paying too much for refined oil (in US dollars) because they don't have their own refining capacity! The lesson for any developing economy should be - don't trust the IMF and focus your efforts on reducing dependency on developed countries who will always screw you over.

Fact is, the RBNZ messaging of late is that the economy doesn't need massively stimulatory interest rate settings, and that we will head back to neutral levels of the OCR. Based on their last estimates, this is 2%.

Anything else is just noise.