Rapid fire breaks out in the mortgage wars as combatants each aim at marginally different territory. Borrowers watch as the landscape becomes very fluid very quickly 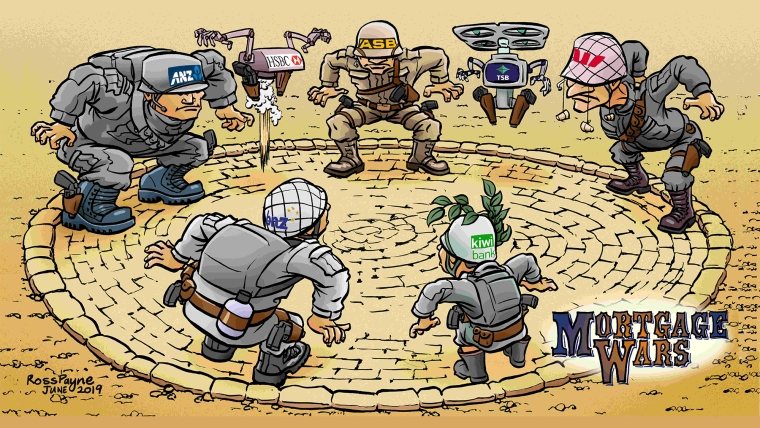 Update: Bank of China has launched New Zealand's lowest home loan rate of 2.79% fixed for one year. They have also reduced many other rates, including their floating rate.

That matches ASB for a two year term.

But Westpac has staked out a competitive position for fixed term rates that are longer than two years, with the lowest fixed rates of any main bank for all terms out to five years.

The Co-operative Bank has adjusted down as well today, and they have concentrated their fire on the short end. In fact, their new 6 month fixed rate of 3.09% is market-leading for this term. Borrowers who have decided that further reductions are ahead may well think a six month fixed rate at this time is a good idea. 2020 Spring 'specials' may turn out to be when the most competitive market conditions arise as the real estate markets attempts its usual seasonal upturn, and the full effects of the acute phase of the economic crisis are plainer to see, (But of course, new travails could also appear too. The future is never settled.)

Tuesday's changes come rapid-fire after Monday's ANZ (2.99%) and TSB (2.89%) cuts, themselves reactions to ASB and Kiwibank who was the leader in this latest home loan rate dive.

Only BNZ is yet to launch a response in this round, even if it did start with a competitive 3.05% rate for 18 months - a level that now looks ordinary.

Of course, these main bank reductions are not the first banks to go below the 3% benchmark.

All banks are reporting squeezed net interest margins (NIMs) and with matching term deposit rate cuts, banks show they are serious about protecting margin, and that savers are the group paying the price for low borrowing rates for homeowners.

Despite the lower fixed rate offers, there is still no suggestion from any bank that floating rates will be reduced, and it is floating rates that are the basis for SME lending. These borrowers are being quietly passed by.

The world is changing fast and we now need your support more than ever. Quality journalism is expensive and in these very troubled times our ad revenues are becoming very uncertain. We provide our coverage free to readers, and if you value that, we ask that you Become a Supporter. The level of your support is up to you. Thank you. (If you are already a Supporter, you're a hero.)

Wholesale swap rates have fallen sharply in lockdown although the latest daily shifts have seen that retreat end and a kind of floor may have been found. See the charts here.

Here is the full snapshot of the advertised lowest fixed-term rates on offer from the key retail banks.

Rates are interesting but more interesting is the adjustment to banks valuations. Anyone in the mortgage broking community have any thoughts on how much reduction we are seeing in bank valuations ?

Well if they are listening to their bank economists then 10 to 12%. Be interesting to learn if they are or not.
Currently probably more pressing issue to banks is borrowers’ job and pay security. They are more likely to concerned if the mortgage was not being serviced rather than a greater than an expected (relatively short to medium term) fall in borrowers equity.

Waiting on SBS bank to drop their rate. Come on guys!

Be a man and drop it to 0. Better yet - pay me to take out a mortgage.

Still EXTREMELY EXPENSIVE RATES taking into account the recent reductions in OCR. Banks must pass these to customers instead of increasing their margins!

Why?, they aren't in this game for your benefit...

No, apparently just for the opposite.

EDIT: And the reserve bank seems to agree:

Fixed home loan rates are more connected to retail deposit rates than they are to the OCR. Do you want term depositors to earn nothing?

They already earn nothing, they'd rather put their money to work in productive economy.

I am sure retirees dont view 2.x% TD as "nothing"

Damn. Gotta keep the music going. The Reserve Banks is really are doing all to protect the over foreign profit machine called the retail banks. Who's really calling the shots in NZ...

Why on earth would you fix for 2 years? Can't we see the trap they are looking to set? We know interest rates are declining globally and the most plausible prediction is that will occur here. Unless of course the RBNZ are given a new mandate.

Because you might be concerned about job security or the possibility of equity dropping below 20% when it comes time to refix in 1 year.