RBNZ given free pass to chill, as retail banks expected to continue to raise mortgage and deposit rates to close funding gap 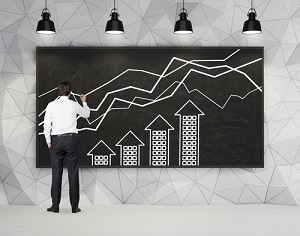 Mortgage and deposit rates are expected to keep increasing this year, despite the Official Cash Rate (OCR) remaining the same.

ANZ economists, in their latest Market Focus publication, say the spike in rates is likely to “persist”, due to higher wholesale rates, a turn in the credit cycle and the need for banks to close a funding gap.

This will buy the Reserve Bank (RBNZ) some time before it raises the OCR from 1.75%.

ANZ economists explain average fixed mortgage rates across the major lenders have increased by 0.1-0.6% points since the end of September, with some floating rates also rising.

Term deposit rates (longer than 12 months) have increased by about the same amount. Funding gap has narrowed but is still too large

“While some of the movement can be put down to higher wholesale rates and shifting perception towards the RBNZ (from potentially cutting to hiking), the moves, especially most recently, have occurred largely independently of shifts in wholesale interest rates,” ANZ economists say.

“This disconnect will partly reflect timing (swap rates spiked pre-Christmas) and typical lags at play (mortgage rates do not bounce around as quickly or reactively as petrol prices for instance), but also reflects other influences.

“We noted extensively over the latter part of 2016 that the large gap between bank deposit and credit growth was unsustainable, and that without a further ramping up of banks’ offshore borrowing (which would not be desirable from a financial stability perspective), higher deposit rates and increased credit rationing would result. We are now clearly seeing that. 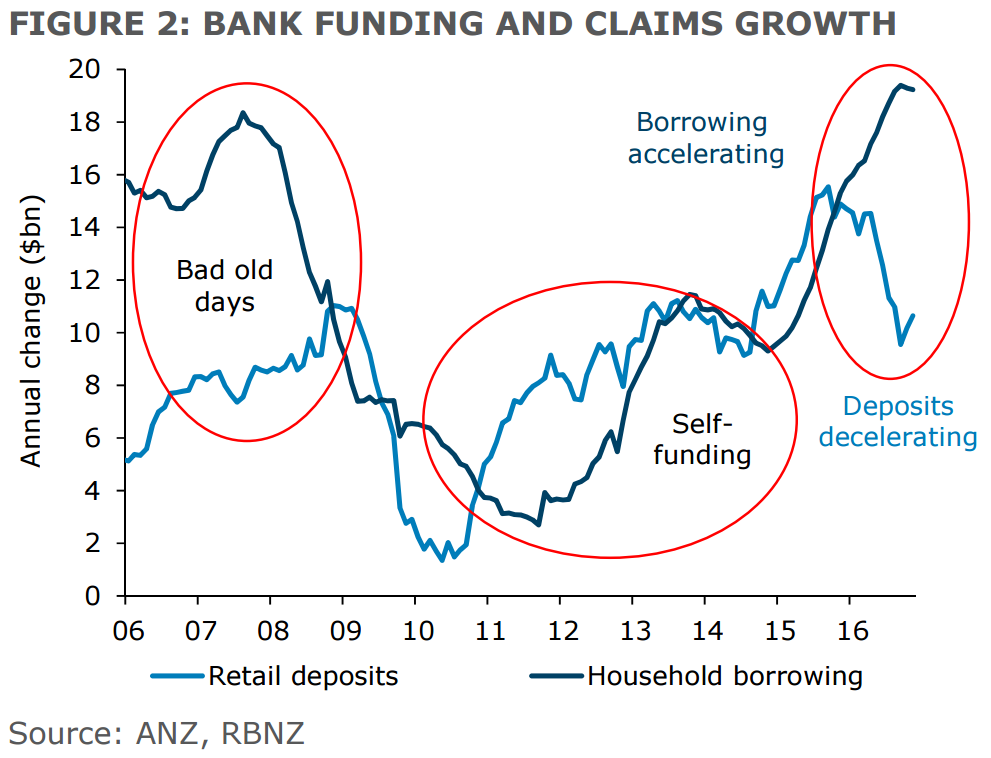 With retail banks raising rates, this will take pressure off the RBNZ to act. “Banks are implicitly doing the central bank’s job for it,” ANZ economists say.

While the official line is they don’t see the OCR moving until June 2018, ANZ economists say there’s a risk of a move sooner.

The New Zealand dollar is strengthening again, there are growing capacity pressures, there’s been a turn in the domestic and global inflation cycles and growth activity is continuing to be strong.

Credit crunch to dampen spending across the board - even housing

However ANZ economists maintain rates rises will slow credit growth, which will dampen demand. This is expected to see GDP growth of 3½-4% ease towards 3% over the year.

They also believe a credit crunch will constrain house building in Auckland, intensifying the shortage.

That said, the economists note the Auckland housing market is cooling slightly, and “activity is unlikely to get back to its dizzy mid-2016 heights in a hurry”.

“Falling mortgage rates, together with prudential restrictions, and a likely more active Government response lifting supply, is a significant combined set of headwinds in our eyes.”

As higher rates sees the pendulum swing towards saving, as opposed to spending, ANZ economists also believe households will start closing their wallets.

“Supporting our case, the latest Electronic Card Transaction figures pointed to a softer end to the year for household consumption than was seen over Q2 and Q3.”

All good stuff. But at this point there still is a very large gap between new borrowings and new term deposits. Who knows if that recent blip will continue.
Remember that term deposits are not now able to be broken at a moments notice like they used to be (unless there is proven hardship). So the whole concept of term deposits and being able to take them out quickly has been degraded. Additionally, there is now the OBR, and the ability to issue covered bonds so they are way less secure than they used to be. What I'm saying is that I am not sure if the banks deserve to have more money deposited with them.

Is that one reason why they have been lowering oncall bank accounts, to push people into term deposits, as they expect there maybe a run on the banks in the near future? The world is very uncertain at the moment, especially prior to Trump and Brexit, and all the wars and conflict occurring.

Are't these rules regarding term deposits not being able to be withdrawn at a moments notice, supposed to be about the money laundering policies?

It looks like Rabo has reduced both their oncall and term deposits today, or over the last few days.

"Are't these rules regarding term deposits not being able to be withdrawn at a moments notice, supposed to be about the money laundering policies?"
No. Its to aid the financial stability of banks. To make a "run on the bank" more difficult (slow).

I was partly saying that tongue in cheek not expecting that to be the reason, but that is a bit scary that they are potentially planning for stuff like this.
The other option I guess is for the government to guarantee our deposits, like many other 1st world countries like Australia who do it up to 250k.

Attract more deposits from where?

I think RBNZ uses that term so often that they believe it. What they believe is deposits will appear during a credit crunch because they want them to. The only way that could happen is if RBNZ generates money to deposit in the banks. Seeing it would appear as deposits the only way that would happen is by helicopter money. Seems like a perfect way to keep the bubble growing.

Generally though, when Credit is subdued, deposits do experience an increase. Most lending requires some sort of deposit (eg if you're buying a house, you have been saving) ... albeit not in the same quantum of course

The govt could have done that with Kiwibank but probably can't now because its now owned by multiple parties, all with profit drivers.

If I was the RB I would have encouraged them to have very healthy margin and/because -
1 It could support a low OCR/exchange rate while discouraging speculative asset investment
2 I would have required them to deploy the larger margin as increased equity to buttress them against any future economic shock especially as the capital adequacy ratios of the NZ banks have fallen too far as their lending has increased. The Aussie govt required this for their banks so money left NZ so the parent banks could do this.

Boatman - how big are those "massive margins" ? Can you please clarify and obviously compare globally thanks

NZ has suddenly become 'high risk' as it's main buyer for Auckland has been caught on the back foot, leaving us all high and dry.

Money is pouring out of China as rapidly as it once poured in. That’s a dilemma for Xi Jinping.
https://www.bloomberg.com/news/articles/2016-01-14/china-s-capital-flig…

FYI, Today I was offered the following rates:

Thanks for sharing Yvil, much appreciated.

Which bank is this? My mortgage is due for renewal soon :)

The interest rates rises in the last couple of months has been pretty minimal and shouldn't be happening at all.
Does anyone know how much more he Banks are paying for their money and where it is coming from?
If it is the U.S. Then these increases will not continue as the boom is not going to happen in the States with Trump there, quite the opposite.
The Don has no real interest to lead that country and will become an absolute circus.
Interest rates rise dramatically and people don't spend and flows onto all business's and therefore GOVT? Won't want that in election year.
Rates go up and the dollar stats strong so no good for exporters.
Interest rates under 6 per cent are here indefinitely!!!

I don't agree, I think you will see a huge change in the USA. The money men have found a new way to make their money.

Rates are going up :D and up and up

lol at figure no2

I find it amazing how quickly things can change. It wasn't that long ago that everyone was talking about deflation and negative interest rates and becoming Japanese. 6 months later the talk is about high interest rates and high inflation.
It just goes to show that there is no point looking at economic predictions; some are right some of the time, which makes them all a waste of time.

ANZ, I'm a long standing customer of theirs with several mortgages

With the OCR at historic lows the banks have de-coupled from the NZ economy moving interest rates up. Restaurants and Cafe's are the first sign there's less money at the end of the month once the Mortgage Barons have been paid. In two months another interest rate rise will show more home made lunches at work and less retail, Fuel is expected to rise again shortly, so even further erosion of everyones buying power. The banks are on a race back to 7%, so get ready.

Don't forget RBNZ love interest rates to push 9%+ when they want to burst the bubble.

So who is going to be able to afford a home now with massively high mortgage rates?

Anyone getting a mortgage shouldn't be just looking at what the rates are now. They should be budgeting on the rates increasing. The current rates are artificially low due to economic conditions.

Dictator, why are you saying the RBNZ would like interest rates at 9%+ ?