Bascand, who is also the RBNZ's General Manager of Financial Stability, said in a speech to the 54th University of Otago Foreign Policy School in Dunedin that the bank had left its loan to value ratio (LVR) policy unchanged in its May Financial Stability Report [FSR], in order to monitor the effect of the recent reduction in the Official Cash Rate and the recent fall in mortgage rates.

"Looking ahead, we are comfortable with further easing in the LVR policy over time, but this is predicated on risks continuing to abate.

"Specifically, we want to see household debt levels remaining stable relative to incomes, prudent lending standards from banks, and moderate house price inflation. If these conditions are met, we are inclined to continue easing the restrictions."

The Deputy Governor's comments may be seen as giving a tentative green light to further relaxation of the rules when the next FSR is released in November. The past two November FSRs (2017 and 2018) have in fact included announcement of relaxation to the LVR rules that have now been in place since 2013. The last set of changes applied from January 1 this year.

Interestingly, the International Monetary Fund chimed in on the subject last week, saying it sees "limited scope" for the Reserve Bank to further loosen the rules - the 'speed limits' - around high loan to value ratio (LVR) lending and says that "mitigating supply constraints" is critical for improving housing affordability. "The scope for easing macroprudential restrictions is limited, given still-high macrofinancial vulnerabilities," the IMF said.

When the LVRs were introduced in 2013 the RBNZ was at pains to say they were 'temporary'. But increasingly in recent times the official view of that has been visibly changing, amid suggestions that the LVRs are likely to be left in place permanently but perhaps would just be made 'non-binding' at times when they are not seen as necessary.

Bascand has addressed this issue in his speech:

"In the long term, we face a choice between removing the LVR restrictions and maintaining a permissive setting," he said.

"A full removal would of course eliminate any efficiency cost, and could be done alongside the deployment of a less intrusive tool if we are still worried about residual risks.

In reference to the current proposals by the RBNZ for banks to materially increase the capital they hold to increase the resilience of the financial system, Bascand noted that the proposals include a more prominent role for the 'counter-cyclical buffer' of capital, providing more certainty that this buffer will be built prior to a downturn in the financial cycle, in order to support lending during a systemic crisis.

"As a consequence, macroprudential tools, including the LVR restrictions, may need to be used less actively. That said, different tools are effective for addressing different risks, and there will still be a role for borrower-based tools to more directly address risks associated with household debt."

He noted that three capital and liquidity instruments were available, including the countercyclical capital buffer, the 'sectoral capital requirement' and the 'core funding ratio'.

"These tools build additional buffers for the banking system to absorb adverse shocks. In a downturn, these buffers reduce the risk of bank failure or deleveraging, and can be cut to support the supply of credit to the economy. The single borrower-based instrument we have is the LVR restrictions. In our view, a debt-to-income (DTI) tool would be a useful addition to our macroprudential toolkit."

The continued reference to DTIs is interesting. The RBNZ had moved to get a DTI tool included in the macroprudential 'toolkit' toward the end of the last National Government tenure. But even though then Governor Graeme Wheeler had promised the RBNZ would not use such a tool at the moment, the then Government pushed back against its introduction - and Labour has spoken out against such a tool.

Bascand said in his speech it was worth noting that all tools come with possible costs to financial system efficiency.

"For example, capital and liquidity tools increase the cost of credit provision for banks, while borrower-based tools curtail credit availability. Both of these effects could reduce short-run economic growth. We need to choose the right tool for the job to have confidence that the benefits to financial stability exceed any costs to efficiency."

He estimated that, had the RBNZ not imposed the LVR restrictions, mortgage losses in a severe economic downturn involving a fall in house prices would absorb nearly all the capital banks hold against their housing loans. 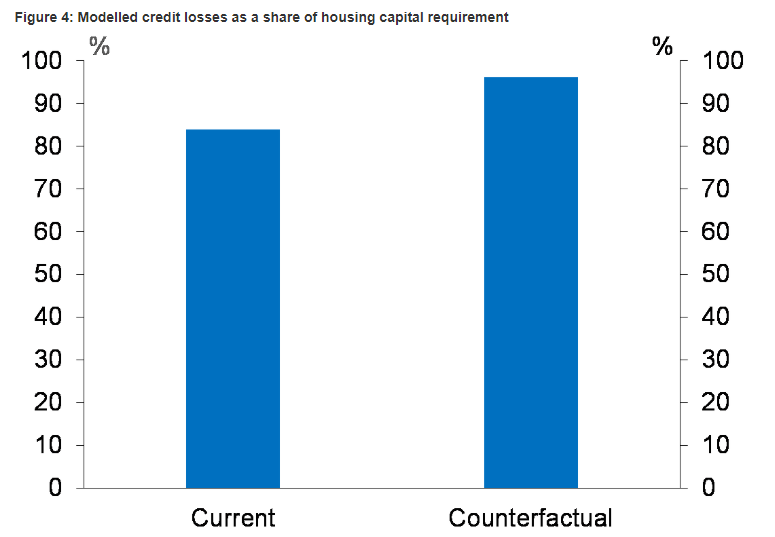 "Under the current environment, mortgage losses in a severe downturn are estimated to be lower, showing that the LVR policy has improved the resilience of the banking system."

Bascand conceded, however, that the LVR policy can also work against the social objective of housing affordability.

"To be clear, the Reserve Bank does not have housing affordability as an objective, but it is sensible to be aware of the impact of our actions on the other goals of the government.

"A uniform calibration for the LVR restrictions, as was the case in late 2013 and 2014, is likely to restrict the access to credit for first home buyers, who tend to have less savings for a deposit and have not benefitted from previous house price appreciation.

"These controls that restrained first home buyers were necessary to protect the financial system, and to stop buyers from taking on too much debt and becoming distressed. In contrast, the effect on investors from a uniform LVR policy tends to be weaker in a rising market."

Recalibration of the LVRs

Bascand said the RBNZ had "recalibrated" the LVR restrictions over time to target the "riskier forms" of investor lending, "as the emerging evidence points to greater risks associated with highly leveraged investors".

"This also had the effect of rebalancing the burden of policy away from first home buyers. The share of new mortgages going to first home buyers has risen from 10% in 2014 to 17% by the end of 2018, a historically healthy level.

"In the recent years, first home buyers have accounted for the lion’s share of the high-LVR lending permitted under the policy."

Latest figures from the RBNZ in fact show that FHBs are continuing to increase their share of mortgage borrowing.

Bascand said housing affordability remained an important challenge for public policy, and structural reforms were necessary to improve affordability in the long term.

"The LVR restrictions are for the purpose of enhancing financial stability, and aren’t suitable for addressing broader social challenges."

Bacand said an underlying concern the RBNZ had with the LVR policy was that risky lending could shift from banks to non-bank lenders who are not constrained by the policy.

"While there has been some growth in mortgage lending by non-bank lenders since 2014, their funding of purchases in the housing market remains very low.

"Non-bank deposit takers [NBDTs] account for less than one percent of total mortgages with an LVR of more than 80%.

"This evidence suggests that the LVR restrictions policy has remained effective for a longer period than we had initially thought." "mortgage losses in a severe economic downturn involving a fall in house prices would absorb nearly all the capital banks hold against their housing loans."

That says it all.

So rather than have the banks suffer for their recklessness, they will punish the very people who have been hardworking and responsible by saving their money. How stupid. The property prices in NZ and Australia compared to other countries around the world is overpriced by at least 50%, so anyone with a modest level of intelligence knows the banks are already in a negitive equity position on the bulk of their loan portfolio. Its just a matter of time now. Better hope Kiwi's and Aussie's don't wake up to reality anytime soon! Then the banks will have nowhere to hide.

They could try and squeeze in and hide here with the RBNZ.

“Bascand conceded, however, that the LVR policy can also work against the social objective of housing affordability.”
Considering that “credit creation” for housing loans is the biggest contributor to the increase in house prices I think he may be a little of the mark with that comment.

Yes, it seems the RBNZ has failed to recognise that its LVRs have (after some evolution) had the effect of making space for FHBs, preventing them from being crowded out of the market by bank's loose lending to "investors' etc. The RBNZ should be saying to the Govt that its LVR policy (with LVR limits of 60% on investors) has been very supportive for housing affordability for FHBs.

Unwinding LVR limits further will simply enable investors with their credit-induced capital gains to continue to pre-empt FHBs in any house purchase competition.

They should be considering using more of what has worked, not reduce it.

Agree, however you can appreciate why they don’t keep using what works when it would run contrary to their inflation targets. How are they meant to achieve inflation if they can’t increase the price of houses and accordingly loans (created money and inflation)? Our policies are sadly contradictory and to our detriment.

So how do you achieve moderate house price inflation and increase affordability? I’m sure we’d all like to know, Mr Bascand.

If they want to see "prudent lending from banks" how does this jive with relaxing LVRs ?

Prudent lending would probably be 3x income and 30% deposits.

Yes, if banks were lending prudently then the existing LVR limits would already be "non-binding" and so relaxing them would not have any effect.

Banks cannot help themselves but to compete on riskiness of loans to secure market share, it is naive for the RBNZ to think otherwise, unfortunately it seems we have a naive RBNZ.

Naive or corrupt RBNZ. Which one is more likely?

Prudent lending should be lending to productive businesses and not speculative houses. We’ve strayed so far as a country.

The UK gets it right max 5x salary although that's difficult to get 4 to 4.5x is the max most people would get. It amazes me the huge mortgages people take out in Auckland on their salary multiple it's crazy who wants to be strangled by their mortgage.