The recent surge in mortgage borrowing has seen the country have the highest annual growth in outstanding mortgage money since February 2008; the recent strong growth in savings is starting to reverse

Property
The recent surge in mortgage borrowing has seen the country have the highest annual growth in outstanding mortgage money since February 2008; the recent strong growth in savings is starting to reverse 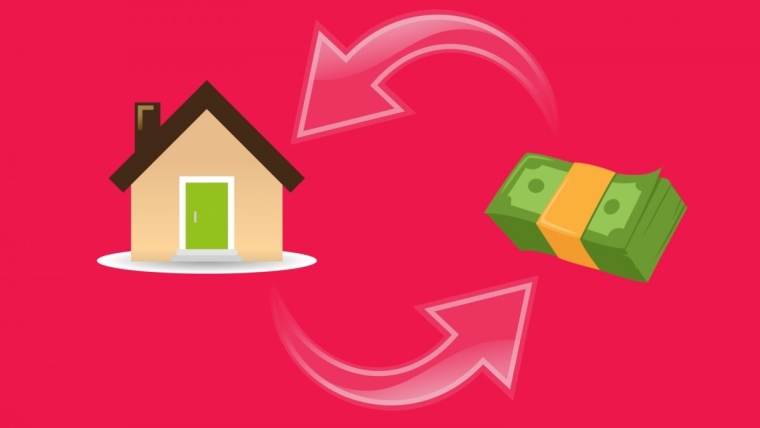 The surge in mortgage growth has continued in the past month, while the recent strong growth in savings now seems to be reversing quite quickly.

New Reserve Bank sector lending figures show that in May there was another $3 billion increase in the amount of mortgage stock outstanding in the country, bringing the grand total to $314.744 billion (including both banks and non-bank lenders).

The latest increase means that the annual rate of increase has lifted to 11.4% from 11% a month earlier and that's now the fastest pace of growth since February 2008.

If the rise and rise in mortgage debt has been making the country look a little one-dimensional in respect of its economy, May has brought a bit of encouragement through some stirrings in both business and agricultural lending.

Total agriculture lending stock rose by $196 million, mainly due to horticulture, but there was also a first (small) increase in dairy lending since August last year. Dairy lending has been falling sharply.

The annual decline in agricultural lending shrank to -1.2% in May from 1.5% in April. 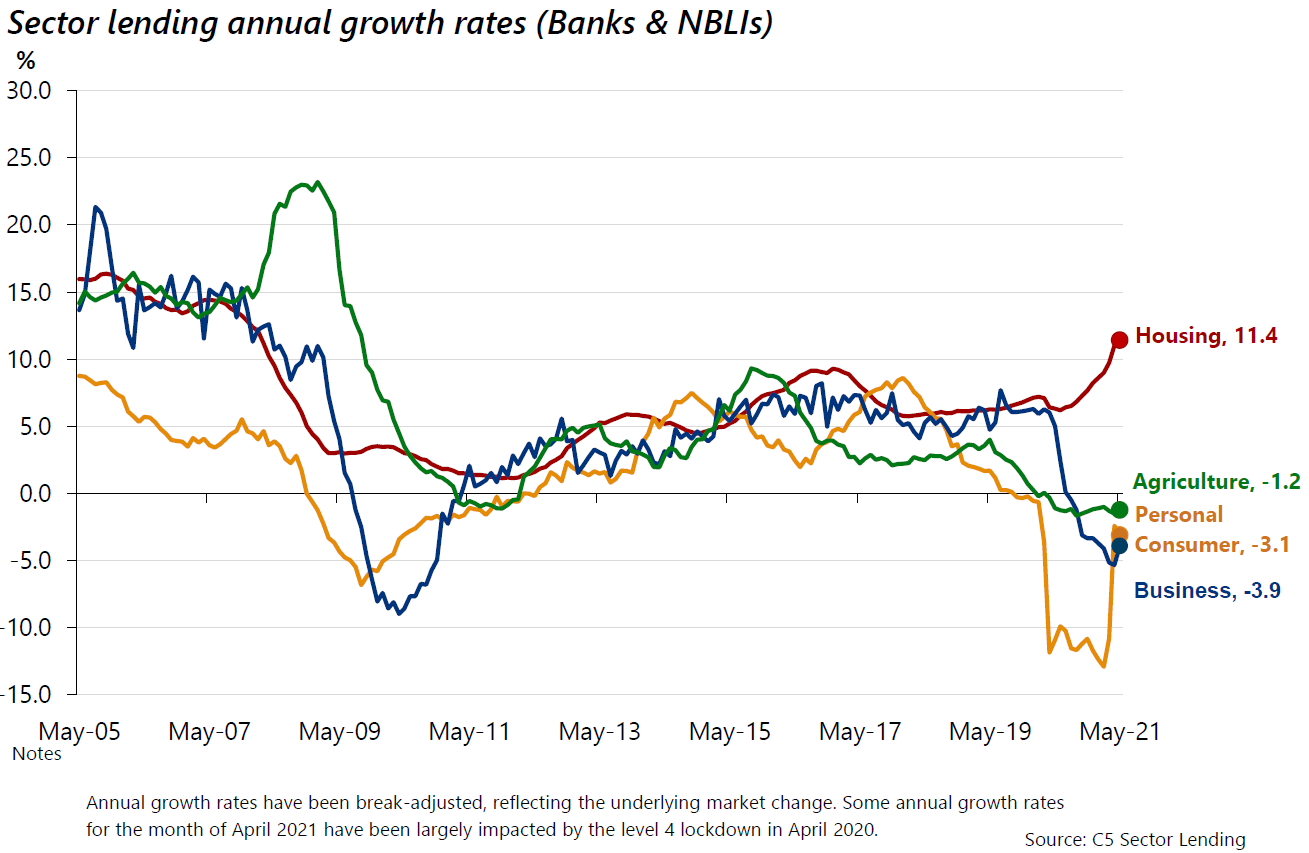 We've been borrowing up a storm, but till recently we've been saving some cash too.

However, the new RBNZ deposits by sector figures show that the big growth we saw in deposits during the height of the Covid crisis last year is starting to unwind.

Household deposits dropped to $203.98 billion in May from $204.937 billion in April. That was mostly down to another big drop in the amount of term deposits - but the amounts in savings and transaction accounts has now stagnated too. 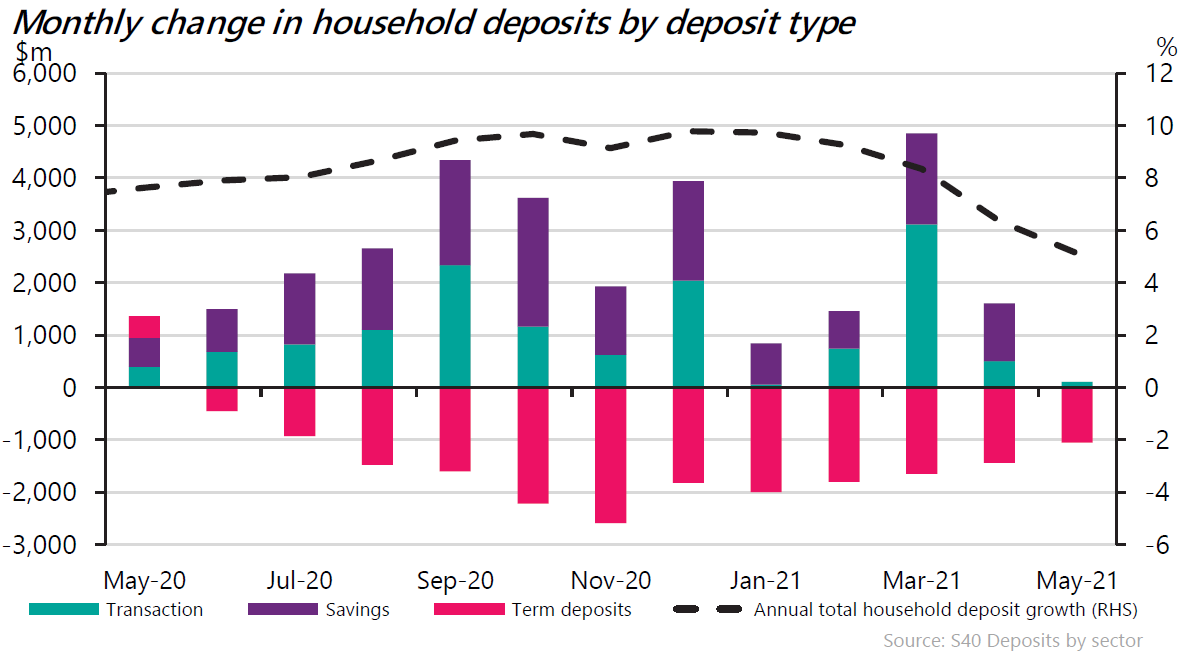 Why keep money in the bank when RBNZ can halve it by printing more. Just plonk it into real estate where there ain't a printer for it and the more they print, the higher the value of your estate in dollar terms.

Sure, no problem when you've money in the bank. Unfortunately, most young hard working people can't save anywhere near that amount, at least not without mummy and daddy.

But you're right. Hard work and saving gets you no where in this country. There's an easy solution, however.

Because it's grossly overpriced, costs money to maintain and is illiquid.

The RBNZ can't print Bitcoin either.

House prices are much more stable than bitcoin, and much harder for them to be stolen or lost, and are insurable.

RBNZ and Government want you to get filthy rich. There is no wrong time to buy in New Zealand, just go all-in. This gravy train runs straight to the moon and there are 'tendies' for everyone.

Neither Government nor RBNZ will ever let property crash because it would highlight the scale of their economic ineptitude. This is as close to a one way bet as you'll ever see.

When everybody believes this it's time to run a mile.

Its not the stock market Brock, every man and his dog is getting onboard, its confirmed with record lending. Everyone who can is going all in and putting all their chips on the table.

Isn't that the point where there's "no one left to buy".

Bit of a demand shock once that's occurred.

People said the same thing last year, five years ago and ten years ago. They where wrong then...but I suppose this time is different?

Agreed...20% and 40% LVRs provides some breathing space. If people are allowed to buy with little or no deposits and the market drops that's when alarm bells will be ringing.

However, the new RBNZ deposits by sector figures show that the big growth we saw in deposits during the height of the Covid crisis last year is starting to unwind.

You might want to consider the government net redeemed (bank deposits extinguished) $10.159bn government debt in the middle of May 2021.

Her Tootheness and the Fat Controller must be be so proud of their achievement.

Yes true to their work they were going to make a big difference to the out of control housing market!

The only problem with this wealth is that it requires more record debt to keep it afloat. And then more. And again, more. It's a bet that your children will carry vastly more debt than you, but that their children's borrowing will ensure return on their equity. I guess it's slavery without using the word. Born onto the debt plantation. There are more equitable alternatives to debt slavery.

Interest on total housing loans in 2016 was around $15bn per annum. Interest payments are around $10bn per annum at the moment. House prices will continue to increase until further action is taken to constrain the flow of credit. Supply is too inelastic to make any difference in the next year or two.

Yep. Party is not over. 2.5% is insignificant. All the incentives say throw your money at property. I hate to admit it, because I’m on the wrong side of that equation, but it’s true.

It's hardly a surprising statistic with higher prices and more property built each year.

As 'sectoral balances' illustrates with this accounting identity, (S-I)=(G-T)+(X-M) private savings can only come from government deficits or a surplus in the country's external balance.