Dairy prices were flat at the global auction overnight, though the key Wholemilk Powder price rose by 1.9%

Rural News
Dairy prices were flat at the global auction overnight, though the key Wholemilk Powder price rose by 1.9% 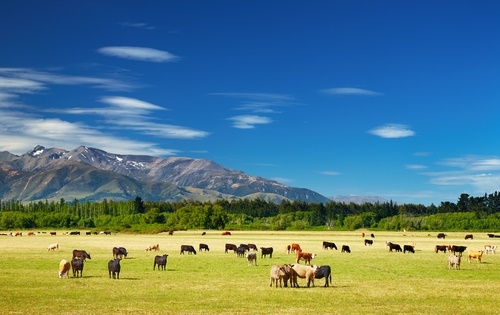 Dairy prices were flat in the latest GlobalDairyTrade auction overnight, with an average price of US$2336 per metric tonne and the GDT Index unchanged.

But with no immediate sign of strong improvement in the prices, ANZ economists see the current price levels as implying that Fonterra will have to downgrade its current milk price forecast of $4.25 per kilogram of milk solids for the current season when this forecast is reviewed next month.

The key Wholemilk Powder price gained 1.9% overnight, with an average price of US$2079/t. There was some encouragement within the overall WMP pricing in that contracts for later delivery showed increases of over 3%, which was an improvement on the trend seen in recent auctions.

ANZ agri economist Con Williams said prices for product to be delivered in the near-term were generally under pressure, but there was more positivity for later-delivery periods.

"The WMP curve regained a small upward slope, which was positive given how flat it had been recently and the higher seasonal volumes currently being sold."

"If this approach continues, it would imply a downgrade, with international prices having moved lower since May and the currency higher – a bad combination," he said.

"While this will continue to weigh on sentiment, any downgrade is unlikely to affect 2016/17 cash flow projections materially though."

Fonterra made its current price forecast on May 26, at which time it also re-affirmed an expected price of just $3.90 for the recently completed season. Farmers are looking at their third consecutive season of potentially below break-even prices. See here for the full dairy payout history.

The high value of the Kiwi dollar has indeed been causing concern and not just for dairy farmers, with the Reserve Bank last week most unusually announcing it would give an updated economic assessment, due tomorrow. The clear inference to be drawn was that the central bank was unhappy with the high dollar and was likely to indicate an interest rate cut in its next review on August 11.

One of the key sticking points seen in the market to the RBNZ cutting the Official Cash Rate has been the rampant housing market and the fear that rate cuts would pour more petrol on the fire.

However, yesterday, the RBNZ announced another round of loan to value ratio restrictions, which has been interpreted by the market as clearing the way for an all-out assault on the value of the dollar and likely interest rate cut next month, with possibly another to follow.

The actions of the RBNZ have already seen some easing in the value of the Kiwi dollar, which will have brought some, albeit slight, relief to farmers. When adjusted for currency movements the latest average WMP price in Kiwi dollar terms is actually 3.25% higher than at the last auction two weeks ago, with the Kiwi having slipped from about US72c to US70.3c during that period.

However, as some indication of how much marking of time has been done by global dairy prices so far this year, the GDT Index is down 5.1% since the last auction of 2015, while the WMP average price is, in US dollar terms, down 5.9%.

Commenting on last night's auction results, AgriHQ dairy analyst Susan Kilsby said global milk supply may slow down a little quicker than previously anticipated as the European Commission has agreed to provide more than €1 billion in additional aid for its farmers. Yesterday the Commission announced a €150 million aid package specifically to provide an incentive to reduce milk production. It also plans to prolong its intervention and private storage aid programmes for SMP.

“The additional aid granted by the EU will help to slow growth in milk production – a trend that has already started to occur, while the intervention programme will help soak up any extra SMP that is produced. This will be beneficial to the market in the short-term as it will allow global supply and demand to rebalance more quickly.

"...But continuing to support inefficient farms means we are likely to be faced with over supply situations again in the future”.

And how much longer will ASB be sticking to their $6 prediction for this season? As late as November last year Penny was sticking to his forecast of $5 in 2016 and $6.50 in 2017, despite the writing being on the wall. currently he's down to $6 for 2017 as a milk price forecast. Big gap between that and ANZ / every man with a brain's expectations of sub $4.25....

Rezone the land for housing and retail; build roads, sewage systems, electricity distribution, shops and houses, and then import yet more people to fill the houses and buy stuff?

And I thought the Monty Python men finished their tour of NZ in March . . . perhaps they've stayed on and now call themselves economists working for a particular bank?

It begs the question as to why the NZ Superfund has entered the dairy land market at such an elevated level?

I think SS, you have the same suspicions as me.

It would be more egg (or in this case cow manure ) on the face of National if there was an almighty crash in the assets of their fan base after they cheer leaded the white gold rush.

At $50,000/ha this purchase seems a bit exy in todays dairy climate.

Maybe the super fund is establishing systems in the dairy space, IE farm management protocols etc etc, just like they purchased shell , the long term purchase of Dairy land for the future of NZ is actually a good thing. Gummint can borrow at 2.5% , and the land can produce a return if purchased at the right price....

The price must be right for NZ, but at the end of the day, most NZers would like that land to stay in NZ hands.

This in my opinion will play out mid-late 2017 and may be an election issue... especially if WP makes a move as he has established some rural credibility now....

I dont disagree with the principle of the Superfund buying prime dairy land. Indeed I deem it a far better alternative to widespread foreign ownership. However it seems odd that they would jump in at this point in the cycle.

It is clear that their must be a material correction occur as the most indebted farmers are forced to liquidate their holdings. Surely the superfund sitting on a pile of cash or with access to cheap money could then fill its boots. By jumping in now it has merely underpinned an unsustainable and unjustifiable price point and leads to the suspicion re underlying motives that Smalltown alludes to above.

I still see it as a beach head, its a lot easier to settle into 5-6 big farms that are stable and productive with good managers, then add to the portfolio. Cost averaging they have only spent 50mil its a 40bil book across NZ of which maybe 10bil will be shaken out, 50 mil is only 0.5% of the 10bil

Good Managers will be essential, in some cases they may well be the existing farmers........

I think you mean FarmRight

What about MyFarm? oh yeah they were advertising for buying farms a couple of years ago and now they're selling them or losing equity.......really know their game don't they!

How could strategy and activities contrast to those of Landcorp.

Thank you for the sanity injection.

Fonterra's Chinese partner forecasts big loss after milk powder scandal
http://www.stuff.co.nz/business/farming/82289543/fonterras-chinese-part…
Previously Beingmate had predicted a $21m profit, but in its latest forecast it said that due to "fake infant formulas" it had revised this to a loss of between $44.5m-$48m.

https://www.youtube.com/watch?v=HaoySOGlZ_U
nothing about management fees.

The performance forecast mainly due to the reporting period by the market of fake milk powder and milk powder incident Deal Formulation of business registration disorder transition effects, leading to the main business income of less than originally estimated , so that the home Net profit to shareholders of listed companies at a loss .

If you are thinking 15 years out as SF do, prime dairy land is fine as an investment. Long run demand is good, fat is in, and sugar is the new fat. The issue is the next 18 months for dairy farmers with high costs and gearing.

If there is 18 more months of pain, why enter the market now though? Agree with the beach head or portfolio theory referred to above Orr might be employing here. For $50k a hectare though he would be better buying land in Canterbury, better prospects long term than Southland

$50k/ha was going concern so includes stock and machinery. Water and environmental concerns are greater in Canterbury than Southland - but I maybe biased. ;-)

At today's prices stock and plant, shares would equate to maybe $10k/ha. $40k/ ha still generous. Canterbury has alternative land use options that Southland doesn't, and a better future re location proximity to Christchurch. $40k / ha would buy some good quality land in Canterbury today (I also could be biased)

Agree $40/ha is still generous - especially if you are contracting out management to FarmRight.

There's a difference between buying land on which you intend to live and buying land on a pure business case basis on which you don't intend to live. Living in a region is not a consideration the NZSF needs to have, neither I would have thought is alternative land use options and to a lesser extent, location. We will have to agree to be divergent on our views re respective regions. :-)

Trouble is this "18 months more of pain" is being taken as gospel. What they are basing this "recovery" on in 18 months is .... NOTHING - Sorry, but all the signs point to the fact we are only just entering a global financial depression. Japan is bust, europe is a basket case, china is teetering, the US is the best insolvent dealer out there. And Oil companies are in trouble without a major increase in OIl prices, which is the last thing the world economy can afford. Yes, good times ahead just round the corner.