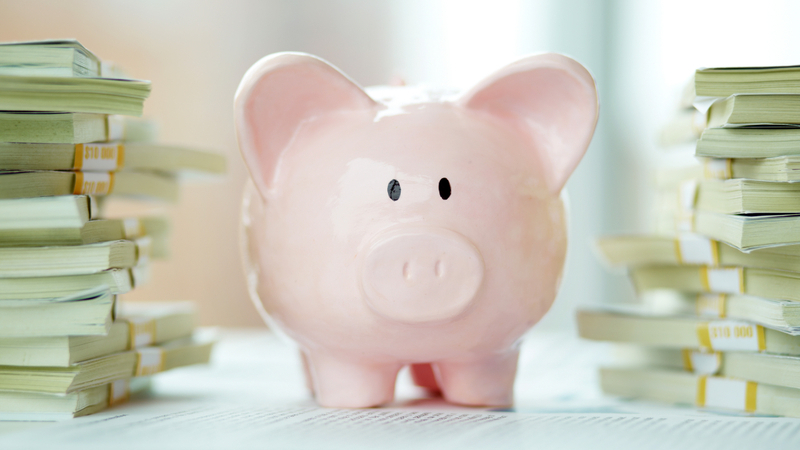 Interest rates might appear to be disappearing down the plughole, but savers are still saving - very much so according to latest Reserve Bank figures.

The RBNZ said that in May some $417 million extra was put into term deposits.

That was only the second increase in the amount of money in term deposits since August 2019 and was the largest monthly increase in exactly a year.

Economists have suggested that the plummeting interest rates might actually encourage people to save harder - and these figures might tend to suggest that.

In terms of total deposits held by households these again increased in May - though not by as much as in recent months, with at least part of the bulge in saving seemingly due to the receipt of wage subsidy money.

In both March and April there was a big increase in the amounts being deposited in both transaction and savings accounts.

The amount of mortgage money outstanding started to rise again in May having dropped in April due to the lockdown.

This means the amount of mortgage money outstanding has increased by 6.3% in the year to May - which is well down on the 7.1% rate of annual increase seen in the 12 months to March.

After the big movements in the past two months between interest only and principal and interest lending for both housing and business lending there was little change in May.

If TD rates keep dropping the banks will have to turn depositors away.

They will have to turn borrowers away as well, since deposits are created by banks when they purchase debtors' IOUs with their own IOUs.

they won't, they need to keep the loan-to-deposit ratios.

Has the liquidity trap begun?

how do you classify term deposits as holding cash? specially in NZ that does not have deposit insurance by the RBNZ. Term deposit is a debt instrument (the debtor being the bank) is it not? (it is at least according to the FMA)

Disagree with comment - "Economists have suggested that the plummeting interest rates might actually encourage people to save harder'
The reality is that other options - e.g. exposure to equities - are currently seen as far more of a risk than usual; hence the reason for more TD in past month.
Rolled over a 6 month TD for my 94 year old mother the other day - 1.7% on $550k. :(
For her, what other options are there?

Could get 2 brand new hips for that and have money left over.

Fergus
When you are 94 not much you can spend it on. She is happy.
Just leaving it in the bank to help out a FHB with a low rate mortgage? :)
Cheers

The other options are overpriced shares and houses. Im not surprised. The elderly like to sleep at night.

If she gets a bigger screen TV it'll be easier for her to see.

Perhaps a flame paintjob on her mobility scooter too, and some mags?

"Economists have suggested that the plummeting interest rates might actually encourage people to save harder - and these figures might tend to suggest that."
Is it the saving, or is it part of the big deficit spending by the government? surely some of that spending ends up with people (business owners and asset owners) who are:
1) already maxed at consuming, so no spending (specially as overseas travel is off the menu)
2) are unwilling to invest their surplus money in anything given the current economic climate.

It is not too difficult to accept that some people might be saving fearing what may come next, or expected deflation etc, but that does not mean all the increased in saving can simply be attributed to this. Government deficit spending will flow cash in pockets of certain people and some of that may end up (if not most of it given the reluctance to invest in their business) in banks.

The graphy thingo would be improved by the addition of two more series:

Especially, if the next CPI release confirms deflation.

It’s an entirely rational response in a low-interest environment, especially with a lot of risk around. You want 5%, you’re investing in junk bonds in the middle of a recession! The risk is simply not worth it. Anything profitable immediately has its price driven up until it is no longer a good investment. Welcome to Japan! Enjoy the next 30 years of stagnation.

"Nearly half of respondents to this ANZ survey say they intend to lay off staff"
I wonder if that has anything to do with it?

Japan is always brought up on this issues. Japan has been government deficit spending for years now. But almost all of this money is spent on heath care and pension of its ever aging population. They almost pay no money directly to working age families and their spending on unemployment or low income families (something big in Scandinavian countries as well as the UK, Australia, Canada and NZ). The actual income earned by the Japanese workers have been declining since 1990s (in real term). So these are the points:
1) Japan crazy money printing funds health care and pension. Both are unlikely to stir any serious spending (old people tend to own their houses, they do not eat that much, they do not need that many flash things, are not buying clothes etc, they are likely to spend money on health care, well they do not need to as government pays for it). They may save this money.
2) Japanese families and working age individuals are earning less and less income, this translates into less and less ability to consume. Thus further decreasing effective demand.
The way I see it the Japanese government is not doing anything inflation triggering, and its economic prospect is diminishing and is largely based on its export market (something they are losing).
NZ and many other countries welfare state functions differently (it pays for working age people to consume), their demographic is different (mostly due to immigration bringing in many people in their early working age years), their cultures are different, etc. Sure, they can also end up where Japan is, but they are not there yet. So if NZ government continues to deficit spending to put cash in pockets to spend, that is unlikely to cause stagnation, but it may cause stagflation (no real increase in economic output, it may even decline, but prices will increase as people compete more and more for consuming as they are enabled by money received from the government).

Remember fellow bloggers TDs are really commercial loans, no capital security as many found out during the GFC.

As you say, Term Depositors are unsecured bank creditors.

The smart money exiting the housing market as they know the crash is coming ? Where else is it coming from ? Not from selling a few unused items from the garden shed on trademe that's for sure.

Where is your evidence smart money is getting out of property, yes Todd corp sold up in Pegasus and Paraparaumu airport, but that was because they found a cheap gold mine in aussie to invest in . Smart money is holding good property, getting rid of non performing dogs, and reducing borrowing, that's not getting out, that's reducing risk.

Someone tell me please,what is the benefit for the average kiwis good health, in continually driving the borrowing rates down? and dragging the T. D's with them. I hope the bank investors don't suddenly become startled!! 2.65% today I see at BNZ. Already I just read on this site outstanding mortgages on the rise. I feel its irresponsible to encourage the punters to borrow heavily for housing without attaching the warning factors. As quick as the flick of a switch for one example, their house could be valued less than their mortgage.Surely in this modern environment no one can guarantee a regular occupational income for the next 30 years. Was ok once, but that was 'once upon a time:.'. To me this game is very difficult to reason. Looks like some undesirable sort of hic cup is created if people stay content with what they ve got.

Hang on this is not new. Well before CV19 NZrs were being encouraged to borrow to spend. A sudden and high velocity one eighty from all the previous bemoaning out of government, and their financial agencies, that NZrs have about the poorest savings record on the planet. Go figure!

If credit growth stops our property bubble bursts - and that would be like an apocalypse for the economy. RBNZ know this so have to keep lowering rates to encourage more lending and prevent debt defaults.

is there a breakdown of the length of the term deposits?as compared to previous years.do some still put it away for 2-5 years at low rates or is it all parked at terms of a year or less.

I warned of this likelihood on this forum weeks ago .

Money printing or QE and low interest rates designed to stimulate spending and money circulation (increase V in the monetary equation) has been shown to have the perverse effect of either encouraging people to pay down debt or save.

There is sufficient empirical evidence of this , and as I said in my post at the time the Reserve Bank Governor would have known this all along .

Maybe they've decided if they can't get the capital requirements for banks over the line, they can shift that burden onto households and try to get them a bit more cashed up for what is coming?

"Economists have suggested that the plummeting interest rates might actually encourage people to save harder - and these figures might tend to suggest that."

This was the main premise of an article just a month ago that clearly identified the relationship between savings and the OCR or deposit interest rates. Essentially the reserve banks/FED and ECB operated on the principle that reducing interest rates to zero would encourage spending and investment in productive assets, whereas the reverse became true once the rates dropped below roughly 0.75%. At that level the majority of people realised that they needed more funds stashed away in reserve to fund their retirement, even if it was at miserly returns, and as the returns fell lower they needed to save greater amounts so no investments were made and spending dried up, exactly the opposite of the intended consequence.
Thus ECB and Co. now are looking to reverse the NIRP and ZIRP policies in favour of moving closer to 1% or higher OCR or equivalent in order to get on the other side of the tipping point.

Either way, Banks are to blame for excessive greed. Thieving may be legal these days........Fraud is Paramount to save the Day.

Another form of legalised fraud-u-lent behavior is this type of Issue... becoming clearer by the day....and the day of reckoning is the next election Date. ....No more funny money........cos I ain't laughing.

Poor votors please note. "Do Not Wine About It"....Vote accordingly.