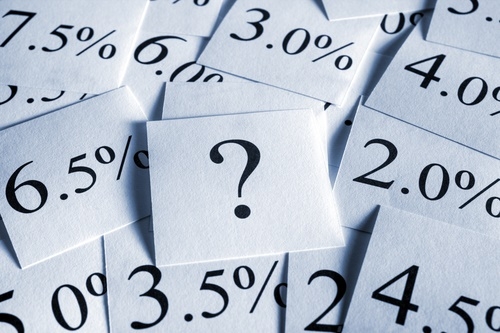 The Reserve Bank should leave the Official Cash Rate unchanged at 2.25% this Thursday, according to the New Zealand Institute of Economic Research's panel of experts.

NZIER’s nine-strong monetary policy 'Shadow Board' comprised of business leaders, economists and academics has, like the RBNZ itself, been juggling with the opposing forces of low inflation and a fast-rising house market.

The Shadow Board’s average recommended interest rate fell from 2.23% to 2.07% - not quite enough to recommend a drop to 2%, but still maintaining some downside expectation for rates in future. 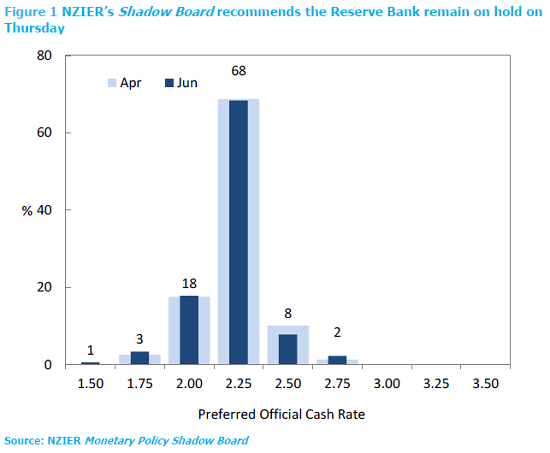 NZIER senior economist Christina Leung said the New Zealand economy was showing decent momentum, and there has been renewed interest in housing in the wake of the OCR cut in March.

"he acceleration in house prices is in stark contrast to the continued subdued inflation outlook. This tension is causing more headaches for the Reserve Bank.

"Although the Shadow Board recommends the Reserve Bank holds the OCR at 2.25% on Thursday, it sees increased downside risk to the interest rate outlook.

"The pick-up in house price inflation is concerning, particularly from a financial stability perspective, but as long as the Reserve Bank’s primary goal is on lifting inflation back to its 2% mid-point target it will see further scope to cut interest rates," Leung said.

The verdict of the Shadow Board is roughly in line with market expectations, which have gradually swung from expecting the RBNZ to cut again this Thursday, to expectations of no change.

The market sentiment has been altered in the past few weeks by continued firm economic news from within New Zealand, by increasing signs of heat in the housing market particularly now outside of Auckland as well, and also by expectations that the US Federal Reserve would raise American interest rates.

And while the latter expectation will have been knocked by surprisingly bad US employment figures released over the weekend, the RBNZ is seen as having the luxury of being able to sit on its hands at this OCR review because, unusually (and due to a change of timetabling) this Thursday's full Monetary Policy Statement OCR will be followed by another full MPS statement in August. Normally an MPS is only released every second OCR review. The RBNZ has in the past shown a marked preference for making any OCR changes in conjunction with an MPS, so that the decision may be fully explained.

While the Shadow Board members are given the opportunity to comment on their recommendations, just three did on this occasion.

Scott Gardiner, executive director of MYOB said pressures on commodity prices were still affecting cash flow in key rural sectors balanced off by supplies issues in housing, "which is perpetuating the double edged sword that the RBNZ has to manage".

"On balance we expect that rates will stay at current levels till past the middle of the year and gauge impacts on inflation," he said.

Arthur Grimes, an academic and former RBNZ chairman said there was no need to shift rates up or down at present, "so steady-as-she-goes is warranted".

Stephen Toplis, head of research at BNZ said BNZ economists were more worried about rising house prices than weak inflation "hence our bias towards higher rather than lower interest rates as our preferred, though not forecast, option".

Rate changes have virtually no effect on anything these days - so it makes sense to just keep it the same.

Actually I think you'll find that when the OCR rate drops so does the currency levels, though this tends to gradually kick in. The NZD could do with lowering to help exports and attract actual international business development.

If we do not have a cut on Thursday, have you any remote idea how high the NZD will go? The signal no cut would send to the markets is that Wheeler is scared of doing anything at all and is happy to continue sitting on his hands . The dollar will go into the low 70's like a freight train. Think what that would do for example to Fonterra's $4.25 per kg prediction for the coming season, among other things.

Lets face it, we missed the boats on cuts. Everyone else cut a long time ago.

I think our relative safety has more impact, and that seems to be coming into question a but more these days. i.e. can the banks handle a dairy collapse and a housing collapse?

I bet raising it up a full 1% would have an effect on borrowing. Regardless of the fudged CPI it can still be a tool. But I believe like you it won't be moved. He's reluctant to go lower and deeper into the rock and hard place they have put THEMSELVES in

Did he apply or volunteer for the job? He's paid very well as was Bollard. I'm happy for him to step down if he feels its all too much. Personally, much like the US FED, I don't believe they can win this game at all. It's like playing Monopoly until the bank runs out of cash. You just have to start over. They can keep playing all they like with the new funny money they created themselves, introducing ever more toxic assets of no real discernible value and pumping up housing assets until no one can afford them if they like. But the end of game is just being delayed and made more painful with each day,month & year they continue to deluded themselves as being in control.