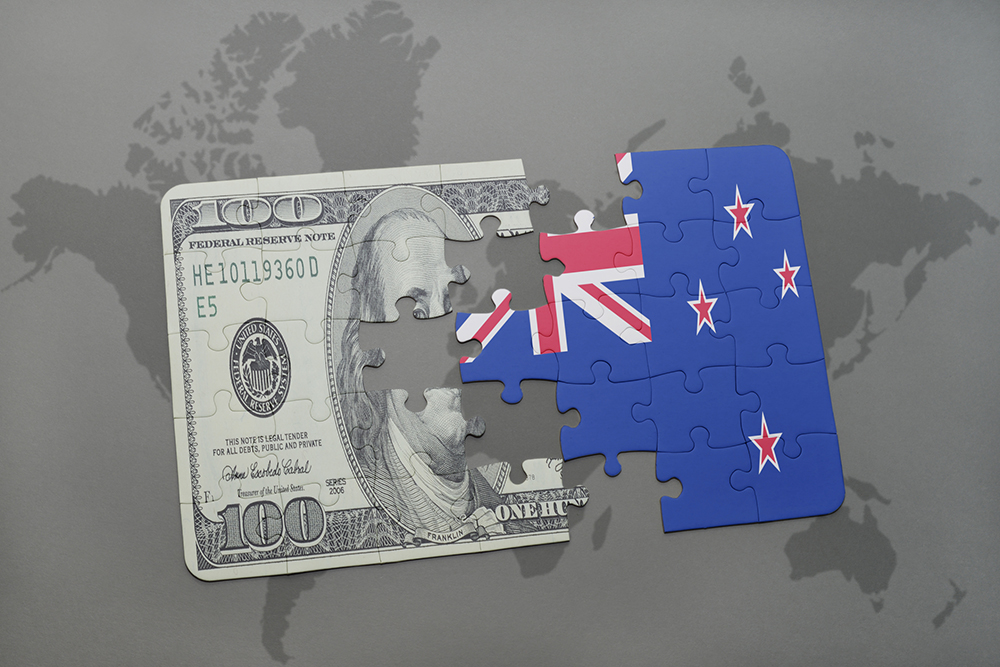 Wild swings of sentiment and direction in global investment markets over recent weeks has created an environment of turbulence and uncertainty that has to some extent side-swiped the NZ dollar.

Tumbling global equity markets are never a positive influence for the Kiwi dollar and the significant sell-off in US markets in late December (for a whole host of reasons) sent the Kiwi down to a low of 0.6600 on 3 January.

Adding to the Kiwi selling pressure at the time was a “flash crash” event in the Japanese Yen/USD currency market that saw the Yen strengthen from 109.00 to 104.80 in a matter of hours. The sudden and very large Yen buying was reported as being due to automatic stop-loss orders being triggered in the Yen/AUD market. The trigger for the panic (not uncommon in the Japanese Yen FX market from time to time) appeared to be Apple Inc downgrading its first quarter profit guidance.

Japanese investors are notorious at bringing funds home when there is extreme volatility in global investment markets, causing the “safe-haven” status of the Yen in currency markets.

The massive unwinding of long AUD/short Yen positions sent the Australian dollar into a nose dive to below 0.7000 against the USD for the first time since January 2016. The Aussie has since recovered to above 0.7100 following the latest speech from Federal Reserve Governor Jay Powell wherein he played down the inference that the Fed were on a predetermined path in raising US interest rates.

The sharp recovery in the AUD, has allowed the Kiwi to bounce immediately off 0.6600 and now it trades back up to 0.6730.

The NZD/USD depreciated 1½ cents from the 0.6850 level following the softer than anticipated GDP result on 20th December. The 0.30% expansion in the New Zealand economy in the September quarter was well below prior forecasts of +0.50% and it even prompted one local bank to immediately change their 2019 OCR interest rate forecasts from increases to cuts.

That seems to be an overly pessimistic outlook on the local economy which is still humming along on high commodity prices and extensive construction activity.

The reality is the timing of primary industry production and export volumes can throw the GDP numbers around between quarters in New Zealand. The NZ economy expanded by 1.0% in the June quarter, therefore a 1.3% growth increase over six months still seems robust to me.

Likewise, it does not pay to read too much into the exaggerated movements of the Kiwi dollar against the USD in thin/lower liquidity holiday FX markets. Local USD exporters who placed staggered FX orders with their bank from 0.6750 down to 0.6600 to increase hedging levels have been well rewarded as it appears the spike downwards in the Kiwi dollar has been very short-lived. Another likely reason for the depreciation of both the AUD and NZD against the USD over the Xmas/New Year period is the growing unease on the performance of the Chinese economy. Lower global growth forecasts for 2019 based on the US and China not maintaining their economic growth momentum of 2018 is certainly a negative for “growth/commodity” currencies like the AUD and NZD.

Should the current more pessimistic outlook on global economic growth (as reflected by weaker equity markets) transpire into reality through 2019, the outlook for the Kiwi dollar must be less positive than predicted through this column over recent months.

However, there is no guarantee that the equity markets have picked the weaker growth scenario accurately.

Much of the selling of shares in the US has been more about investors converting their spectacular equity gains from hyped-up technology stocks over recent years into cash. The markets also reacted badly to the mid-December Fed rate hike that was  not as dovish in the rhetoric as most had expected.

Since that time Fed boss Jay Powell has responded that they will be patient with rate hikes and they are monitoring both global economic trends as well as equity market conditions.

There are very mixed messages from the data on the performance of the US economy currently. November jobs increases were weaker than average at +176,000, however they roared back in December with a whopping 312,000 uplift. The ISM manufacturing activity survey was sharply lower in December at 54.1, down from 59.3 in November. The ISM index at 54.1 is at its lowest levels since November 2016. Perhaps the trade war tariffs are hurting the US manufacturing base (as was anticipated). President Trump’s trade wars policy was always likely to back-fire on him as it adversely impacts on the US economy and thus reduces his chances of re-election in 2020.

Two factors stand out over coming weeks/months as potentially stabilising jittery equity markets and returning confidence to manufacturers and exporters around the globe i.e. global growth does not fall away in 2019 as many are currently forecasting:-

Should these two events occur, downward pressure is removed on the Kiwi dollar.

Two local factors that are potentially more positive for the Kiwi dollar is the continuing recovery upwards in dairy prices (the last three GDT auction results have all been price increases) and a CPI inflation result on 22 January that is well above consensus forecasts of a 0.30% increase for the December quarter.

The RBNZ will cut Roger. Today's Barfoots data and the CPI data on 23 January will provide insight.

I hate to break your heart Roger, but there are a lot of storm clouds over your NZD bull, and they were brewing during all of 2018. NZD isn't a safe haven currency, so I can't see much opportunity for upside. Especially not if the FX markets catch wind of a declining property market and assess how exposed the NZ economy is to that.

I’m with Roger
The $NZ & NZ are safe haven
If they weren’t then people like Robert Prechter would not say so
Go do some reading www.elliottwaveinternational.com
Maybe Russia India China & Turkey will indeed choose to trade without $US we live in faster changing times
Old paradigms will be jettisoned

We are a very small fish in a big sea. I doubt anything anyone does in NZ influences the NZD as much as a computer program in some overseas office looking for "shorts".

NZ imports more than it exports - hello consistent trade deficit.
NZ has a lower cash rate than America - the global reserve currency.
NZ is approximately the 10th most traded currency in the world and I see no reason why this should continue!

The NZD could easily be trading at 50c to the USD by years end, lower if the RBNZ lowers our cash rate.

I hope things can be held together here, but I think NZ is headed south and fast. The window for making meaningful piecemeal change closed a few years back.

Kiwis consistently vote to cook their own goose and are addicted to journalism that makes Fox News, CNN and The View look like scholarly outlets.

Most Kiwis believe they are very informed and the likes of CNN are top tear news outlets oozing credibility. Very sad state of affairs!

I don't see an uprising in New Zealand, I just see it becoming more of a moral/drug cesspit. Poverty is rapidly increasing now and we're going to see continued outbreaks of third world diseases.

If you're rich you'll probably be alright, but going forward it's probably best to double down on actively avoiding poor areas and be vigilant when in "middle class" areas - unless you enjoy random acts of violence being committed against you.

How long have you lived in NZ Zack? It just seems like your perspective is more like what someone who has grown up in South Africa. Not dissing that at all if so however dont ignore the upside by becoming a victim of MSM yourself. There is a lot of good about New Zealand and most have a firm belief in our identity even if we are on the edge of the world in more than one sense. Apart from that we remain a primary producer of products the world needs and will continue to need. Our reputation for quality enables a premium in most markets. Our stable and functioning govt is a rarity in global terms with recognized economic stability. Education levels are relatively good and civil liberties high. If it all hits the fan you couldn't be in a much better place in my opinion. Yup there are some racist losers out there but thankfully they are a very small proportion. Get to know some of your locals a bit better:) All the best.

The problem is that 'we' is a small bunch of aristocrats. The average kiwi sees very little benefit. The best meat, cherries, timber, milk etc is sold overseas and the kiwis pay big bucks at the duopoly merchants. Job opportunities in these primary industries are low wage and increasingly automated away.

Tourism is another low wage industry vulnerable to oil prices and increasingly owned by foreign interests.

What a dystopian view of NZ you have. As someone who lived elsewhere for most of my life and chose to live here in my retirement,we see rather different countries.NZ certainly has its problems but they are not on the scale you set out.
I can only assume that you will be leaving us shortly.

I agree with most of Zach’s comments. The only question is timing. I’m guessing a long and gradual decline as our socialist govt consumes an ever increasing share of the economy, until we really experience “no go” areas and gated communities. When we get a real Marxist like Corbyn or Cortez in power, then we’ll see the waterfall stage into real poverty and open civil unrest. As we are a very tolerant and placid lot, I think this might be a way off...perhaps 15-20yrs. It won’t be pretty, but there will be few other civilised places to escape to then I’d imagine. Rural NZ or islands might be the pick.

As usual,I find Roger’s article about as useful as a chocolate teapot. That was a favourite remark of my grandmother.

So going to use your Grandmother's line, I'm going to get some mileage out of that one.

I wouldn't say it's all that useless. If you were to bet against Roger's predictions you could be the next Sir Chong Key.