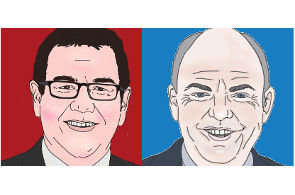 Chances are the next three budgets will be written either by Steven Joyce or Grant Robertson.

With the release of Labour’s fiscal plan last Wednesday we now have a clearer idea of how they would differ.

Labour would spend more. The big ticket items are $4.7 billion more for health, $4 billion for the families income support package announced two weeks ago and $2.5 billion more on education. Altogether, including $500 million more in interest costs reflecting a slower reduction in debt, it has committed to a cumulative $13.2 billion more than National in core Crown expenditure over the three years to June 2021.

That does not include $2 billion to kick start KiwiBuild and $3 billion for an earlier resumption of contributions to the New Zealand Superannuation Fund, both of which count as capital spending rather than part of the operating budget.

So how would that $13.2 billion gap between Labour’s spending commitments and National’s be bridged?

Only about half of it from a higher tax take.

Robertson expects to have $6.8 billion more tax to play with over the three years. Scrapping Joyce’s planned tax cuts next year – relief for seven and a half years of bracket creep – would save $5.8 billion.

Most of the other billion is supposed to become from brandishing a diverted profits tax at multinationals. Labour has pencilled in $200 million a year more than the Government from that source, with Robertson citing evidence from Inland Revenue to the finance select committee.

Going after “property speculators” through ring-fencing negative gearing and pushing out the bright line test for capital gains is only expected to yield a total of $180 million over the three years.

The biggest contribution to bridging it comes from allowing Robertson much less scope than Joyce for new initiatives in future budgets.

It is standard and prudent practice for budget forecasts to include a line, the operating allowance in the jargon, that allows for new initiatives, whether on the spending or revenue side, to be announced in future budgets.

Joyce’s Budget two months ago pencilled in a cumulative $11 billion of unallocated spending over three years to June 2021.

The equivalent provision in Robertson’s alternative budget, identified as the “spending allowance for unannounced policies” totals $5.8 billion over the same period.

That would give him a bit under $1 billion of new (previously uncommitted) money in each of the next three budgets, compared with a bit more than $1.7 billion for Joyce.

But the combined effect of the higher tax take and an operating allowance $5.2 billion less roomy than Budget 2017 provides allows Labour to forecast that it will run surpluses (in the operating balance excluding gains and losses) of $16.3 billion over the three years to June 2021 -- just $1 billion less than National’s.

By the same token the $5.2 billion smaller allocation for new money means that the net difference between core Crown expenses for National and Labour over the next three budgets would be just $8 billion or 3 per cent.

You could call a 3 per cent increase in spending by Labour (again this excludes KiwiBuild and Cullen fund contributions) either reassuringly modest or disappointingly unambitious, depending on your point of view.

It is only fair to say that the operating allowance is a number that moves around, depending on how fiscally constrained the Government of the day feels at Budget time. Under National it has gone from zero (remember those “zero Budgets”?) to $1 billion a year to $1.5 billion to $1.7 billion in the latest Budget.

But the obvious question raised by Labour’s comparatively stringent $1 billion a year allowance for as-yet-uncommitted spending is how a Labour-led Government could accommodate fiscally expensive policies from its potential coalition or support partners, the Greens and New Zealand First.

The Greens have yet to deliver a full set of fiscals and New Zealand First tends not to quantify its promises – perhaps mindful, as Winston Peters uniquely is, of how little of them survive the Government-forming negotiation process.

But for example the families package the Greens announced last Sunday put the cost of lifting the main benefits by 20 per cent and reducing the poverty-trapping abatement rates attached to them at around $900 million a year.

On the other hand their proposed changes to Working for Families tax credits would cost about $250 million a year less than Labour’s.

The Greens also propose a new top tax rate of 40c in the dollar on income above $150,000, about three-quarters of which would be required to lower the rate on the first $14,000 of income, resulting in a net revenue yield of around $200 million.

In New Zealand First’s case one policy they have put a price tag on is dropping the GST on food. Estimated cost $3 billion a year.

In the end the fiscal capacity for Labour to accommodate other parties’ fiscal bottom lines (whatever they might turn out to be) lies not in the operating allowance, but in the Budget Responsibility Rules agreed with the Greens.

One of those rules notes that for the last 20 years, core Crown spending has been around 30 per cent of GDP. “We will manage our expenditure carefully to continue this trend.”

The spending track in the alternative budget for the next three years averages 28.6 per cent of GDP. The difference between that and a 30 per cent of GDP cap would be about $4 billion a year. So there is a bit of fiscal headroom there.

All of these forecasts could be rendered moot if the economy is sideswiped by a shock either from the other 99.8 per cent of the world economy or from Mother Nature.

The Treasury’s forecasts inevitably rest on assumptions which surround them with a margin of forecast error.

For example it aims to get its forecasts of tax revenue one year ahead accurate to within plus or minus 3 per cent, so when it forecasts a tax take of $77.4 billion for the financial year which has just begun, it is plus or minus $2.3 billion.

But it sketches an alternative scenario in which it remains around its current level of 70,000 per annum through to the end of the forecast period in June 2021.That would generate $6.8 billion more tax than the central forecast.

The Budget also assumes labour productivity (output per hour worked) will improve by an average 1.4 per cent in the three years to June 2021. That would be in line with the average over the past 20 years, but significantly better than the past 10 years when labour productivity growth averaged 0.9 per cent a year. Who can say which is the more relevant trend?

*Brian Fallow is a former long serving economics editor at The NZ Herald. This is the latest article in an election year issues-based analytical series on economic policies he's writing for interest.co.nz.

Grant Robertson is an interesting fish. Never trained in economics or finances. He's learnt it all "on the job" as a career pollie. Personally, I would prefer to see that the guy would have some powerful philosophical position about public spending to show that he had real vision. For example, if he took an MMT position to explain how public spending could benefit the general welfare of NZers. Something really bold like saying "deficits don't matter." All it seems he as possibly learnt is language of tinkering wrapped up in a narrative that he thinks that existing and potential Labor supporters may subscribe to.

Yes, to some degree, you're right.

I like Winnie's proposal to scrap GST on food. It's something you need to live. Paying 15% tax on a loaf of bread or a 2L of milk is barbaric. All NZers will benefit from that policy.

Good policy in theory, bad in practice I fear.

That's going to require cartel-like behaviour and would result in them being vulnerable to legal ramifications, and - more importantly - to increased competition from smaller and alternative suppliers. (As an aside, it would be good to see Aldi arrive here in NZ.)

National's tax increases (broken promises) via GST and taking a slice out of employer Kiwisaver contributions have been highly regressive and only lumped more burden onto those who can bear it the least.

Yeah the competition is working real good, I love paying more than twice the amount for NZ milk than other countries do...

Did you just essentially choose Fonterra as an example of competition in NZ?

And what constitutes food? A moro bar? A can of coke? A can of beer? A packet of smokes? Edible underwear?
Instead of having exclusions for food and essentials, why not have a tax free threshold which would cover them - it would be much simpler.

Exactly what happens when the Government increases the accommodation supplement.
Landlords all put up the rent by that amount. Tenants don't benefit.
The same with removing GST from food.
It all ends up as a subsidy to the supermarkets. Consumers will not benefit.

The Wizened One's proposal to scrap GST on food instantly foobars what is currently (currantly?) a nice simple ad-valorem tax. Some obvious results:

Agree. Most think you just remove the gst at checkout. They forget about all the adjustments to be made to the input side. All it would do is increase compliance costs and deliver bugga all savings to anyone.

But WP is probably doing a Trump...talk a whole lot of c##p never implement. Expect more of same.

Exactly , I have to strongly agree --- WP is very good at that - all theory and good to have , scarce on details or implementation ...stir the pot or dangle a carrot that he knows very well is unachievable and no one will side with him on it when in Gov... all he does is just create a talking point ''' ... he is full of it and can only fool the naive people with narrow horizon who give him the time of day

Well it works in other countries and like many have said they key to maintaining prices is competition. No doubt there are problems to overcome with implementation but you have that with any fiscal policy changes.

Grant Robertson has a very doggy charisma and bullyish attitude which makes people uncomfortable ... Most of his policies sound like being worked out on the back of an envelope of cardboard box ... he is very TAX prone person , and I have the feeling that he wants to drive NZ into a very social state ...! That may appeal to a lot of his audience and Mates but not sure if that is the way to flip a rising economy ...
Joyce seems and sounds more confidant, logical and convincing ... I believe that he will do a good job going forward if elected again.