The Reserve Bank says 21% of all housing loans are now interest only, while the wage subsidy saw household deposits boosted by over $4.5 billion

Property
The Reserve Bank says 21% of all housing loans are now interest only, while the wage subsidy saw household deposits boosted by over $4.5 billion 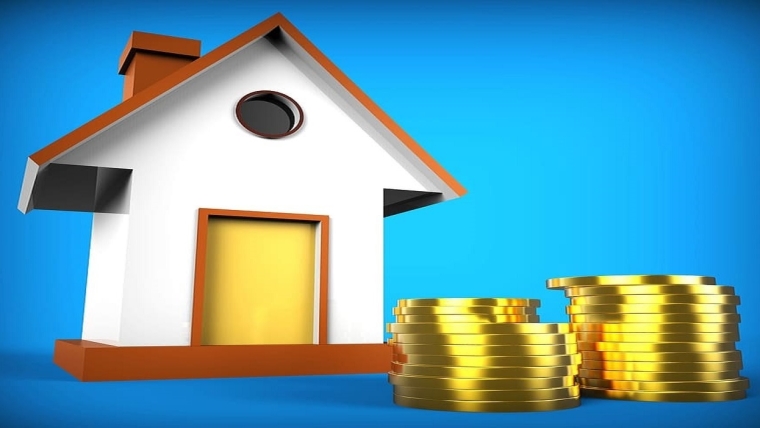 The big wave of stimulatory economic measures has had a huge impact on March lending and deposit figures released by the Reserve Bank on Thursday.

The RBNZ says as at end March 2020, 21% of all housing loans were on interest only. That involves billions of dollars of loans and is up from 19% at the end of February.

The detail on the housing and business loan terms can be seen here.

That's the debt side.

The RBNZ says wage subsidies provided by the NZ government have "significantly boosted" both household and non-financial business deposits.

In fact total deposits with the banks lifted by over $13 billion in the month to $378.9 billion. Among business sectors one of the larger numerical increases was the construction industry, which saw deposits rise by over $1 billion. Deposits by industry detail can be seen here.

Household deposits climbed by over $4.5 billion in the month to just over $189 billion.

This meant the annual growth in these deposits surged to 6.2%, the highest rate since December 2018 and up from an annual rate of just 4.3% a month earlier.

Given this, perhaps not surprisingly total annual consumer lending growth for banks and non-bank lending institutions (NBLIs) fell to -3.6%.

The decline was largely driven by a fall of $380 million in credit card lending for banks.

Annual growth in total mortgage borrowing slowed slightly from 7.2% to 7.1%. 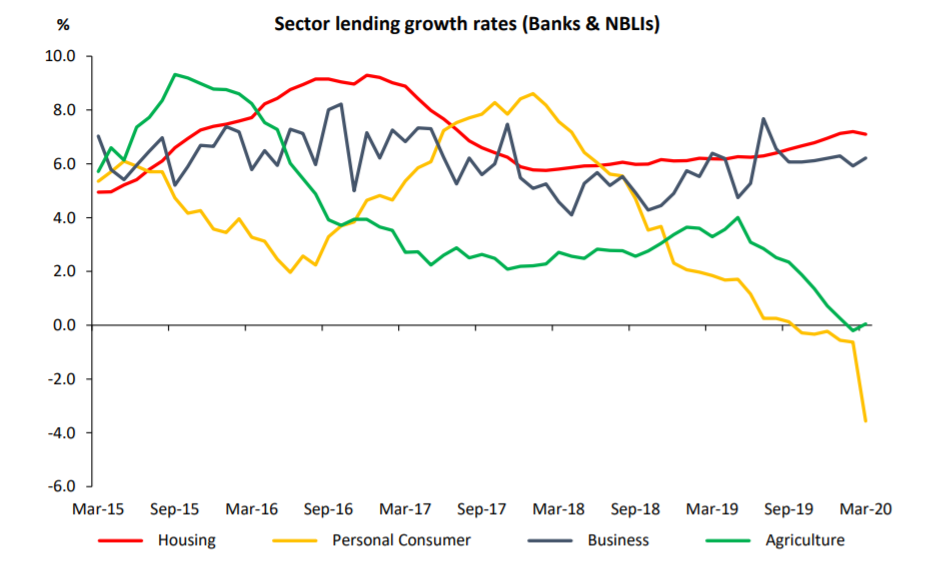 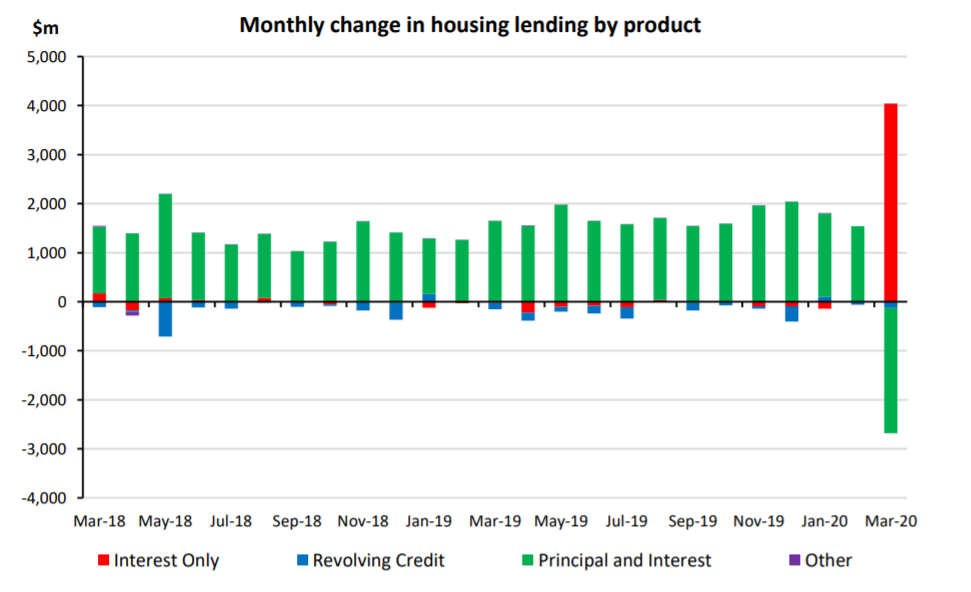 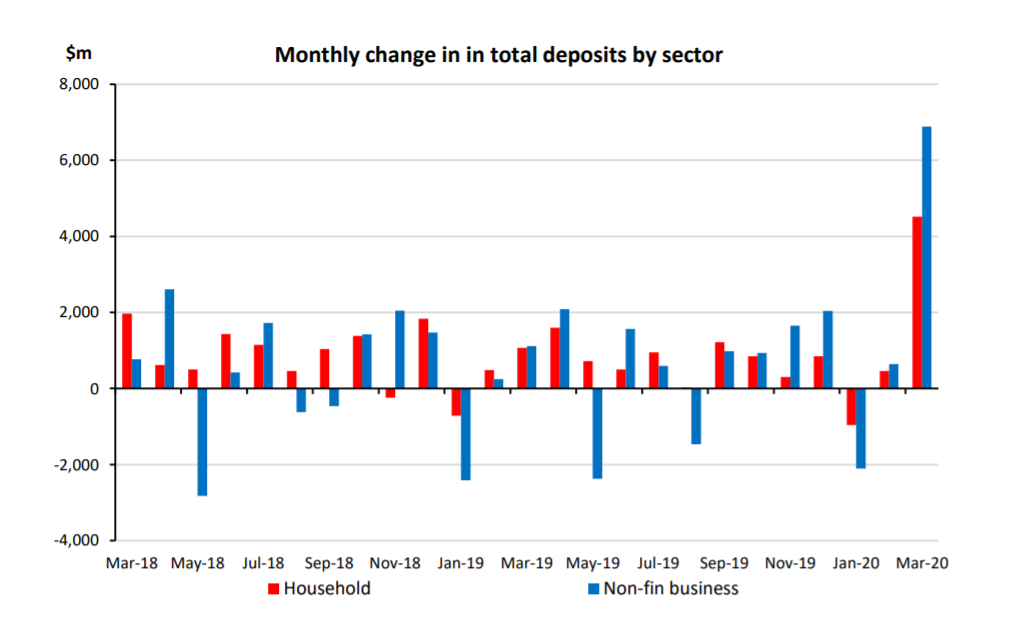 Too many people thought that interest only was a risk free pass to financial success. They will now be finding out it wasn't.

Some portions of society have been set up to cause high risk financial decisions to be very low consequence. I probably shouldn't have bought an investment property interest only at 23 barely making $15/hour, but it was my only means of taking a bite into a housing market that looked like I would never be able to buy even a shack where my roots were.
If I would have defaulted and been declared bankrupt I would have ended up with a networth gain financially up until only 3 years ago as my student loan debt would have been wiped and my negative equity taken with it.
These days having finally surpassed that there is a negative consequence to not having a loan size that could cause me issues and recent events have led me to very quickly pay down more than my table loans would have done for me back when I bought the place (and the cash flow would have been impossible).
Risk free? Never thought that. But was the risk worth it? Yes.
Even pre-Covid, comparable properties in the village where I grew up are on average 2-3x the cost of my investment property. And a fall of 30% in house values will bring that spread together and my hope to finally buy a measly little place in my home town that much closer. We can all dream of buying and making our own a little home somewhere near to our loved ones, family friends and support networks. Or even within that region to at least access them on a regular basis without the insecurity of renting. For now infrequent visits will have to do.

Do the figures differentiate between being on a payment holiday (capitalising the interest to the balance), and making interest only payments? or are they treated as the same thing?

Whichever, it screams...household housing debt stress, because I'm not sure anyone with surplus funds ( the jump in Household Bank Deposits) would qualify to go onto Interest-Only otherwise.

Yes, the "monthly-change lending by product" graph says it all!

Going interest only saves people from expensively paying interest on interest, rather going six months deferred or mortgage holiday during this uncertain times. This always depends on one’s personal situation.

From what I hear (a couple of people in bank leading) they prefer customers going interest only rather both principal and interest deferment. For those who have had a 20% wage cut this provides an appropriate level of relief provided they are some years into their loan period. For those who have fairly recently taken mortgages out the principal component is very small so somewhat problematic. To all those under pressure I wish them well and no doubt are cutting back severely on discretionary spending. The four weeks of lockdown Level 4 was a good indicator of savings on cutting out discretionary spending.

Why is it that business lending is on interest only terms so frequently? I'd have thought it was intrinsically higher risk than mortgage lending.

I can see why banks wouldn't be keen on unsecured lending (credit cards, personal loans etc.) for a couple of years. Easy corner to cut costs from.

My guess is revolving credit facilities secured against the owners house.

Government wage subsidy was paid up front for 12 weeks.
So, the boost to deposits is less than meets eye. It will be being drawn on for income substitution for 3m

Always thought those on interest only was about 25% anyway, way to high. All well and good when property prices double every 10 years but that just ended rather abruptly. Prices are now falling and its going to take years to recover to values before this Pandemic.

"property prices double every 10 years but that just ended"

Really? You must have some great insider information, please do share

The government deficit is the non-govt sector's surplus. The govt spending was to businesses for their employees, and it has ended up in business and household bank accounts. A beautiful demonstration of stock-flow consistent sectoral balance accounting. All part of the modern monetary theory view of the macroeconomy.

Major economic disruptions have a perverse effect that turns things upside down, for example :-

Still cheaper than renting a house of that value .

Its a perverse incentive to hock yourself to the eyeballs