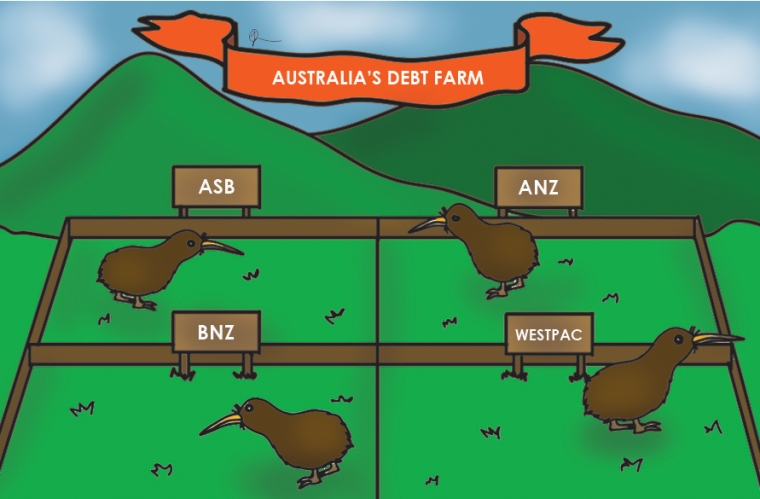 Federated Farmers says it has no relationship with bank lobby group the New Zealand Bankers' Association (NZBA) beyond keeping in touch on issues as it would with other stakeholder organisations.

The comment comes after the farmer advocate quoted NZBA's CEO warning of the perceived costs to the economy of the Reserve Bank's proposals to increase bank capital requirements in a press release on its latest biannual banking survey.

The Federated Farmers press release has NZBA CEO Roger Beaumont saying NZBA analysis shows the Reserve Bank’s proposal to "almost double" capital requirements will have a net cost to the New Zealand economy of $1.8 billion a year. "Depending on individual banks’ commercial decisions, it’s fair to say there’s likely to be an impact on customers," Beaumont adds.

Speaking at a press conference last week Reserve Bank Governor Adrian Orr said he didn't agree with the NZBA analysis, saying; "There are a lot of interesting assumptions across a lot of the submissions, particularly from those who are the ones who may be facing higher capital requirements."

Interest.co.nz asked Federated Farmers about its relationship with NZBA. We suggested that, in particular, it seemed odd to quote the CEO of NZBA, a group whose members have a big vested interest in the outcome of the Reserve Bank review of bank capital requirements, in a Federated Farmers press release that was primarily about farmer satisfaction with their banks.

In comments attributed to its vice president and commerce and trade spokesperson Andrew Hoggard, Federated Farmers says in every banking survey press release issued since the survey started in 2015 it has included a comment from NZBA.

"That’s to ensure balance and a right of reply. So to include one this time is not at all unusual," Hoggard says.

"Federated Farmers and the NZBA are two independent industry organisations. There is no relationship beyond keeping in touch on issues just as we would with other stakeholder organisations on other issues."

Hoggard says he's not aware that NZBA, nor any of its bank members have membership of Federated Farmers in any capacity. And nor do any banks currently have any sponsorship arrangements with Federated Farmers. Business lobby group BusinessNZ recently issued a press release and submission on the Reserve Bank capital proposals closely aligned with the stance of New Zealand's four Australian owned banks towards their regulator's proposals. BusinessNZ CEO Kirk Hope acknowledged the four - ANZ, ASB, BNZ and Westpac - are BusinessNZ members, and says BusinessNZ is concerned the Reserve Bank proposals will push up borrowing costs for business borrowers.

Federated Farmers' submission on the Reserve Bank's capital proposals recommends three key changes. Firstly, that the Reserve Bank adopts a once every 100 years bank failure tolerance rather than a once every 200 years approach. Secondly, it calls for a robust and independent cost-benefit analysis. And thirdly, it suggests the transitional period, which the Reserve Bank has suggested be five years, allow for a more measured, gradual pace of change, which Federated Farmers suggests would ease the costs of getting to the desired new levels of bank capital.

In terms of extending the timeframe for introducing new bank capital requirements, Hoggard suggests up to 10 years.

In terms of shifting to a once in 100 years bank failure tolerance, Hoggard says this might "knock 2-3 percentage points off" the amount of bank capital required.

"It would stand to reason that taking such an approach would make the pace of adjustment easier and thereby reduce the impact on the cost of credit and credit conditions and that this would be better for borrowers and savers and the economy as a whole. We would like the Reserve Bank to model what the two approaches would mean when it does its cost-benefit analysis," says Hoggard.

The Reserve Bank's capital proposals make the explicit assumption that New Zealand is not prepared to tolerate a system-wide banking crisis more than once every 200 years.

Hoggard says farmers have contacted Federated Farmers expressing concern about "the noises" they have heard from banks and concern also came through in comments in its banking survey.

"It is certainly concerning that banks seem to be acting prematurely on what are proposals for consultation. The financial impact on farmers will depend on how much debt they hold and their risk profiles, but some have told us that for a 100 basis point increase in interest rates it would cost them $100,000+ in higher interest costs per year. Overall, a 100 basis point increase would cost agriculture around $630 million [annually], based on agricultural sector debt of almost $63 billion," says Hoggard.

"We have heard from some banking sources that for some farmers the cost impact from proposed bank capital requirements could be up to 200 basis points. Hence our concern about both the Reserve Bank’s proposals and the banks’ apparent reaction."

Interest.co.nz also asked whether Federated Farmers feels interest rates farmers are paying are reasonable given the record low Official Cash Rate of 1.50%, annual bank funding costs of just 2.69% according to KPMG, and record bank profits including returns of equity among the big banks of more than 16%.

"Those are averages and we aware of some farmers who pay less than 4% on their mortgages, while of course some will be paying a lot more than the average. It is also probably fair to say that some farmers will be on fixed rates that are higher than they would be if they floated or were fixing today."

"We would certainly agree that banks are very profitable and they should look to absorb at least some of the cost increases coming to them. However, we are not convinced though that the Reserve Bank’s assumption that there should only a minimal cost increase will be borne out in practice, hence our wish they do a robust cost-benefit analysis, including on sectors such as ours."

The Reserve Bank proposals announced in December would see NZ banks - led by ANZ, ASB, BNZ and Westpac - required to bolster their capital by about $20 billion over a minimum of five years. For background and detail on the proposals and bank capital in general, and the nuts and bolts of what's proposed, see our three part series here, here and here.  Additionally the Reserve Bank proposes to designate the big four as systemically important banks meaning they'd have capital requirements above and beyond other banks.

The deadline for submissions on the capital proposals was May 17, and the Reserve Bank says an announcement is planned by the end of November, with implementation of any new capital requirements starting from April next year.

'Wreckless' borrowers want protection at the cost of depositors savings.

The big banks are doing a great job of scaremongering.
FF are just repeating the fears of some of their membership who, already, under financial pressure are being individually frightened.
Interestingly - by the FF's own analysis interest rates have fallen by more than 100 points over the past 4 years - so worst case scenario - rates are back to where they were four years ago.
The real question is.
If one percent makes all the difference just how scarily vulnerable are farmers' finances.
And simple maths says a $100,000 increase means a $10 million mortgage - not your average farmer.

The cost of land in this country is way above what most people think is appropriate. Sure, we're small & there's not much of us, but the double-dipping expectation days by a lot of farmers is coming to a close. That model is already under pressure & any downturn will expose the false narrative underwriting their theoretical economies. Okay, a lot of good young farmers may go to the wall in an industry that is crying out for new blood, however, the reality (always) is there is very little room for a small nation like us to always protect our key producers. Sometimes shit happens that is beyond our control. Sometimes Labour govts create their own shit (remember SMP's). [Yes, I know there's more to that than meets the eye, but hey, life goes on. Right?]

The additional capital interest rate effect is oversold. The ocr will continue ease and stay much lower as higher bank rates will lead to lower economic activity unless there is a lower ocr . Grey power should be submitting on behalf of the bankers assn as TD interest rates will move lower. Also expect to see a bank earnings increase result.