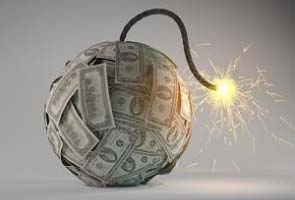 BNZ economists have come out questioning whether we’re “borrowing our way to recession”, saying the likelihood of New Zealand falling into recession is increasing every day.

The statement follows ANZ’s Business Opinion Survey, revealing business confidence hit a six-year low in August, and the latest Reserve Bank sector credit figures. They show New Zealand households borrowing at their fastest rate in seven and a half years.

ANZ says, “A net 29% of businesses are pessimistic about the general economy, the fifth consecutive monthly decline.

“For the second consecutive month, general business sentiment was in negative territory across all five sub-sectors. Agriculture was by far the most pessimistic, whilst construction and services are the least downbeat.”

BNZ’s head of research Stephen Toplis says, “The really worrying perspective, however, is that if the general tenor of the [ANZ] survey deteriorates any further, which seems entirely plausible, then our expectations will start to look decidedly optimistic.

“The majority of indicators in the August survey reverted to levels last seen as the New Zealand economy climbed out of its post Global Financial Crisis recession in mid-2009.

“Not surprisingly, the agriculture sector (read dairy) is in a state of depression but every other sector surveyed now also has below-average expectations for activity growth.

“The only sector within cooey of optimism was services which is likely to largely reflect the booming state of the housing market and those who can benefit from such.”

Toplis' comments come after he said in early July it wasn't hard to envisage a scenario where recession became imminent.

GDP growth expected to fall to 1.7%

BNZ’s gloomy comments also come a week after the bank lowered its annual gross domestic product (GDP) forecast to 1.7%, “to cater for an expected drop in export volumes associated with lower dairy production”. GDP growth is currently at 3%.

BNZ appears as downbeat on the economy as Westpac, which is expecting GDP growth to slump to similar levels.

The New Zealand Institute of Economic Research is also expecting GDP growth to dip close to 2% by the end of the year, before rebounding over 2016.

Toplis expects the unemployment rate to climb to 6.5% by mid next year. It's currently at 5.9%. He believes labour force growth spurred by strong migration, won’t be met by the same level of job growth.

The Reserve Bank has taken an opposing view towards unemployment, which Toplis maintains will cause it some major headaches.

BNZ is sticking firm to its view the Official Cash Rate will be cut at least two more times from where it is at now at 3.0%. It also sees the dollar heading lower.

Toplis says pricing intentions haven’t risen as he had thought, with the NZ dollar pushing up import prices.

“The net number of businesses expecting to raise prices fell to 16.3 from 22.0 last month and inflation expectations dropped to 1.68% from 1.70%.

“The level of these indicators will not have us scurrying to lower our own short term inflation forecasts, which are already very low, but they do indicate just how weak pricing pressure is at the moment.”

How much $ s have you on deposit at said bank?

And what you haven't mentioned MB is the Government and its borrowing and it is that debt the SME's have to generate enough income to pay for......so don't go worrying about the debt dairy farmers and anyone else in private enterprise has......it's Governments spending and debt that shags the economy.......and when any business is running an eye over their bank statements......there is an enormous amount of money leaving every month to fund some bureaucratic entity....

The biggest open door policy is the one at the back door which makes all business fund other people's spending!!

That's quite alright, because we used the last boom to build up new competitive ... ummm ... anyways, Krugman and Hickey will argue that money printing is definitely the best recipe for disaster going forward.

A weaker dollar will work wonders for our biggest export, Auckland residential property.

Most of these immigrants appear to be "students". I doubt many of them end up in professional jobs, it's just a path to residency.

Yip with free money because they can't find work, free health, free housing and free education for the extended family. Nice... middle class tax payers are going to love the next tax increase, or do we just print and borrow?

where are these free money, free housing and free education exactly?

The surprising aspect revealed by Michael Reddell's research is the topmost segment of skilled professionals migrating to New Zealand are Engineering Professionals .. wonder what industries they are ... heading towards ... heading into .. I don't see nz as a highly industrialised manufacturing destination

I have been in a lot of taxis with immigrant engineers driving them who cant get work due to language/unrecognised quals/no local experience etc...

Indians tend to be brought up to think being an Engineer is the great occupation, like Lawyers or Doctors in US. Many of them study hard to please family and because that's what is expected of them - then find once they've done the quals that either they can't get a job or they hate it (and the crap that surrounds it over there).

an indian friend of mine qualified in our industry with me, about 5 years later took a couple of years off to do a MBA to help move up the ladder, he tried to talk me into it and I said no waste of time. 5 years on hes back same level and reliazing what I told him about its who you know not what you know that gets you to the top and so now he is headed down the path of net working. He commented to me the other day abou how hard it is to get up there being indian and from overseas.
and this in an industry made up of over 50% from overseas, if you are not an anglo male with the right friends forget it

And if a white guy turns up in India how much chance has he got actually getting work never mind running an Indian company.

its not specific to indian or Asian, if you are not anglo or a woman your chances are very very unlikely. and I have worked with many that would have done the role on a canter but been overlooked to put in place someone less capable.
one company I worked for was german and unless you had german roots you would not make MD instead they would fly one in who would be on his bike within a year or two ( happened three times in a row).

Borrowing to prosperity. Sure to work.

Did you see the movie "Here comes the boom?"

if the banks here were controlled by nz'ers, owned by nzer's and the dividend and revenue flows went back to nzers then the argument is largely irrelevant. the fact that this isn't the case and our banks are largely owned and funded offshore is the issue.