Business
Ryan Greenaway-McGrevy says despite its limited scope, the TPPA lays the groundwork to fight some forms of corruption 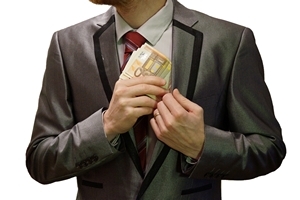 This is the eighteenth in a series of articles Interest.co.nz has commissioned reviewing the key chapters and issues for New Zealand in the Trans-Pacific Partnership Agreement (TPPA). Links to all the analysis in this series are below.

Corruption is bad for trade. Palms that need greasing act like taxes. But whereas taxes can end up in hospitals, schools or other public services, graft and other forms of corruption end up lining the pockets of public officials. And when the politically connected are sheltered from competition, they can extract exorbitant profits.

Worst of all, corruption can exacerbate poverty.

It is not surprising then that transparency and corruption are receiving more attention in international trade and investment.

Chapter twenty-six of the TPPA is devoted to encouraging transparency and cracking down on corruption.

Transparency is a key theme of the TPPA. The agreement often permits the use of trade-related policy to achieve specific public policy goals under certain conditions – provided that policy-makers are open and transparent with their policy objectives.

Section B of chapter twenty-six outlines the standards and principles for the entire agreement. Article 26.2 (Publication) requires that Parties publish the laws, regulations and administrative rulings covered by the Agreement; give fair warning of any proposed changes to these regulations; and allow interested parties to comment on the proposed changes.

Article 26.3 (Administrative Proceedings) requires that any administrative proceedings initiated to apply or interpret these laws and regulations are publicised. Members of other Parties that may be affected are to be notified and provided with a reasonable opportunity to submit facts and arguments to the proceedings.

Article 26.4 (Review and Appeal) requires each Party to establish or maintain independent tribunals so that the outcome of any administrative proceedings can be reviewed or appealed. These tribunals are to operate within the domestic laws of the Party.

Article 26.5 (Provision of Information) states that if a Party believes that a proposed or actual measure may affect another Party’s interests under the Agreement, it must take practical steps to inform them and provide any requested information.

Article 26.7 (Measures to Combat Corruption) obliges each country to establish the following as a criminal offence and provide for “effective and dissuasive sanctions” for those found liable: Bribing an official; accepting a bribe; or aiding and abetting either of these offences. The paragraph also lists a number of accounting practices which should be legislated against such as “off-the-books accounts” and falsification of records. It also includes a whistle-blower protection clause.

Article 26.8 (Promoting Integrity among Public Officials) encourages each Party to adopt preventative measures such as: rotation of staff in positions vulnerable to corruption; a code of conduct for public employees including disclosure of conflicts of interest; and ways to promote the integrity of the judicial system. It also calls for the establishment of disciplinary procedures to address any code of conduct breaches.

Article 26.9 (Application and Enforcement of Anti-Corruption Laws) requires Parties to enforce their anti-corruption laws, but still grants them sufficient flexibility to decide the best method for doing so. The clause is, however, exempted from dispute settlement, meaning that the trade agreement cannot be used to enforce it. If a government does not enforce its anti-corruption laws it does not face the prospect of trade sanctions from its TPP trading partners.

The chapter incorporates many existing guidelines and conventions on corruption. Article 26.6 (Scope) states that the Parties re-affirm their commitment to Asia-Pacific Economic Cooperation (APEC) codes of conduct for public officials and private enterprise; it also requires each Party to ratify or accede to the United Nations Convention against Corruption. (Japan is the only TPP nation yet to ratify this agreement. NZ finally ratified it late last year, some 12 years after signing it).

The TPPA is by no means a panacea for corruption. Its remit is limited to activities covered under the agreement – international trade and investment. And it won’t do anything about the uncomfortably close relationships between political donors and politicians both here and abroad. But despite its limited scope, the agreement does lay the groundwork to fight some forms of corruption.

Consider government procurement – one of the primary ways public officials can redirect public money to their family or cronies.

The government procurement chapter of the TPPA requires a fair and transparent bidding process for central government contracts. This includes well-publicised criteria for how the contracts will be awarded – which makes it more difficult for officials to give extravagant contracts to their mates. More importantly, alleged infractions are subject to the state-to- state dispute settlement process, meaning that doling out government contracts to cronies ultimately threatens the country’s trade benefits.

But there would still be a few hurdles to overcome for the agreement to be really effective in the fight against corruption.

First, for many nations (including New Zealand, the USA and Vietnam), the sub-central government is exempt from the procurement chapter, meaning that there would be little additional pressure for local officials to curb corruption. This could, however, change: under Article 15.24, the government procurement chapter is to be renegotiated no later than three years after the TPPA comes into effect. Reducing the exemptions is listed on the agenda – meaning that the agreement could feasibly be extended to sub-central levels of government too.

Second, initiating a state-to- state dispute over alleged corruption requires political will, and often such disputes are part of the broader geopolitical relationship between two nations. If a government raises a dispute with a trading partner, there is likely to be blow-back.

Still, the transparency and anti-corruption chapter is a step in the right direction – because it ties the benefits of trade to addressing the problem. And the developing nations that are expected to gain the most from the TPPA also happen to be the ones that rank poorly in international measures of corruption and transparency. Any additional impetus to do something about the problem should be welcomed.

Yeah right!
Maybe in the academic world the TPPA will be a venue for fighting corruption, but in academia there is little difference between theory and practice, and we the people know the difference, don't we?
New Zealand is perhaps the least corrupted nation on earth, certainly it is one of the few least corrupted nations in the OECD. Yet, the USA has not been in that category for a few decades now. Especially after the War on Terror and after they invaded Iraq illegally, under the pretexts of WMD's and introducing democracy and freedom, which they have peddled for over a century in LatAm, and where the people by experience are reluctant to believe in the good intentions of the biggest empire to ever exist in the face of the earth.
Further, both candidates for president in the USA are against the TPPA, as are the people of the USA. As a matter of fact, protectionist sentiment world wide is at an all time high. The Brexit vote being a case in point, and the EU erecting barriers between member nations to ward off immigration is another. And yet, in the least populated nation on earth some believe in the virtues of a doctrine that has rendered other nations unlivable.
I agree with Northland Hippie, close the doors to immigration and reject globalization efforts of over populated nations trying to secure a foothold in this sanctuary of the South Pacific. We should not allow our population to grow beyond the natural rate of growth, regardless of what the talking heads tell us. Perhaps they should move elsewhere and establish all their treaties (scams!) between themselves.
Immigration should be curtailed and the TPPA not ratified!
Vote for #JKEXIT, and all his United Statian cronies!!

And yet the TPPA was the impetus for NZ to ratify the UN convention against corruption. Sounds like theory turning into practice to me.

What took us so long? Maybe we are not as clean as we think we are. In case you haven't been paying attention, our Politicians have been doing a lot of favours lately. And then there is the whole NZ international tax haven debacle.

Neither Trump nor Clinton have any appetite for the TPPA , so its dead in the water

But remember what JK just said, something like: politicians say anything to get elected, then do the opposite, e.g. "no rise in GST and we'll fix the housing crisis."

stop talking about TPPA, it is never ever going to happen and imagine how much money has been wasted on officials over the years flying all round the place imagining they are going to get this through. Now we have some idiot saying it can proceed without the US...its no a free trade deal thats for real...

It will. These negotiations always get completed in the end. True they take much longer than everyone expects, but few big trade deals ever "just wither and die" and the TPPA won't be one to do that. Just need to get the US election gamesmanship behind us.

Its a security blanket dressed up as a trade deal. For that reason it wil happen

"The TPP is a strategic agreement between the United States, Vietnam, Malaysia, Singapore, Brunei, Mexico, Peru, Chile, Canada, Australia, NZ, and Japan. There is no Soviet threat, and no Russian participation in the TPP. Also missing from the TPP is China, the second largest economy in the world, and it’s absence reflects the TPP’s move away from its originally designed FTAAP. For the US, China’s rise is perceived as a threat to its global economic hegemony, and unless the US is able to contain China’s economy, the TPP serves as a kind of China containment strategy".