Roger J Kerr explains why the NZD is falling against the AUD and why this might have some way to go yet, over coming weeks

Currencies / opinion
Roger J Kerr explains why the NZD is falling against the AUD and why this might have some way to go yet, over coming weeks 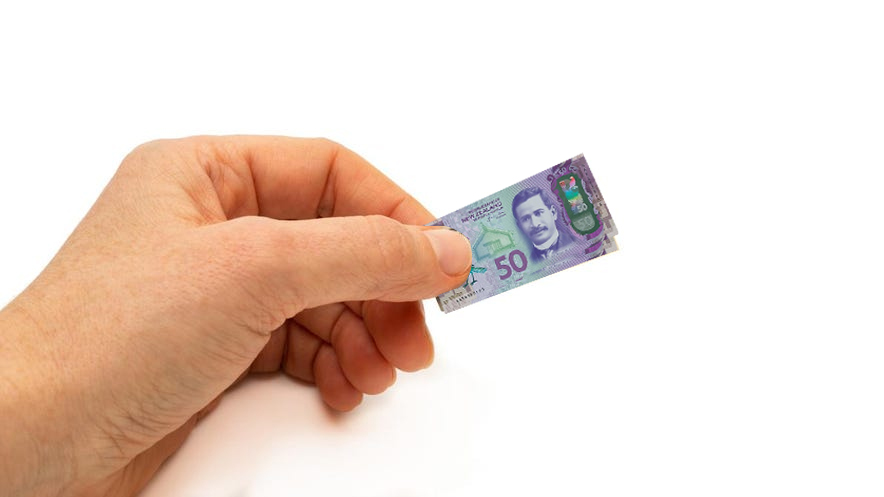 Inflation is devaluing our dollar

Picking the timing on when US equity markets would correct downwards on rising US interest rates was always going to be nigh impossible. Retail share investors, wholesale share investors, fund managers, stockbrokers and the investment banks that feed the new listings were all in total denial for quite a long time after inflation started to ramp upwards in early 2021.

The inflation watchdog, the US Federal Reserve was also in denial about inflation for much of 2021 as they stubbornly stuck to their view that the price increases were only temporary (“transitory” being their favoured description). A late and abrupt realisation that inflation was much more permanent caused the Fed to change their monetary policy stance to a decidedly more hawkish position in mid-December. It was if the equity markets needed to be officially told by the central bank that interest rates were definitely going up in 2022 and 2023 before they switched their investment strategy from buy to sell.

They clearly did not work out the inevitable from the inflation signs themselves. The US bond markets was also just as guilty at being in denial, as is evidenced by the rapid increase in 10-year Treasury Bond yields from 1.50% to highs of 1.90% last week.

The sharp increase in long-term interest rates detrimentally impacts on enterprise valuations, in particular the large technology stocks who have been slammed hard from arguably over-hyped valuations previously.

Cryptocurrency values have also been pummelled down over this last week, another sign that speculative investors across the board have been found out, just like the Emperor was found to have no clothes on when the tide went out.

The US interest rate markets are now pricing-in four 0.25% increase from the Fed this year, commencing in March. In late December the forward pricing was for three 0.25% increases starting in June. The interest rate markets may have got ahead of themselves in expecting the Fed to lift rates earlier and harder. We will get a read on the Fed’s monetary policy tightening timing later this week when they meet on Thursday morning (NZT).

The markets are factoring-in that the Fed has achieved their full employment objective with the US unemployment rate now at 3.90%. However, other measures of the US labour market such as the participation rate (numbers working and seeking work) indicate that there is still a way to go on reaching the full employment objective. The last two months’ Non-Farm Payroll jobs increases (November and December) have been well below prior forecasts and jobless claims (unemployment benefit applications) have been higher than expected over recent weeks. Therefore, the equity markets may be in for a reprieve later this week when the Fed fails to endorse the more aggressive interest rate increase track priced by the markets.

The “risk-off” investment market sentiment last week hurt the Kiwi dollar as it could not hold the gains to above 0.6800 and tested the strong support level of 0.6700. A major downwards equity market correction was always the risk we cited to our view and forecast that the NZD/USD rate would hold above 0.6700 and return to rates above 0.7000 on a weaker USD in global FX markets. Tellingly, the US dollar itself has been unable to strengthen on the back of higher US interest rates and on safe-haven USD buying on tumbling equity markets.

The FX markets are behaving as expected, with the USD gains against all currencies from March to November last year fully pricing-in, in advance, the Fed’s tighter policy and impending interest rate increases.

Recent changes to speculative FX market positioning on the US dollar confirms our view that the USD has ended its stronger trend and is now set to weaken over coming months.

Net long USD speculative positions (expecting the USD to strengthen) measured by the CFTC are at their lowest level since September 2021 with long positions slashed from US$19.3 billion to US$12.7 billion last week. Further USD selling should be anticipated this week if the Fed go slower than the markets on interest rate increases.

The gains by the Euro against the USD to $1.1350 also perhaps suggest that European investors are ditching out of plunging US equities and are returning their funds home i.e. buying EUR, selling USD.

Many US fund managers are now reporting that they are reducing their weightings of USD currency holding as they buy into the outlook for 2022 that the USD value has already baked-in the interest rate increases and from here the FX markets will turn to the more negative US economic factors (e.g. large internal Government budget deficits and large external Balance of Payments Current A/c deficits).

The net result of these global market changes and resulting capital flows is that the NZD/USD exchange rate should hold above 0.6700 (currently 0.6720) and climb back to 0.6800 and 0.6900 as the USD weakens further and the Australian dollar (which we follow) is a major beneficiary of funds exiting the USD.

Just how Australia has managed to record an annual inflation rate (currently 3.00%) well below the 4.9% in New Zealand and 7.00% in the US is something of a mystery.

They have experienced the same oil price, commodity price and freight/shipping cost increases as NZ and the US over the last 12 months. It is not as if the Australian economy has considerably higher levels of competition across the industry sectors that produces the lower inflation outcome.

Perhaps the difference is just timing, and we are about to see a big catch-up with Australian inflation numbers.

The Australian non-tradable inflation rate (domestic prices) is however much lower than the constant price increases we suffer in New Zealand from the Government sector and non-competitive parts of the economy. The lower inflation to date is the main reason the Reserve Bank of Australia has maintained their outlier stance of not increasing interest rates until late 2023.

Consensus forecasts for Australia’s December quarter inflation increase, due for release on Tuesday 25 January, are for a 1.00% increase, marginally increasing their annual inflation rate to 3.20%. An outcome above that will send the Aussie dollar up.

New Zealand’s December quarters’ inflation data is released on Thursday 27 January with a 1.20% increase for the quarter forecast, lifting the annual rate to 5.60%. A result in line with expectations should be positive for the Kiwi dollar on the day as it will confirm to the markets that the RBNZ need to tighten monetary policy aggressively.

However, once the inflation increase peaks in New Zealand you do wonder how the RBNZ will react to gathering evidence of a slowing economy, weaker housing market and weak business/consumer confidence levels.

In September last year when the NZD/AUD spot rate was trading above 0.9600 we published a special report on the cross-rate, which incorporated a strong view that history would repeat, and the NZD/AUD rate would depreciate back to the 0.9300/0.9200 region. The local banks at the time were expecting the opposite to occur with further NZD gains to perhaps parity with the AUD.

History has indeed repeated with the AUD outperforming the NZD against the USD over recent weeks and the NZD/AUD cross-rate tumbling to 0.9350.

The underlying reason for the NZD under-performance is the fact that the RBNZ started to signal a tightening of monetary policy in November and the RBA have yet to do so. The FX markets had fully priced-in the NZ interest rate increases in advance in September and October (thus the stronger NZD at the time), whereas the AUD market is only doing that now.

The FX markets work months in advance of expected events and that is why the AUD is making gains against the NZD, as the RBA’s change of policy stance is expected and built-in now.

Over the last seven years there has been a constant five cent gap between the AUD/USD exchange rate and the NZD/USD rate. In September 2021 the gap had reduced to just three cents with the AUD/USD spot at 0.7300 and the NZD/USD spot at 0.7000. Today, the differential has moved out again to 4.60 cents with the AUD/USD trading at 0.7180 and the Kiwi at 0.6720. The current 0.9360 NZD/AUD spot rate is likely to move lower again over coming weeks as the RBA are forced to change their rhetoric on the timing of inevitable interest rate increases at the upcoming statement on 4 February. 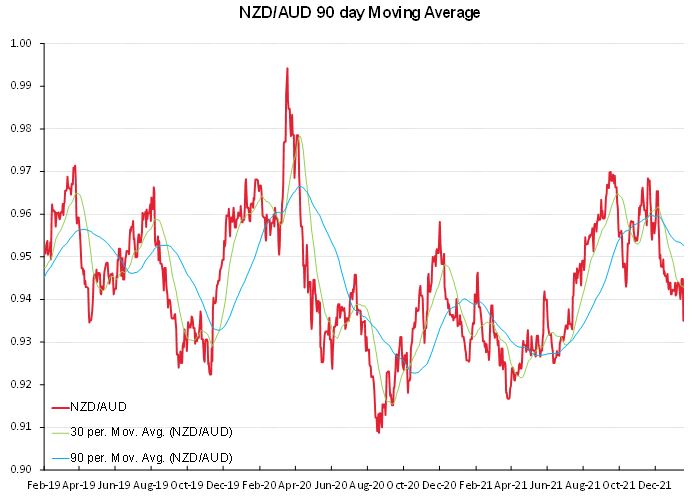 You may be right.

I think there will be more sell-offs on the NZD.

Agreed.  Once overseas investors come to realize how badly the current NZ government is managing the economy, many will stop buying the NZ dollar.

This will cost 10s of $1000s to kiwis moving to Aus this year!
Can the RBNZ hike higher and faster than the RBA and raise the NZD/AUD cross?

Jason Wong NZD pushes back up to 64 USc

Nick Smyth RBNZ expected to raise the OCR by 50bps this week. Market focus on the forecast OCR track