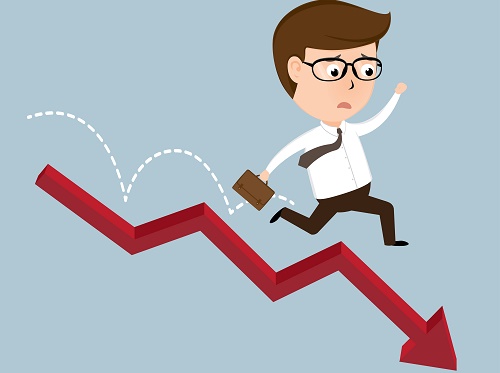 Maybe the local foreign exchange market was already looking for a reason to sell the Kiwi dollar last Thursday 7th February, therefore the employment/wages statistics for the December quarter released that day provided the convenient catalyst to send the NZD/USD rate lower.

Ahead of the softer employment data, the Kiwi had failed to hold above 0.6900 for the second time this year, thus the currency was already in retreat mode.

The surprising and unexpected increase in the unemployment rate to 4.3% (up sharply from the record low of 3.9% in the September quarter - which was subsequently revised up to 4%) provided fuel to argument that a weaker economy would tip the RBNZ into cutting the OCR interest rate sooner rather than later i.e. Kiwi dollar negative.

The dramatic turnaround in the employment trend in late 2018 looks very suspicious to me, as the anecdotal evidence from around the country across industries and business firms is that they all continue to struggle to find enough workers to do the job.

It feels like a “rogue” number and in time my view is that it will be proven that the labour market did not suddenly turn soft in the December quarter.

The evidence in the accompanying quarterly Employment Survey (employers surveyed) and Labour Cost Index numbers is that finally business firms are having to pay higher wages to retain and attract staff.

The supply/demand equation for the labour market remains a shortage of supply. The RBNZ will not read too much into one quarterly increase in the unemployment rate, particularly as the inflationary implications from the 3.1% increase in wages over the last year in the Quarterly Employment Survey cannot be ignored.

The 4.3% unemployment rate comes from the Household Labour Force Survey which is a random survey of 15,000 households that asks if they are in work or not. Stats NZ have made major revisions and adjustments to the December 2018 quarter’s unemployment data, so caution is the word in reacting to this data.

The NZ dollar FX market appears to have over-reacted to this jobs data by selling the Kiwi down to 0.6740.  The recent incomprehensible revisions to New Zealand’s net migration data does not instil confidence that Stats NZ are accurately measuring supply and demand in the labour market.

The net result from these potentially dodgy economic numbers is that the FX market may be somewhat disappointed that the RBNZ is not as bearish on the economy as many expect when the Monetary Policy Statement is released this Wednesday 13th February.

The news has been totally negative for the Aussie dollar over recent weeks, culminating with the Reserve Bank of Australia adjusting their official stance on monetary policy settings from “next move in official interest rates is up” to a “neutral” outlook and revising down their GDP growth and inflation forecasts.

After recovering up to near 0.7300 against the USD a week ago, the Aussie dollar has depreciated to 0.7080. Over the last six months to AUD rate against the USD has found a strong level of buying support around the 0.7050 level (apart from the “flashcrash” on 3 January 2019).

My forward view on the AUD continues to be that all the bad news is now fully priced into the current exchange rate and all the currency speculators who wanted to sell the AUD as a result, have already done so. In other words, the “short-sold” market positioning in the AUD is exhausted and the more likely scenario is buying of AUD’s on profit-taking when it fails to record new lows.

The FX markets have been ignoring the recent increases in gold, iron ore and copper prices that would normally send the AUD exchange rate higher. Iron ore prices have jumped from US$65/MT to US$90/MT following the Vale mine/dam burst in Brazil that reduces global supply and inventory. Global inventory levels have been reducing sharply in many metal and mining commodities that Australia exports.

Ultimately, the resources industries determine Australia’s economic performance and the outlook for their mining sector looks positive. The AUD/USD exchange rate divergence from their commodity prices is not sustainable. For this reason the AUD recovery will drag the Kiwi up from the bottom-end of its trading range at 0.6700/0.6750. The NZD/AUD cross-rate should continue to ease back to 0.9300 as the AUD out-performs the NZD against the USD over coming months.

It would be a very brave person who predicts the UK Brexit outcome over coming weeks in terms of the impact on the GBP exchange rate.

From the current exchange rate of $1.2950 against the USD the Pound could strengthen to $1.4000 if PM Theresa May convinces the EU to adjust the Irish border backstop arrangement, or alternatively the Pound could weaken to $1.2000 if no deal is struck and we have a “hard” Brexit and extensive turmoil come 31 March.

The implications for local exporters in GBP (wine and sheepmeat exporters mainly) is that the NZD/GBP rate in three months’ time could be anywhere between 0.4800 and 0.5700.

Where sharp movements both ways are highly probable, the appropriate hedging strategy for local exporters is to buy three and six month NZD call options against the GBP at a strike rate of 0.5300.

Global equity markets have weakened and the USD has strengthened in recent days as it seems President Trump and Chinese leader Xi Jinping will not have the opportunity to meet on trade before the end of the month.

How the financial/investment markets will react will depend on how much progress is made at trade negotiations in Beijing this week. Chinese Vice-Premier Liu He will join US Trade Representative Robert Lighthizer and Treasury Secretary Steve Mnuchin in the high-level talks. If the meeting communique is positive on resolving the trade wars the equity markets will rally and the USD will weaken back to $1.1500 against the Euro from the current $1.1325 level.

The medium term view on the USD remains the same, weaker in 2019 due to the Fed U-turn on interest rates, larger US fiscal deficits and the trade wars ending.

The implications for the NZD/USD rate would suggest higher towards 0.7000, and that is before even mentioning the return of whole milk powder prices to US$3,000/MT last week.

Last 6 quarters of unemployment: 4.7,4.5, 4.4, 4.4, 4.0, 4.3. Remembering that this figure is created by a poll not an actual head-count of any sort it seems far more likely that the 4.0% figure of last quarter was the rogue one - It was a sharp drop from the preceding trend - and now we are back to something closer to reality. Still a good figure, though the rapid rise in working age beneficiary numbers is not so good.

Perhaps its the non-working age beneficiaries we have to worry about now? And they are an absolute number, not the results of a poll!

Agree that it's a problem, though mitigated by population growth, and means tested superannuation is electoral cancer (even if sensible).

There was similar data in Australia too with the unusual uptick in December.

RBNZ will be dovish ,on Wednesday. The up or down will go.. Inflation and importantly GDP will be ,marked lower, Australia , global growth and bank costs/Hayne will get a mention .NZD set to fall further this week
If I am wrong, I will blame the dodgy data, Brexit , Trump, Huawei and especially financial advisors.

Last week it was "all systems go, full steam ahead" cheery reporting for the future continued appreciation of the NZD. This week, after a sharp decline, it is the fault of dodgy data. I was wondering how he could possibly spin the sharp decline that occurred last week and was looking forward to reading his weekly commentary. He did not disappoint, his unwavering bullish outlook for the currency remains intact despite the price movement.

It would be better if Mr. Kerr removed his rose tinted perma-bull glasses and reflected in an appropriate manner about the data that drives the NZD long-term. I like and will now use one of his phrases from a few months ago, "the NZD always moves 4c further than you think it should". I suspect that this should apply to the gains that occurred in the last quarter of last year instead of how he applied it to the decline that happened previous to that point.

It's impossible the Kiwi could ever fall vs the USD the fact that it did can be explained by 'dodgy data' The FX markets are suckers and the Kiwi will soon resume its flight to the moon and beyond dwarfing the value of all other currencies.

Citing 'fake news' or 'fake data' wont help the fact that your bullish NZD is under water. If anyone in the market was following your advice (which I seriously doubt) then are they to take comfort from the fact they 'should' be in the money?

The simple fact is as the Aussie Economy slows global investors will sell AUD and NZD. If you were bullish NZD v AUD I'd understand.... but NZD v anything else? I guess we will just see a whole lot of 'fake data' claims in the months ahead as the NZD moves lower.