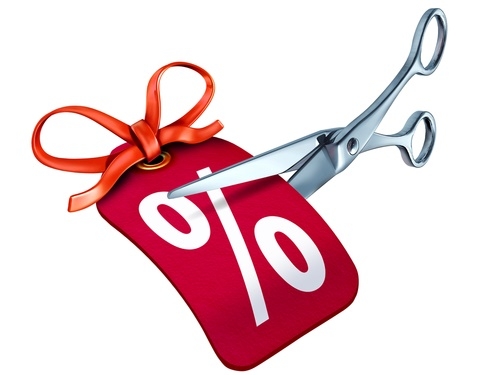 ANZ economists are now picking that the Reserve Bank will be forced to drop official interest rates as soon as next month - and follow up with a further cut a month later.

The forecast - almost an urging - from the country's biggest bank adds to pressure on the RBNZ ahead of its Financial Stability Report on Wednesday, which is sure to focus on Auckland's raging hot housing market.

The interest rate cut prediction, from ANZ chief economist Cameron Bagrie, followed release of the ANZ's monthly inflation gauge. This showed that falls in the housing, miscellaneous goods, and recreation & culture groups contributed to a 0.2% fall in April.

"We expect the RBNZ to cut by 25bps in June and follow up with another cut in July."

Two cuts of quarter of a percentage point would reduce the OCR from its present 3.5% to 3%. This would still leave New Zealand with higher rates than many countries. In Australia official rates are just 2%.

"The OCR should be lower," Bagrie said.

"Demand across the economy is still solid yet the reality is that inflation has failed to show up at the growth party. Core inflation has now been below the 2% target for 21 successive quarters. That’s enough in itself to justify OCR cuts.

"The RBNZ has an inflation target not a growth or a housing one. Of course the three are inter-connected but one dominates; one policy instrument (OCR) equals one target (inflation). Any high school student knows you can’t solve for two unknowns in one equation.

"...Monetary policy is more than merely monitoring demand and wage and price setting outcomes; the RBNZ must manage the risk profile around them."

The RBNZ is largely considered by the market to be holding interest rates up at the moment out of fear of what may happen to the already overheating Auckland house market if it cuts rates now.

But the central bank's essential problem is that by maintaining the OCR at its current 3.5% level (up from 2.5% at the start of last year), it is using a monetary policy instrument to tackle a financial stability issue (the Auckland housing market). The official purpose of monetary policy is to ensure price stability - which is maintaining inflation between 1% and 3% with an explicit emphasis on the mid-point (2%) of that range.

The Reserve Bank will be releasing its regular six-monthly Financial Stability Report on Wednesday, in which the overheating house market - particularly in Auckland - is certain to take centre stage.

As recently as April 30 Reserve Bank Governor Graeme Wheeler said: "It would be appropriate to lower the OCR if demand weakens, and wage and price-setting outcomes settle at levels lower than is consistent with the inflation target."

From the RBNZ's perspective, it would likely prefer to have some sort of new measures in place to dampen the Auckland housing market before it moves to reduce the OCR. Therefore, Wednesday's Financial Stability Report may see some such measures at least heavily foreshadowed if not actually introduced.

The RBNZ has already signposted placing mortgage lending for property investors into a new category. The central bank sought submissions on these proposals and this submission period ended in the middle of last month. The RBNZ indicated that the move to recategorise residential property investors could be a precursor to introduction of a new macro-prudential tool. The RBNZ already has one of these in operation; its 'speed limits' on high loan-to-value lending.

Bagrie said that prices in the ANZ's monthly inflation gauge rose 1.0% in the three months to April, and were "moving in a trajectory consistent with" the RBNZ’s March Monetary Policy Statement pick of a 0.5% increase for second-quarter non-tradable inflation.

"However, price rises outside of government charges and housing were virtually non-existent, with just a 0.1% increase over this period. What has been notable has been a lack of generalised inflationary pressure despite the economic expansion being well advanced."

"Growth has congregated towards trend and the downside (dairy) is opening up at a time core inflation is closer to 1% than 2%.

"The RBNZ may ultimately be proven right and the inflationary dragon is merely sleeping. If so the OCR can head back up. However, alternate scenarios are real. It’s looking more like Sleeping Beauty than a dozing dragon. Cutting the OCR is a low delta option to manage emerging economic risks. We see little point waiting until the second half of the year to exercise this optionality."

In their weekly economic note released later in the day, ANZ's economists said additional macro-prudential measures from the RBNZ at some stage look "highly likely in our view and will probably fit into three broad options":

The ANZ economists are expecting that, along with Auckland houses, a fair amount of discussion in the RBNZ's Financial Stability Review will be around the dairy sector.

The economists said given uncertainty in current global dairy markets they now expect "more conservatism" to be applied to Fonterra's opening milk price forecast at the end of May.

"Current spot prices on GlobalDairyTrade are somewhere around the low $4/kg MS at present, so it would seem a stretch that the opening price will be pitched around the mid-$5/kg MS (current market expectations). To us a more prudent forecast in the current environment would be $5.00-$5.25/kg MS."

"After financing and drawings (but before capital expenditure) this will be below break-even for many, which is generally considered to be $5.50-$5.75/kg MS. The shortfall will need to be bridged by seasonal finance and any cost efficiencies that can be gained. There will be some pockets of stress emerge," they said.

"The RBNZ will be particularly mindful of what the current weakness in incomes could mean for the broader economy and financial sector," the economists said.

"What we feel is not widely appreciated is that even with the modest recovery forecast in the 2015/16 payout, farm cash flow will likely be under severe pressure well into 2017. We are already detecting increased stress in the rural regions. Elevated rural land values look particularly vulnerable.

"We fully expect to see plenty of analysis in the FSR looking at farm debt levels, the skew in this level of debt and breakeven profitability levels."

Finally, the reality of the global environment and its influence on NZ is acknowledged. And possibly acted upon.

Be careful what you wish for. The surprise increase in NPV for pre-existing future bank payback demands will topple the not so liquid in an environment where solvency is not well catered for.

Can you expand on this point Stephen? I'm interested in which type of borrowers would have these kinds of borrowing terms.
Or are you referring to Joe Public being able to extend themselves even further at lower interest rates?

Those paying fixed interest rates via swaps, contract and bond issuance. The most non-abstract visualisation is coupon bond market prices rising in a lower yield environment. Emerging competitors can issue at a lower rate and undercut legacy business survival. The cost of marking the higher NPV debt to market (provisioning) or retiring it is a cost to the efficiency of anyone's balance sheet.

What will this this do to yields on longer term Treasury bonds Stephen Hulme? Will they spike like they have in Europe?

New Zealand's outstanding government term debt is the size of a small rounding error in comparison to the global sovereign debt market. Thus it remains hostage to that which impacts the price of the US Treasury bond market. QE related Issues of liquidity currently plague the G3 markets, which may force large player liquidations wishing to remain within volatility guidelines. I would sell price upticks (lower yields) post any actual OCR cuts.

So what are we going to do about Government charges?

"However, price rises outside of government charges and housing were virtually non-existent, with just a 0.1% increase over this period. What has been notable has been a lack of generalised inflationary pressure despite the economic expansion being well advanced."

How about one cut of 0.50% to try and frighten the horses?

westpac have now come out and said only 40% chance, it seems if one says cut the other says dont

Who's to say the recent change to an easing bias wasn't aimed primarily at jawboning the NZD down (while also helping tradable inflation along).

So all of those who were conned by the Banks to fix their mortgages are going to be H.P.O ( Highly pissed off)