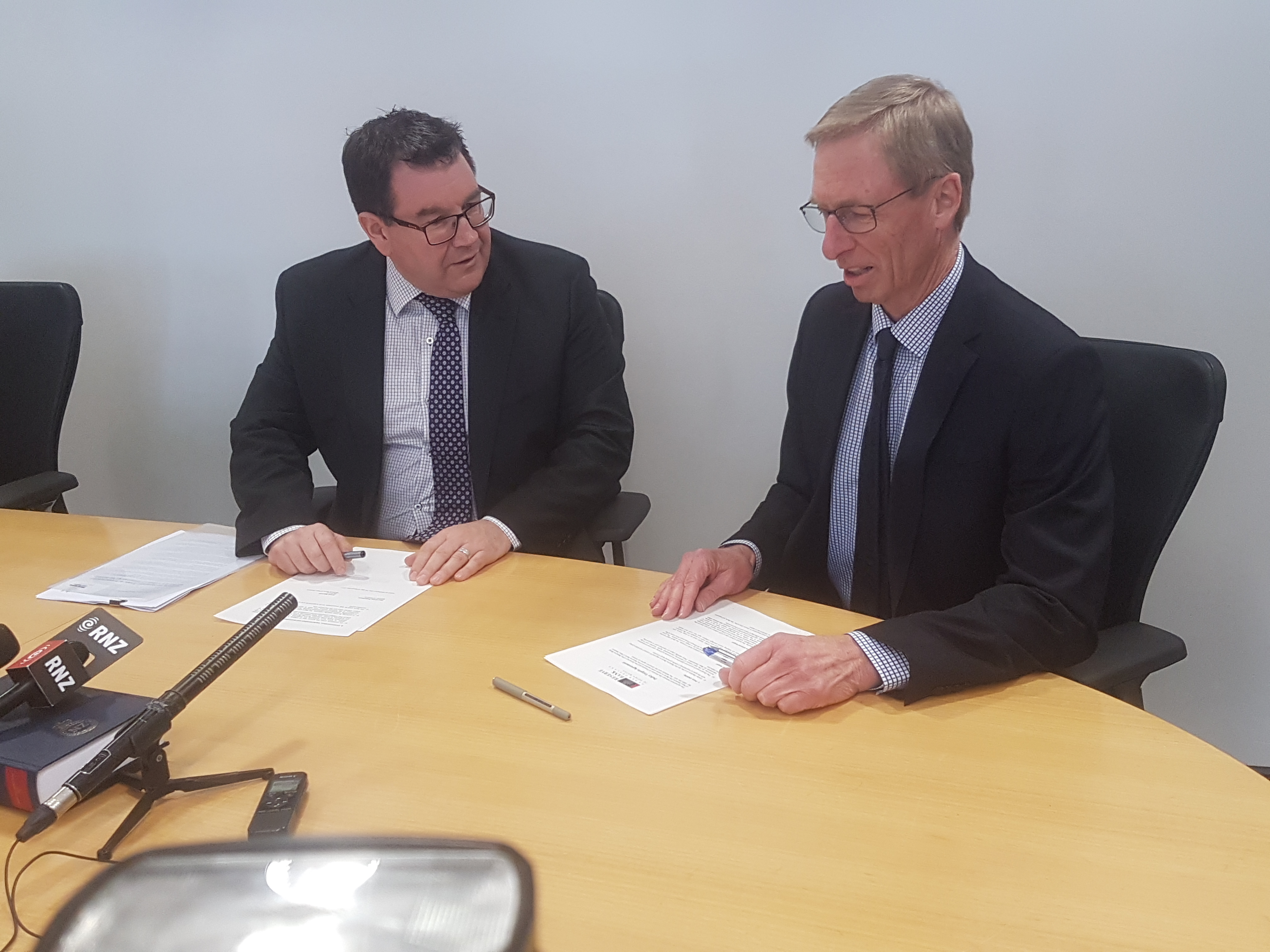 The Reserve Bank's latest Monetary Policy Statement to be released on Thursday will be all about what’s under New Zealand’s economic hood, rather than any changes to the Official Cash Rate (OCR).

The market, and most leading economists, are picking no change for the OCR, which has been at the historic low of 1.75% since November 2016.

There has, however, been a significant amount of activity in New Zealand’s economy since the RBNZ released its last MPS, in November 2017. And this activity is expected to draw some interesting commentary from Acting Governor Grant Spencer, who is presenting his last MPS before retiring in late March, at which point the new Governor Adrian Orr is taking over.

One such area of interest will be the recent surprise upward revision in economic growth.

Stats NZ said the recalculation was due to new measures. ANZ said at the time the new figures painted a “vastly different picture” in regards to New Zealand’s recent economic performance.

“Is there less capacity now because of this, or was potential growth higher too?” asks ANZ senior economist Phil Borkin, who is expecting to see a dedicated explanation within the MPS describing how the changes affect the RBNZ's overall views.

The most recent estimate from the central bank is for GDP growth of 3.8% in the year to March – this is now looking less likely, Kiwibank senior economist Jeremy Couchman says.

“NZIER’s December quarterly survey of business opinion (QSBO) showed that a net 11% of firms were pessimistic about the general economy over the coming six months, down from a net 5% of firms being optimistic in the third quarter – which in turn was down sharply from June.”

Although he says the change in Government following last year’s general election is likely to have distorted firms’ perceptions of business conditions – and BusinessNZ’s Performance of Service Index (PSI) has remained elevated over the same period – the fall in confidence does place a cloud over near-term growth.

This seems especially likely after recent research by the RBNZ highlighted that uncertainty, in this case political, tends to have a sizeable impact on activity.

It is also likely Spencer will have more to say about the impact of the Government’s policies on the economy.

In November, he called the Government’s new policies “expansionary”, but admitted their economic impact was “very uncertain”.

Since then, however, the Government has released both the Half-year Update and a mini-budget. Both will provide the Reserve Bank with a lot more information to give a better assessment of how some of the Government’s policies will affect the economy.

Inflation will also be firmly in focus after December’s Consumer Price Index figures came in lower than market forecasts – just 0.1% over the quarter, against the Reserve Bank’s 0.5% forecast.

“The lower starting point highlights downside risks to inflation over 2018 and means the Reserve Bank is unlikely to be in any hurry to hike interest rates,” Couchman says.

“While this could mean that the RBNZ pushes out its projection for the first rate hike, it seems more likely that it will maintain its forecast for rates to stay on hold until the second half of 2019 and reiterate that ‘monetary policy will remain accommodative for a considerable period.’”

What about a nice rate cut on Thursday?
Just to fire an unexpected shot, keep the markets on edge, and confuse the currency traders.
Not to mention giving the mortgagebelt a good boost starting into 2018.
And inflation does need a bit of encouragement into the mid target range.

In short everything's going well so there's no OCR increase because RBNZ needs to print money like mad to keep the economy going. That's quite a mental backflip they've performed.

Historians will look back one day in amazement – too low, too long.
A powder keg in the making – what on earth were they thinking.
The world may have had a little taste today of things to come.

What choice did they have when Lehman bankrupt, & the merchant banks seized up in the US, house prices fell 30%, CDOs destructing, etc?

i think the point is too long, we now have huge distortions because of it, a d the EU is still doing QE so will only make the distortions bigger.

Or... History will show that the in begining of the 21st century, a structural change towards long-term low inflation and interest rates due to major technological and efficiency based internet improvements, took place

You need to be careful when it's in the "new paradigm" phase.
http://www.amarketplaceofideas.com/wp-content/uploads/2015/11/bubble-pha...

History will show that the in begining of the 21st century, a structural change towards long-term low inflation and interest rates due to major technological and efficiency based internet improvements, took place

But...we know that it's because Quantitive Easing was tried in order to prevent a downturn and stimulate growth. This is not some unknown.

And judging by the many interesting notes Stephen Hulme posts, the attempt has not been spectacularly successful - only pumping up asset prices - and central banks are running out of back-up plans should they need to try more of the same thing.

There's not much under the hood......The SME's are sick of being the governments ATM and the left crowd better start learning how to do some real work for a change.

Eh, equally you could say that wage earners are sick of having to foot the bill for society while a bunch of folk get to make tax free income by pretending it's not income, and property speculators better start learning how to do some real work for a change.

Drop personal and company income taxes and raise land tax instead and you'll benefit both wage earners and SMEs.

RS - You have just placed a whole heap of issues together to deliberately create confusion.

SME's are not all about property. Property Speculators already pay income taxes on profits.

2nd group don't generate anything towards the tax base as their whole income is generated by the 1st grou and private enterprise employers........the First group still need an employer or they are free to go and work for themselves and put their own money on the line.......if it so easy being an employer and they get all these tax advantages you talk of then I'm pretty sure everyone would be doing it.

You seem to have an agenda on Land tax,.......where are your supporting figures that sufficient taxes could be raised from a land tax whilst dropping the other taxes you mention??

I might be more than happy to pay a land tax if all the other taxes were dropped including GST.

I've not conflated SMEs and property. Re-read on that. I've suggested dropping income taxes (including on companies) and supplementing them via a land tax instead, because it encourages productive capitalist investment rather than asset bubbles.

Property speculators essentially get to pretend capital gains (that they are anticipating as incoming wealth) is not income, thus being exempt from income tax. When yields are as low as they are, most realistic people know what the game is. Heck, even one of the conspicuous investors on here - in an accidentally open moment - claimed to have sold a property for $100,000 profit recently...but what's the bet that's being treated as income?

I agree - I'd be happy to pay a land tax if other taxes were dropped, especially - if budgeted along the lines of where TOP were heading, most people would pay less overall.

Heck, income taxes were by no means the first taxes or a constant and ever-present method of taxation...if you look at an example such as the USA, they came along much later in the game. But it benefits those who own much to push taxes away from themselves and on to those who have to work for a wage and can't afford to disguise their income - as Donald Trump does, and says makes him "smart". There's no avoiding a land tax as there is an income tax.

You realise that there are a significant number of left-leaning business owners, entrepreneurs, and general go-getters don't you? Or does that not fit within your straw man statement? Business acumen isn't the sole providence of the right.

The ones who understand that one side of the business equation is a customer pool with money to spend, and that everybody's employees are also everybody's potential customers.

Yes there are a significant number of left-leaning business owners......they usually have some type of supply contract with the government or its agencies........

I never said that business acumen was sole providence of the right........ In fact I'm thinking the left are the craftiest people of all........their work on how to rearrange the economy so they can take a large cut without any outlay or day to day grind and also implement all manner of rules and regulations is quite astounding.

In fact I'm thinking the left are the craftiest people of all........their work on how to rearrange the economy so they can take a large cut without any outlay or day to day grind

But you have just right there described Trump's tax plan. Keep the tax burden on the small guys while you take a large cut without day to day grind.

... oh yes ! ... and the cleverest part of all is that the Trumpster has managed to sell it to the American public as a positive boon for them all ...

When in fact , his rich mates and the mega-corporations are gonna make out like bandits ...

... another wedge to further divide the haves from the have nots ... SIGH !