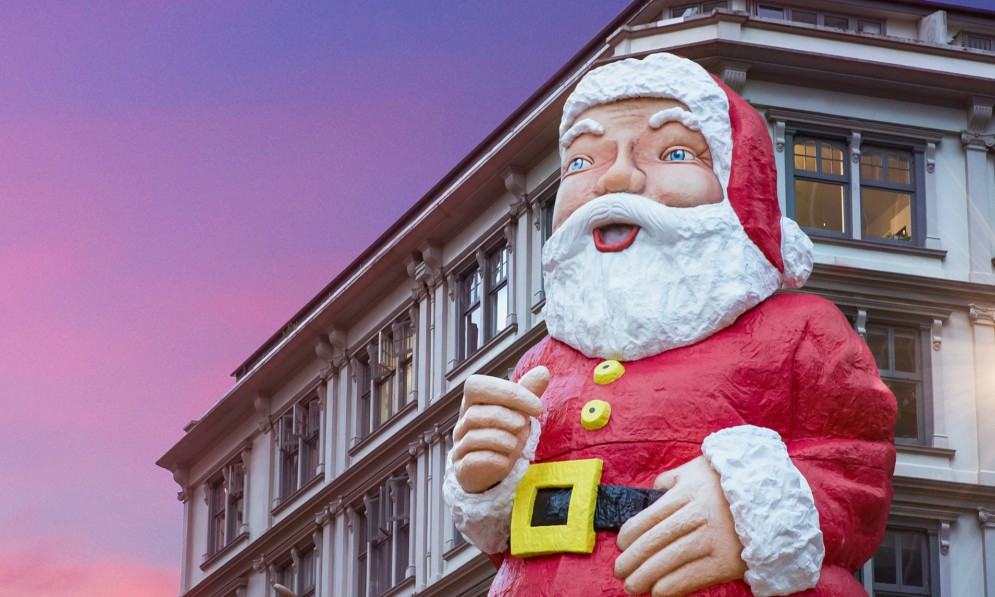 Photo: Heart of the City Auckland.

Our planet has completed yet another lap around the sun meaning it'll soon be 2020.

That means it's time once again for our annual Interesties Awards.

This year has certainly had its share of tragic events, and our thoughts are with everyone impacted by the terrorist attacks at the Christchurch mosques on March 15, the recent Whakaari/White Island eruption, and the devastating measles outbreak in Samoa, a country closely connected to New Zealand.

As we move towards a new year, here's wishing all interest.co.nz readers, viewers, contributors, commenters and staff a very Merry Christmas, and a happy and fulfilling 2020. And thanks for your support during 2019.

Without further ado, here are the 2019 Interesties where we find out what Santa has in his sack for the people who made our news this year.  As ever, we welcome your comments, and suggested additional awards, in the comment thread below. (All previous versions of our annual Interesties can be found here).

The Throw the CEO Under the Bus Award - ANZ NZ chairman John Key for his handling of David Hisco's departure.

The Gap Year with a Difference Award - Andrew Thorburn for the message on his LinkedIn profile (below). This came after the former BNZ CEO left his job as CEO of its parent National Australia Bank (NAB) in February following criticism of NAB in Royal Commissioner Kenneth Hayne's final report.

The Have your Cake and Eat it Too Scandal Award - Westpac Banking Corporation for allegedly contravening Australia's anti-money laundering laws more than 23 million times, including apparently failing to "carry out appropriate customer due diligence on transactions to the Philippines and South East Asia that have known financial indicators relating to potential child exploitation risks."

The Chicken Little 'The Sky is Falling on our Heads' Award - ANZ Banking Group CEO Shanye Elliott for comments (here and here) on the Reserve Bank of New Zealand's proposed increases to banks' regulatory capital requirements.

The So Long and Thanks for all the Headlines Award - Long serving BNZ chief economist Tony Alexander who left the bank.this year.

The Best use of Music in Economics Reports Award - Kiwibank chief economist Jarrod Kerr. (See the example below).

The Free IT 101 Lessons Award - Gabriel 'Gabs' Makhlouf, whose term as Treasury Secretary ended this year amid a Budget leak debacle.

The Most Unfortunate Name Associated with the former East Germany - Christine Stasi, IAG's "group executive people, performance and reputation." (Is that a fancy name for HR?).

The Charming the International Scene but Struggling to Deliver at Home Award - Prime Minister Jacinda Ardern.

The Minister who Forgot which Hat he was Wearing Award - Green Party co-leader James Shaw. (Kind of sums up the Census problems).

The Please Put a Sock in it Award - Shane Jones.

The Red Rag to a Bull for Grumpy Old Men Award – Greta Thunberg.

The Dead as a Dodo Award - Capital gains tax.

The Services to Satirists and Cartoonists Award - US President Donald Trump, with a couple of examples below.

(The cartoon below comes from Politico's Matt Wuerker).

The Chart of the Year Award - Bloomberg's Tracy Alloway. She tweeted the chart below in May accompanied by the following sentence;

"My avocado-based quant model says buy Bitcoin based on the Mexico tariffs news."

Finally, thanks to all those who've made informative, entertaining and humorous contributions to interest.co.nz this year adding to the discussion and debate. We appreciate it.

.. for , getting his euthanasia bill through parliament ; for agreeing to radio interviews ; for talking straight to the point ; for being poised even when lampooned by an awful cartoon in the Herald ....

For doubling his party's support in the polls !

David Seymour's end of life bill was is all about the polarizing effect he knew it would have... so ends up all about David himself.... so he's now off the floor in the polls... job done. Well done David.

I don’t vote Act but I appreciate his work on this bill and his commitment to being a genuine libertarian as opposed to just conservative.

The " I didn't know you loved me " award goes to Winston Peters .. ... having spent the past 4 decades snapping and snarling at journalists , calling them parasites . .. he's now admitted that NZ would be the poorer for Mediaworks disappearing altogether , and recommended the Commerce Commission to look again at their desire to merge with Stuff . ..

GBH. In truth it really stands for Grevious Bodily Harm. The great Australian coach Alan Jones and his great team, had both trouble and fun with that one during their famous grand slam tour. But actually after all this year’s great contributions, entertaining, clever & enlightening, would say the above caption “Scumbank,” all on its own, is the quip of the year.

More than that, he takes whatever weapon his attacker has, takes it off them,
and then beats the attacker, with the attacker's own weapon.

I thought you had the list nailed with "Scumbank" ( I hadn't seen that video!) but several Awards below that might take the cake!
A good list, as ever, and the only queston to be answerd is: Who will win the "Woohoo, we're still here!" Award in 2020?!
Have a good one.....

The identity of the anonymous person behind the "Turn Ardern" movement can be revealed - he's a 66-year-old bricklayer from Canterbury who doesn't think the Prime Minister is doing her job.
Colin Wilson is behind the Coltheman1 Twitter account that has served as a rallying cry for those voicing opposition to Jacinda Ardern through entering news agents and bookshops to turn around magazines and books featuring her face.

He recently told his 1788 followers: "I am so proud of all our operatives that give freely of their time to ensure that the public are not subjected to all these photoshopped pictures of someone we don't even know masquerading as our PM. To say nothing of the bulls*** in the story behind the covers.

Henry you relly have reached the depths of despair over this award...admit it you really dont like a women running this country..come on its ok.

PM Judith would be a BIG improvement. She is a lady who can get stuff done not like the cover girl ardern who only talks about results and makes promises.

... they are a contrast in styles ... if there's a tragedy happening , you'd want Taxcinda there ... she does great hugs and tears ... she sympathizes ..
Crusher would just tell the injured to harden the f up ... to get their sh☆t together . ..

Well put GBH though most people have enough empathy to understand how people are feeling in a crisis.

... this COL is all about wellness , feelings , empathy , ideologies ... and , we're getting fed up with it ... we need some hard nosed pollies who get things done ...

She has achieved absolutely NOTHING while in office , and failed to keep even a single election promise .

Kiwibuild was simply a scam to entice young naive voters into her web of deceit , and anyone with Grade 4 arithmetic and half a brain, knew it could not be done

For that she should offer to resign in shame .

This hapless coalition of losers has successfully alienated those of us in the productive sector who pay the country's wages , grow its food , milk its cows , and pay the taxes .

Business confidence was shattered , and farmers were used as a punch bag .............they just shut up and carried on the face of the open hostility they received .

The day of reckoning is coming

Best sub plot,
when the USA farmer got on the plane to China wishing to "make his fortune", just like everyone else on the plane.

The most misleading award goes to: Jacinda Ardern & the Labour party for the "Year of delivery" and "let's fo this"

No Kiwibuild
No cull on immigration
No CGT

Admit it - you just hate women .

I hate liars mate, I think most people would.

The 2019 " et tu , Brute ! " award goes to Jason Kerrison ... former friend of Labour MP Chris Faafoi ... who , spurned by Faafoi's failure to speed up immigration for his Kenyan stepfather ... proceeded to push Faafoi under the media bus by outing him .... " Nasty " is the only word that springs to mind , Mr Kerrison ...

Even my confidence in the Jones Boy has been shaken. It may all be a billion tree fire hazard.

And the J.C. medal for lifting consciousness among interest dot co readers 2019 belongs to Audaxes.

Set of pom poms and cheerleader uniform goes to Simon Bridges for gushing admiration for the policies and acheivements of the Chinese Communist Party.

Actually I would call it a tie, but if not, at least as far as my further latter life education goes, Andrewj would be second, but only by a nose.

I'd make it a joint tie for the Golden Gong of Enlightenment between Audaxes , Andrewj , Henry_Tull ... and Waymad ...

Great awards, Interest. Thanks for a good year of journalism and merry Xmas.

Excellent stuff one & all. No pun intended.