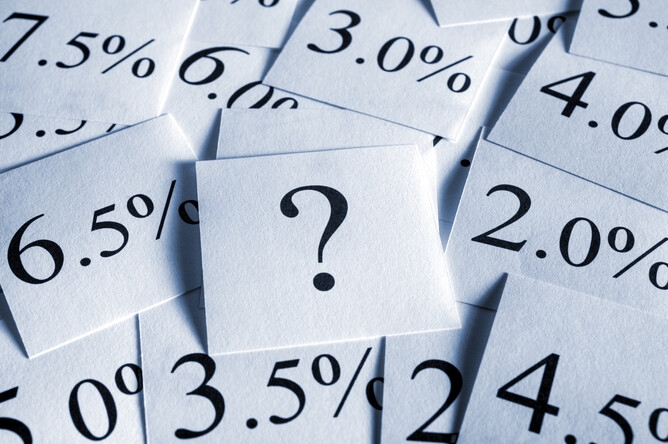 Following Wednesday's disclosure that the Reserve Bank could take charge of banks' mortgage serviceability test rates before it gets its collective hands on a debt-to-income (DTI) restricting tool, now's an opportune time to take another look at where banks currently have their test rates.

The concept of a test rate is that when considering home loan applications, banks calculate the ability of the borrower to repay the loan at a higher interest rate than current rates. Thus the lender looks to satisfy themselves that the borrower could maintain their repayments if interest rates rise. Lowering test rates increases borrowing capacity and increasing them decreases it.

An ANZ spokeswoman told interest.co.nz the bank's test rate, used across all types of homeowner borrowing, is currently 5.8%. An ASB spokeswoman says ASB's is 6.45%. A mortgage broker says there haven't been many changes since the big Official Cash Rate (OCR) cut in March 2020, with banks' test rates currently ranging from 5.5% to 6.5%.

The Reserve Bank slashed the OCR by 75 basis points to 0.25% at the onset of the COVID-19 pandemic.

Interest.co.nz also asked BNZ, Kiwibank and Westpac what their test rates are, but they wouldn't disclose them.

“Our serviceability rate is just one of a number of factors we take into account when considering loan applications. Other factors include income, financial commitments and living expenses,” a Westpac spokesman said.

Within its debt serviceability restrictions announcement on Wednesday the Reserve Bank said if it needed to take action before a DTI tool is available, "an interest rate floor potentially could be implemented within two or three months." This could involve settling floors on the test interest rates banks use when assessing borrowers' serviceability. The Reserve Bank says the floor can be specified in absolute terms, or be set as a margin above commercial lending rates.

With the actual rate decided by the Reserve Bank, all banks would apply a serviceability interest rate to their affordability assessment calculation as a minimum affordability measure for borrowers.

The Reserve Bank published the chart below in its Financial Stability Report released in May. With the recent huge house price increases and everyone who can stretch themselves to the very limit already in a house, there is now a real possibility of a huge hole appearing in new lending. The banks are facing the possibility of ever increasing headwinds at this point. If interest rates start climbing and other tools are used to prevent FHB from "overcommitting themselves" they will be locked out of the market for additional years and years.

What world are you living in? Nobody would be "locked out", house prices would just fall to a point where sellers and buyers can meet. It's basic offer and demand.

The number of houses being sold recently represents a small number of the total stock so it won't make any difference in the big picture anyway.

Well A lot of so called "experts" have been predicting house price falls for a few years now so not sure significant drops are on the horizon? Do you not think with the doubling of house prices in a lot of areas, combined with LVR's and then DTI restrictions...first home buyers may find it tough? Average house price exceeding $900k while average wage is around $80k....don't think it will be easy for those at the bottom?

If this price function were working as it should then prices would never have gotten to where they are now. The underlying issues that drove things to this point haven't been resolved.

And against this backdrop, ( at least on the site we monitor and the areas ) there is an a continuing fall in the inventory of property for sale. If it comes down to the most fundamental of economic factors, being supply and demand, prices look set to increase further .

Not if effective demand is curtailed by (the fear of?) rising interest rates and tougher servicability tests or DTI.

Open homes are empty weekend after weekend now for a couple of moths, it may seem the problem would be a lack of demand for the current prices though.

We must be going to very different open homes… I see huge attendances of people at open homes, I went to Bayleys and Ray White auctions this week, they both had a staggering 100% sales rate!!!

Reaffirming my comment, this weekend all open homes were pretty empty, with the exception of a couple out of 10 with moderate attendance. We must really be attending very different open homes...

It is at double the 5 years fixed rate usually. But the expectation of inflation coming may increase it next year. But right now, there seems to be no slack in demand for home loans. Banks are competing in a growing market and may relax this off the record a bit, I suppose.

Meanwhile in Australia the Commonwealth Bank (ASB banks owner) has already decided to lift Loan serviceability interest rate assessments as of this coming week and the RBA are imminently about to put in higher LVR's and other limits.

A nation actually taking action - not acting as Nero whilst Rome burns. I'll guarantee Mr Orr one thing him and the RBNZ board would be unemployable in Australia.

It might reflect on Orr's and the boards left wing way of thinking.
You can also see it in most left wing councils in NZ . Debt up to their eyeballs and more. Neither could run the proverbial in a brewery IMHO

Why do this though? Wages tend to move in line with inflation so changes to the rate don't really matter.

I'd be more concerned with the type of employment someone is in. Airlines are cyclical and tend to fire a lot of their staff with every downturn whereas civil servant, law enforcement or health worker is pretty much a job for life.

“Wages tend to move in line with inflation” Do they now? Or are we not measuring inflation correctly?

It's disturbing to see banks have been decreasing their serviceability test rates at the same rate yearly interest rates have dropped. Everything boils down to how overleveraged their clients are, meaning the bank system is less resilient to rate increases now than we were just a couple of years ago although totally at their own fault.

It is not about the buffer between the rate and the benchmark rate, but the actual disposable income at the end of the pay period.

And that is part of the banks servicability test. Income - (an allowance for living costs +other debt servicing costs) has to exceed the cost of servicing the mortgage at the servicability rate.

What would be interesting data is a breakdown of mortgage customer debt servicing ratios as they are right now. Even the banks dont have this data..its a question of dont ask dont tell once a mortgage had been drawn down. Peoples financial reality can quickly veer a long way from the hypothetical future income as presented during the initial application. Many wouldnt qualify for the mortgage they currently have at these current nosebleed dti/dsr multiples. How many? Thats the trillion dollar question thats keeping this wile e coyote market sitting on a broken boulder suspended in the air above a very deep canyon.

Does refixing the mortgage count as a refinance event?
i.e. someone on $100k loses their job, picks up a $60k job, still meets their mortgage payments but barely scrapes through. It would be deemed irresponsible under the lending code to assess someone with a $60k income as $100k for new lending, surely it would also be irresponsible for the bank to turn a blind eye to the change in circumstances.

If the loan is across the same term there's no change to the original agreement.

Not if they don't increase their loan size or term.

It's a minority where the servicability gets worse from where it started, usually it gets betteraspeople get promotions and pay rises. The big exceptions are loss of job, or pregnancy.

Pretty big exceptions. Serviceability issues plus high unemployment has led to some major housing crashes in the past.

The future of employment will become a key factor as employment is the bedrock of ability to service debt. Is it possible that Banks will or may already factor in the risk factor of a borrowers job? The global chaotic situation makes prediction even more problematical and whilst NZ as a primary product producer will always have a market the price and the purchasers ability to pay will have a negative effect on all economic activity, employment and inflation of overseas goods as the NZ$ will suffer adverse risk reaction - a lower $ is good for exports only if the increase in value exceeds the reduction in price in $ terms. My gut feel is that Covid effects will materialize over the next 12 months, unemployment will increase as inflation increases but not reflected in CPI due to inadequate weighting of the basket of goods used to calculate CPI. If this eventuates strong pragmatic and innovative leadership is required and the abject failure of the current clowns impersonating a Govt gives no confidence that they will perform well and lead NZ to better times. I suspect social unrest in NZ and Globally will probably lead to violence as history records and then who know how it turns out and mortgage serviceability and asset prices become irrelevant as survival is pre eminent to most.