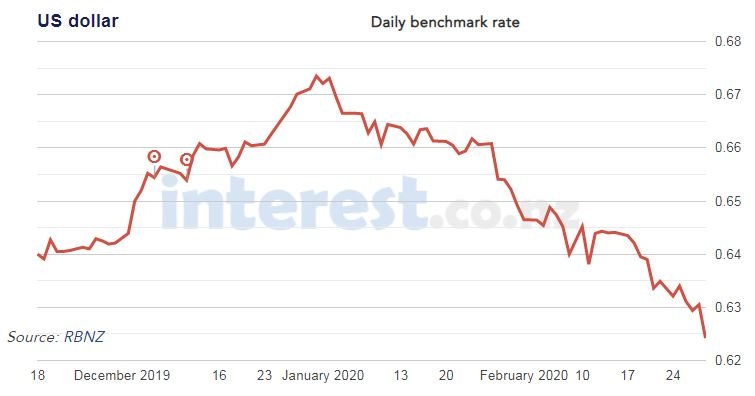 Investment and financial markets around the world remain in a tailspin as fears compound about the potential economic and business consequences of the coronavirus shock.

As analysts and commentators struggle to measure and forecast the consequences, by far the best description of the current situation came from veteran Aussie retail king, Gerry Harvey of Harvey Norman fame, when asked for his view last week, his response was “who knows”. Whilst not very helpful or insightful advice for business folk facing currency management decisions, it was arguably a more accurate and honest assessment than most of the other pontifications in the daily media. It just remains too early to make clear judgements as to the magnitude of the adverse economic impact and for how long it will last. Hopefully, by the end of March the world will be in an improved position to judge the level and timing.

Against this backdrop of total uncertainty as to what the future holds, the financial and investment markets are voting with their feet in an almost panic reaction that appears to have gone too far already. I view the current situation of the NZ dollar’s value on the forex markets as different to what is occurring in global equity markets.

The Dow Jones Index is down 11% is this year as investors panic in a brutal sell-off. The NZD/USD exchanger rate has depreciated 7.5% from 0.6750 in early January to 0.6250 on Friday 28th February. Prior to the coronavirus event, US equity markets had been trading at extreme high values based on price earnings ratios. So, in many respects the 11% drop is removing a lot of froth in the market that was always susceptible to a catalyst causing a correction.

In the case of the NZ dollar, at 0.6750 it was a long way from being considered as over-valued based on economic fundamentals. Therefore, in a relative sense the five sent sell-off in the Kiwi dollar has been exaggerated as negative global events overshadow the more positive local economic factors.

Since the GFC over 10 years ago, many economic and market commentators have continuously made bold predictions that a debt/credit crisis in China would be the cause of a global economic downturn. That credit event risk has never eventuated as the Chinese authorities have always acted promptly with monetary and fiscal policies to cut off and prevent any contagion. Whilst many in the West question whether the Chinese authorities have the capability to control and contain the coronavirus today, my view is that the Chinese government has the financial resources and clout to prevent a major fall in their economy, jJust as they did in 2010 with massive fiscal stimulus packages to save both the Chinese and global economy from the ravages of the GFC. It may be remembered that the Australian economy experienced a mining boom in 2012 with the AUD/USD exchange going above $1.0000 because of the Chinese fiscal spending on infrastructure at the time.

In a rather belated response to the rapidly evolving coronavirus situation, our Finance Minister Grant Robertson announced last week that the NZ government was in a good position, fiscal policy wise, to support the economy should the economic consequences deteriorate to a prolonged downturn.

Like many others, all the authorities can do is paint alternative scenarios of potential outcomes, assign probabilities to them and guess where we currently sit on the spectrum. Any money manager worth his/her salt developed such scenarios a month ago and already has portfolio protection measures in place.

The three scenarios are summarised as:-

-   Scenario 2: Medium term hit to the economy, however an eventual recovery (the “U” outcome).

Again, the Western commentators do not believe a vaccine to control the coronavirus is possible within 12 months.

However, I would never under-estimate China’s ability to get things done much, much quicker than that. The Chinese testing methods used to get a workable vaccine may not be acceptable in the US and Europe, but the Chinese do not really care about that.

Kiwi dollar response to a weaker USD still to come

Forward interest rate market pricing in the US, Australia and New Zealand has already moved to expecting immediate monetary loosening with interest rate cuts. As the coronavirus event is both a “Biological shock” and “Supply-side shock” it is not all that clear how lower interest rates will help the economies.

If the potential economic downturn was solely caused by a collapse in demand, then an easing of monetary policy would be suitable to re-stimulate that demand. However, that is not the case here.

The fall in interest rates has been a factor causing the lower NZD/USD value until now. However, the US dollar itself has now reversed out of its strengthening trend against the Euro as US interest rates plummet, but Euroland rates stay stable. The EUR/USD exchange rate has reversed engines over the last two trading days from below $1.0800 to $1.1025 currently. We have yet to see any NZD/USD rate response to the weaker USD. The NZD/USD rate touched a multi-year low of 0.6191 on Friday 28th February, however, it has recovered somewhat to 0.6250.

I have a feeling that inflation may resurface due to supply chain issues and I also suspect that the reserve bank will look the other way in order to protect the property ponzi.

I certainly hope you're right.

Imagine what would happen if interest rates had to rise.

Agreed. Ponzi must be maintained. When you stand back and look at the overvaluations of all sorts of stuff it makes you wonder who is calling the shots.

Of course the RBNZ would not hike rates .. but not because of the supposed property ponzi you claim... its because no right-minded central banker (nor anyone who had opened an economics text book) would raise rates to address the inflationary impact of a supply side shock.

From a technical pov, NZD has been in a down trend since mid 2017 and has just broken decade long support. Next stop is 2009 support levels. Need to ask what is driving the economy other than housing.

Markets are in the "sell the china story" mood.

The news from last week. For this and next quarter exporters revenue down, as exports originally planned for china go to other markets at lower prices.

Imagine you were determined to buy kiwi, why would you do so at January prices or higher.

The good news is there are still buyers (you might want to think that one through a little).

as exports originally planned for china go to other markets at lower prices.

If they want or need those exports.

Unacceptable methods Rog?
If they are testing on Uyghur detainees then perhaps a stronger word could be used.
" Unacceptable" is in the same league as Ponce Andrew's " conduct unbecoming "

Economic fundamentals constantly referred to as good. Really? Are these not based on trade with China being hunky dory??
Which some may note, they are not and won’t be for 3-6 months minimum. NZD is dropping because we are a commodity economy dep on China which is in cardiac arrest

Economic fundamentals which include a household DTI of 164% and Household debt to GDP of 94.6%.

But I mean, who needs worry about consumer debt when the main source of income contracts eh? A 0.75% OCR cut will surely soothe that mere flesh wound.

The only question that Mr Kerr should ask is how much more of my clients money can I lose this week .

Its premarket maneuvering , its Monday morning, after the Chinese data , but ANZ see RBNZ OCR at 0.25 percent by May, that is May 2020

I think people should be paying more attention to JPY than NZD. It appears to be starting to move as the world's safe haven currency.

Hasn't JPY been a safe haven currency for yonks? (along with the Swiss Franc and not since Brexit GBP).

Watching my CHF to NZD exchange rate (salary paid in CHF) and seeing we have hit 1.6750, with the only time it has ever been higher for the swiss franc was Feb 2009 hitting ~1.70

So perhaps there is one more jump to go before things start to reverse. That said, I'm going to cash in my pay rise and buy some NZD.

I also earn in foreign currency so the beers are on me this week ;-)

Roger defiantly clinging to his "glass-half-full" outlook as the last drop runs out of a hole in the bottom of his glass.

He is amazingly consistent. The only time that he was doubtful about the NZD over a year ago... well... the NZD went up. He is a rather good contrary indicator. The three scenarios he uses (U, V, L), well, there may be an additional scenario or two. He also neglects to mention where we may be on any of these scenarios. My view is that we are less than a third of the way into the market decline. The current supply chain disruption that has already occurred (although not yet shown up on the market shelf) strongly suggests that there will be much more effect on profit and share price in the global markets than has been reflected in the share market pricing to date. Similarly, our largest export partner essentially shutting down (look at https://www.bbc.com/news/world-asia-51691967 for an interesting comparison on the change in pollution emitted, which is a reasonable proxy for factory production in China) suggests that the NZ economy will be facing serious headwinds. Then, there is the tourist number reduction, the loss of foreign students, ..., there are many ways that the NZ economy will be seriously hit, even without any explicit COVID 19 infections in country.

Yep, always bullish on NZD. Flawless in consistency at least.

What a fine analysis
One of the best