Roger J Kerr says that although the NZ dollar is at the bottom end of its trading range, it may get a boost of Q1-2022 CPI comes in above estimates. The RBNZ needs a higher dollar to mitigate this high inflation, he says

Currencies / opinion
Roger J Kerr says that although the NZ dollar is at the bottom end of its trading range, it may get a boost of Q1-2022 CPI comes in above estimates. The RBNZ needs a higher dollar to mitigate this high inflation, he says 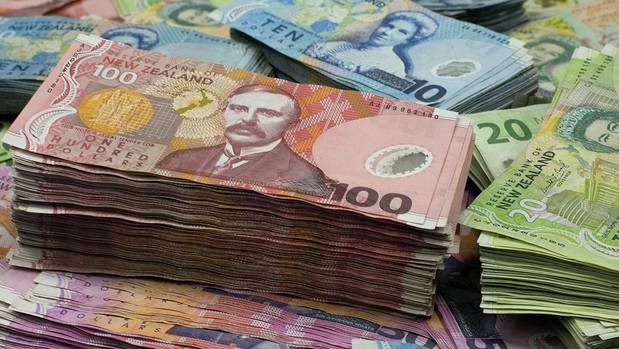 There were a number of outcomes disappointingly different to prior expectations over this past week that has resulted in the NZD/USD exchange rate giving back some of its recent gains. To see the Kiwi dollar trading well below 0.6800 at 0.6770 after the RBNZ hiked the OCR interest rate by an aggressive 0.50% on Wednesday 13th April would have certainly been disappointing for those expecting a more positive currency response (this column being clearly in that camp).

The weaker exchange rate would have also disappointed the RBNZ themselves, who need a higher exchange rate value to reduce import costs as part of a tighter monetary policy stance to get inflation under control.

An explanation as to why the Kiwi has lost ground following the RBNZ OCR review, as always, is a combination of a number of contributing factors:-

The second disappointment last week was weaker than expected Australian employment data for the month of March. After very strong jobs gains in February, only 17,900 jobs were added in March against prior consensus forecasts of over 40,000. The Australian unemployment rate remaining at 4.00% (take note Anthony Albanese!). The FX markets have been seeking evidence of a stronger labour market to support the RBA’s focus on wages data in May to justify their first interest rate hike in June. As a result of the disappointing jobs data, the AUD/USD rate depreciated from 0.7460 to 0.7400 and the Kiwi dollar religiously followed it lower.

The third disappointment last week was the European Central bank (“ECB”) failing to deliver to financial market expectations on unwinding their QE and signaling a move from negative to positive interest rates in the face of an inflation rate above 7.50%. Perhaps somewhat understandably in hindsight, the ECB were much more cautious as the Russian/Ukraine war bites into the European economy with a lot of uncertainties ahead.

Eventually, the ECB need to do what the US Federal Reserve and all other central banks are  currently doing in aggressively tightening monetary policy to combat inflation. The Euro was sold down to two-year lows of $1.0800 against the USD following the ECB statement as the FX markets expressed their disappointment.

Looking ahead, the prospect of the Kiwi dollar recovering to back above 0.6900 appears more positive over this next week with March quarter CPI inflation data due for releases on Thursday 21st April. Consensus forecasts are for a 2.00% lift over the quarter (largely due to petrol prices), increasing the annual inflation rate to 7.10% from the current 5.90%.

An actual result above the expectation should be positive for the Kiwi dollar as the markets build in more 0.50% hikes from the RBNZ.

While the Kiwi dollar has not been following whole milk powder dairy commodity prices of late, the upcoming GDT auction on Wednesday morning (20th) is likely to see another drop in prices from US$4,500/MT to US$4,250/MT, if the dairy futures prices are an accurate reflection of the current supply/demand position. The re-opening of Shanghai after recent Covid lockdowns may be a new positive influence for dairy prices.

Our column was highly critical of the NZ Government last year for their lack of forward-looking risk management when it came to dealing with the Covid pandemic health crisis. The delays in obtaining vaccinations and the lack of preparedness for Omicron with RATS testing kits just two examples of reacting to events as they happened, rather than foreseeing risks/developments ahead and being prepared in advance. Sadly, the previous “best health response is the best economic response” mantra from our Prime Minister is wearing thin on most as our Covid death rate turns out to be no lower than other countries who were less severe with lockdowns on the public and the business sector.

It appears the Government is again failing on basic risk management decisions when it comes to the NZ economy.

As business and consumer confidence indices indicate, the domestic economy is at a tipping point of an abrupt slowdown in activity. Household budgets are squeezed by significantly higher food and transport costs, thus discretionary spending is much reduced. The Government should be doing all it can to assist the RBNZ to bring this debilitating inflation back under control. Instead, Finance Minister, Grant Robertson in his budget on 19 May will add further “fuel to inflation the fire” when he announces $6 billion of new Government spending. Yet again, paying for the groceries from borrowed money, as every household knows, is going down a path that can only end in tears. It will be interesting to see whether the RBNZ in their subsequent 25 May monetary policy statement appropriately address the “elephant in the room” of the Government’s past and present fiscal policies contributing to over one half of our inflation problem. It will be a test of the RBNZ’s credibility and independence as to whether they highlight the persistently high “non-tradable” domestic inflation issue and challenge the Government to rein-in policies/regulations that cause these constant price increases.

The RBNZ should also address the Government on its immigration policy that is contributing to the acute shortages of labour across all industry sectors in New Zealand. One recent example is that new house builds cannot be completed as Councils have no qualified staff to do the inspections. Unfortunately, the Labour Government’s ideology prevents it doing what needs to be done for the good of the economy when it comes to immigration.

US dollar appreciates to near previous resistance points

The chart below of the US dollar Index (overall USD value against a basket of currencies, inverted in the right-hand axis) against the NZD/USD exchange rate indicates that the USD index currently at 100 (due to the war) is again close to the highs that it reached in 2015, 2017 and 2020. As the Russia/Ukraine war reduces as a new positive factor for the US dollar value, the FX markets can be expected to sell the USD from here as the Fed monetary tightening is now fully priced-in and the US’s dual deficit position is highlighted as a major negative for the currency value. Another reversal of the USD Index back towards 90 would see the NZD/USD rate comfortably above 0.7000. 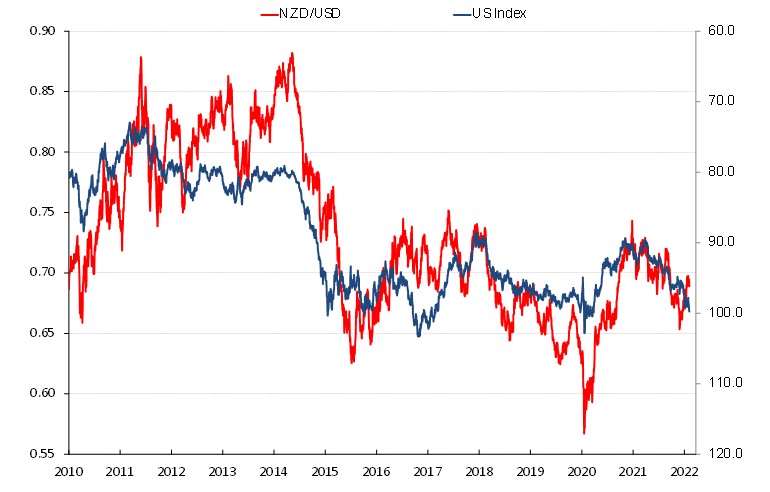 I suspect the chances of RBNZ addressing the government's contribution to domestic inflation are slim at best . The continued expectation of an increase in NZ Dollar value puzzles me as I can see substantial downside risk , our ptrol price has been artificially depressed by the government, energy costs will likely continue to increase.  Added to this is our tourism sector is unlikely to expand with inbound not likely to increase as rapidly as desired , also strong chance of significant increase in kiwis leaving. Also likely continued increase in mortgage rates taking discretionary spending out of the economy.

Sometimes, I think that I understand what inflation is, today not so, not when stagflation is confounding.

What does it mean for the layman.

Stretch your dollar in the supermarket, budget at the pump.

Buy a house or sell your house- don't have an answer.

Trade in for a smaller car or opt for public transport.

Invest in Kiwisaver or not.

Our dollar will depreciate if our real interest rate viz. major currencies falls.  So if the US is jacking up real rates and fighting inflation and we're not doing the same then a NZD devaluation will occur.  Covered interest parity I think it is called.

"Sadly, the previous “best health response is the best economic response” mantra from our Prime Minister is wearing thin on most as our Covid death rate turns out to be no lower than other countries who were less severe with lockdowns on the public and the business sector."

Got a source for that?  Didn't think so.  Maybe stick to getting your predictions on the NZ dollar wrong ...

NZ$ is low because so is our leadership. I have to go back to Rawlings to find worse.