HiFX's Dan Bell looks at why the US fiscal cliff may send the NZ$ lower, NZ's higher than expected unemployment and Japan's 1st current account deficit in 31 years

HiFX's Dan Bell looks at why the US fiscal cliff may send the NZ$ lower, NZ's higher than expected unemployment and Japan's 1st current account deficit in 31 years

Here's our weekly currencies outlook and review with HiFX's Senior Dealer Dan Bell including a look at the "fiscal cliff" in the United States and what this might mean for the Kiwi dollar, New Zealand's surprisingly high unemployment, and Japan's first current account deficit in 31 years.

Hot on the heels of Barack Obama's victory in the US presidential election this week, investors' thoughts quickly turned to the impending fiscal cliff, which refers to US$607 billion in tax increases and spending cuts set to be implemented in 2013 starting in January.

"The US Budget office estimates that if they don't sort out the fiscal cliff, it will send the US economy back into recession," says Bell. "So it's serious stuff. Investors are obviously very concerned about it. Concerned because they've seen how close the election in the US was and ultimately the Republicans and Democrats seem to be at loggerheads and it's going to be difficult to get a compromise to get through it."

The elections have left Obama, a Democrat, as president, a Republican majority in the House of Representatives, and a narrow Democrat majority in the Senate. See more on the fiscal cliff in this article from Harbour Asset Management's Christian Hawkesby.

US equity markets are now sitting around three month lows since a peak in August and the S&P 500 index has fallen through a key level of support at around 1,400, having rallied about 34% from October last year.

"From a technical trading point of view it's starting to look very fragile and looking likely that we're going to see further downside there. That risk aversion is also showing up in the New Zealand dollar," Bell says.

The weakening of the Kiwi comes as the greenback benefits from a safe haven flow when investors' are risk averse, even though on this occasion the concerns stem from the US itself.

"So despite the fiscal cliff situation, originating in the US economy, investors are still buying US government bonds as a safe haven asset because there's not a hell of a lot of other choices out there to be honest.

"It wouldn't surprise me to see further weakness in the New Zealand dollar despite some of the technical analysts being quite bullish the Kiwi longer-term," adds Bell. "I think in the short to medium-term, over the next few months, we've got a lot of uncertainty and a lot of risk on the table, which will probably see the Kiwi under a bit of pressure.'

A "risk off" scenario was likely to dominate in financial markets until a resolution of the US fiscal cliff issues. Central bank stimulus has boosted sharemarkets with the US Federal Reserve's quantitative easing (QE), or money printing, and the European Central Bank (ECB) running its own version of QE. The ECB last night left its benchmark interest rate at a record low of 0.75%, but no fresh stimulus was announced.

"It looks like they (the ECB) are just going to see how things play out there. And as far as the Fed are concerned, if things get worse in the US you'd imagine they're going to start printing more money," Bell says.

"So on the one hand you've got the potential for more QE out of the US, which will be negative for the US dollar, but in the short to medium-term I think risk aversion will be a bigger issue, which is going to have a bigger impact."

(In the chart below the black line represents the S&P 500 and the blue line the New Zealand dollar). 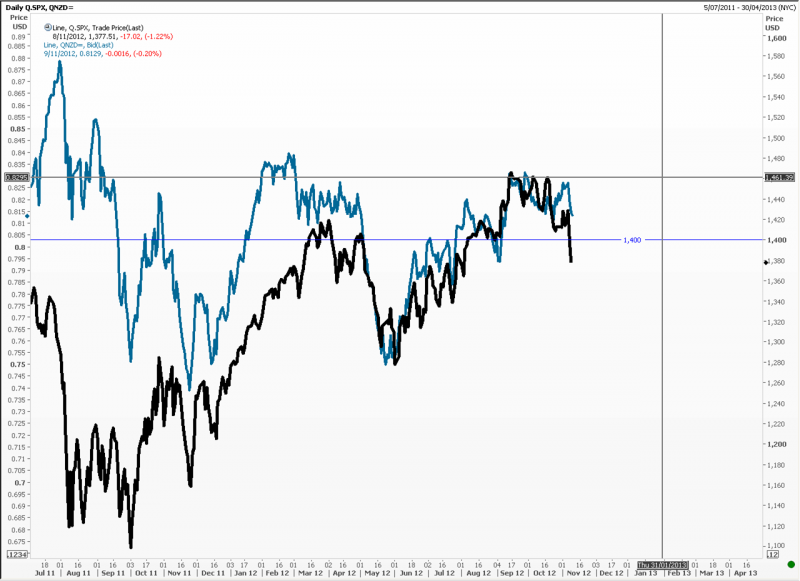 NZ unemployment 'bit of a shock'

Meanwhile, Statistics New Zealand data out yesterday showed unemployment rose to 7.3% during the September quarter, its highest rate since 1999. Economists' had been expecting a rate of about 6.7%.

"It was a bit of a shock really," Bell says. "No one was expecting such a big increase in the unemployment rate, up half a percent. Expectations were 6.7% so not good news for the New Zealand economy. The New Zealand dollar lost a good half a cent against the US dollar in response, and was down about a cent against the Australian dollar in the last 24 hours. The Australians reported their own employment figures yesterday , which came in a little bit better than expected (steady at 5.4%), which was a bit of a surprise."

The New Zealand dollar has subsequently dropped from 12 month highs above A80 cents to A78c. And people are again speculating on whether the higher than expected New Zealand unemployment rate could see the Reserve Bank cut the Official Cash Rate from its record low of 2.5%.

"Most economists locally still don't think the Reserve Bank will cut rates. It's getting very tricky for them. Obviously we've got a housing market, which is starting to take off again, but we've got an economy that really isn't getting enough momentum to justify hiking interest rates. So they've got a tough job ahead of them."

In an interesting, and potentially significant piece of news out of Japan, the country has posted its first current account deficit, on a seasonally adjusted basis, since 1981. The current account, measuring the difference in value between exported and imported goods, services and interest payments, fell to a deficit of 142 billion yen (about NZ$2.18 billion) in September from a ¥720 billion surplus in August. It was the first deficit since March 1981.

Bell says this development is "quite remarkable" given Japan has had such an export led economy for 30-plus years.

"It has been earning a lot of income from its exports, which has been helping it to fund its own deficit. Japan has one of the highest government debt to Gross Domestic Product ratios in the world, at over 200%. But because they have always pretty much run a current account surplus, or at least for the last 20 to 30 years, that has been okay. So they've had enough money coming in and they've got high savings rates on the household and business side to fund that."

"So there's some interesting implications for the Japanese economy if that (deficit) continues. There was some mention of a significant drop in exports to China. As we know China and Japan are having a few issues around territorial disputes at the moment, so depending on how that plays out - and we know that China's got a change in their leadership being discussed at the moment - Japan has got a few issues on its plate with its ageing population and this whole global growth cycle continuing to remain sluggish. (Meaning) they (Japan) are in a little bit of a difficult patch."

Dan Bell is the Senior Dealer at HiFX, a UK-headquartered foreign exchange dealer with significant operations in Australia and New Zealand. It has a dealing room in Auckland. See more detail here.