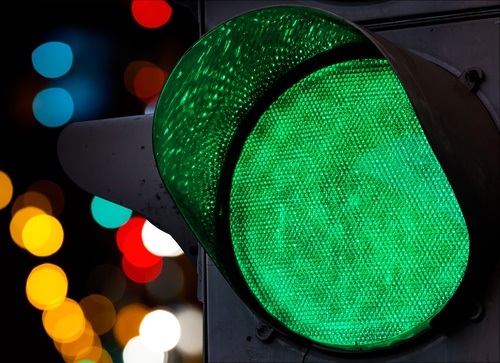 Traffic lights. Detest them. Anybody who's spent any time living in Auckland (does it have the worst-phased lights in the world?) will tend to hate them to the power of three.

Anyway, I remember a conversation with a friend many moons ago. She had occasion to drive her younger sister around a fair bit and disclosed that said younger sister had the not entirely endearing habit, when seeing the traffic lights change from red, of immediately informing the driver (who had presumably hesitated for a nano-second before going): "It won't get any greener you know!"

So, in the sense that we can all currently be seen as waiting in a rather large car being driven by US Federal Reserve Chair Janet Yellen, I would say from my lofty position in the front passenger seat (on the right hand side of course): "C'mon Janet, it won't get any greener!"

I am naturally fairly leery of employment statistics, given that the method of sampling tends to throw up 'rogue' results too often for my liking. Therefore I am disinclined to believe that the US October employment figures were really THAT much better than the figures from the two previous months. More likely that the two previous months' figures understated employment growth and the latest month has overstated it a bit. But if you 'smooth' the figures across the past three months then this suggests an acceptable level of employment growth and, yes, a 'green light' to the Fed making its breathlessly awaited interest rate hike.

Now anybody who lives in a place with well-phased traffic lights will know that if the American lights have gone green, then ours should go red.

So, while nothing in life is certain, the events of the weekend suggest that the Fed most certainly now will raise rates on December 17 our time and our RBNZ will extend its "watch and wait" period and leave our Official Cash Rate unchanged at 2.75% when the next review takes place on December 10.

I said recently I thought the RBNZ was unnecessarily gambling everything on a December rise in US interest rates. Well, it looks as though the gamble has come good.

It is to be expected that the NZ dollar, having looked keen to take flight again, will now be held down first by the expectation of a December US interest rate rise and subsequently as a result of that actual rise. The RBNZ will therefore feel confident about being able to pause, believing that what it has already done, plus the impact of the US moves, will enable inflation to flow through here and start to rise toward the levels the RBNZ needs for the Governor to be complying with the Policy Targets Agreement he has with Finance Minister Bill English.

So, that's what I reckon will happen. Is it what should happen?

The Fed has given a Bigger than Ben-Hur build-up to the possibility of rate rises and in doing so painted itself into a corner. For what's left of its credibility it now has to move rates up in December on the basis that, given what it has said in the recent past, if it ain't going to hike in December, when is it? But that still doesn't mean that moving rates up now is necessarily the right thing, notwithstanding how much the Fed wants the world to get back to 'normal'.

If things such as oil prices start to move against (IE down) the Fed, then there's a possibility the current growth seen in the US might start to stall. It's no one-way bet that this move up of rates will be a success.

Assuming our OCR is still at 2.75% going into next year, any sign that the US rate rise is not going to stick will leave us looking rather out on a limb. Much needs to happen for NZ inflation to spike to the levels the RBNZ is expecting. In that regard the recent bulletin article put out by the RBNZ looks suspiciously like a central bank getting its excuses in early.

If inflation does not kick up the way the RBNZ is picking then it is going to come under pressure before the middle of next year to start pushing interest rates down again - or else throw itself at the mercy of Bill English over not meeting its inflation target.

One way or another I would expect the whole issue of monetary policy and inflation targeting to get a serious re-examination next year because it's becoming clearer by the day that the monetary policy framework as laid out in the RBNZ legislation - some 26 years ago - no longer fits the economic circumstances and imperatives of today.

Fascinating times are ahead.

I can confirm that Auckland does NOT have the worst phased lights in the world - I have lived in US cities with much worse. I have also lived near a traffic light (in the US) that would deliberately turn red on approaching traffic as a traffic calming device - boy that was annoying!

David Hargraves, you will be eating your words:
"the Fed most certainly now will raise rates on December 17 our time and our RBNZ will extend its "watch and wait" period and leave our Official Cash Rate unchanged at 2.75% when the next review takes place on December 10"

Go on, do tell us what the future holds Yvil. Your comment as it stands offers no insight or value.

The world economic system would seem better off with liftoff from the Fed, even if any required monetary surplus still required might come in different ways. If the Fed does, then the RBNZ would seem best not dropping further, even if the 2% inflation target still seems an illusory target for the foreseeable future. The US election will probably see them with promises at least post election for tax cuts or government largesse or both, so there is likely to be a burst of fiscal stimulus going forwards. Most Republican candidates are indeed pushing tax cut agendas. How they fund that will be intriguing, but I have some expectation it won't be borrowing from foreigners, nor will they want interest rates to collapse again. Alternative monetary options may come into play. And to a large extent what they do will set the tone for the rest of the world including NZ. Regardless we do need to address the current PTA on both targets and tools.

The world economic system would seem better off if the Fed, central banks and government did not manipulate and intervene and were not such a large part of the economic system. There, fixed it for you.