Greedy, cautious or prudent. Any of these words could be used to describe ANZ's decision to pocket 15 basis points of Thursday's 25 basis points Official Cash Rate cut by the Reserve Bank.

But there's no prizes for guessing which of the three words most of the bank's customers would choose.

In its statement announcing the 10 basis points cut to its floating and flexible home loan rates, ANZ said over the past 18 months offshore wholesale funding costs had increased significantly. International volatility had proved to be more than temporary, and these extra costs now need to be reflected in ANZ's lending rates.

The Reserve Bank hierarchy noted the effects of the rise in foreign funding costs was "relatively mild" for banks at the moment, given they're funding only a small share of new lending from overseas borrowing because of strong local deposit growth. And Governor Graeme Wheeler went as far as saying not only should floating mortgage rates drop by 25 basis points, fixed rates should also fall. Swap rates fell sharply after the surprise Reserve Bank move, and as of Friday morning were little changed from our story here from Thursday.

But apart from the wafer thin ANZ floating rate cut, the only bank to move on Thursday was the Co-operative Bank, which dropped its floating home loan rate by the full 25 basis points to 5.45%. ANZ's cuts took its floating rate to 5.64% and its flexible rate to 5.75%.

Other banks are likely to move today (Friday), and in the days to come, as they absorb the Reserve Bank's surprise move and the reaction of their rivals. But ANZ has likely set a trend, at least among the big banks, of not passing the full 25 basis points onto customers.

Are the banks justified in not passing on the 25 basis points cut to their floating rate mortgages in full? Not in my opinion.

As of the end of January (the most recent figures available), the Core Funding Ratio (CFR) across the industry was 86% versus the minimum required 75%, and NZ dollar term deposits were at a record high of $114.609 billion. The CFR requires 75% of the banks’ loan books to be funded by customer deposits and long-term wholesale funding of more than 12 months maturities.

It's certainly true that the global financial markets have been turbulent so far in 2016. Speaking to senior executives from three of the big four banks over recent weeks, Westpac treasurer Jim Reardon said wholesale funding costs were up 20% to 25% year-on-year. ANZ chief financial officer Antonia Watson  said wholesale funding costs were up about 30 basis points since last August. And ASB CEO Barbara Chapman said, whilst ASB was keeping an eye on them, the bank was "not needing to dip in at the moment so for us it's just a watching brief on what is going on."

From ANZ's perspective there's also the Australian Prudential Regulation Authority enforced task of repaying NZ$8 billion to its Australian parent over five years.This comes after APRA last year told the Australian parents of ANZ NZ, ASB, BNZ and Westpac NZ they have until 2021 to reduce their non-equity exposures to their NZ subsidiaries to below 5% of the parent's Level 1 Tier 1 Capital. From ANZ's perspective this means repaying $1.6 billion a year for five years, a significant but not unmanageable task. In contrast Westpac has $1 billion to repay over five years, and ASB "does not expect any challenge." BNZ "currently has no outstanding senior unsecured loans [ie non-equity exposure]" from its parent National Australia Bank.

Just how far the big four have come, in terms of weaning themselves off short-term overseas money, is highlighted by comments from Watson. In an Auckland presentation to visiting Australian analysts and institutional investors last June, Watson said ANZ's liquid assets were sufficient to cover nearly all its offshore borrowing. They would allow the bank to stay out of offshore funding markets for over a year - should the proverbial hit the fan - compared to about six weeks before the Global Financial Crisis.

Asked about this last month she told me this remains the case.

"Absolutely, we've got enough liquid assets to stay out of the market for an extended period of time now. (But) we have all these liquidity ratios that we have to meet now for the regulator. So if we were out of the market for a year and we were eating up our liquid assets, those ratios would come into question so we'd have to be having discussions with the Reserve Bank," Watson said.

In such a scenario it's hard to imagine the Reserve Bank playing hardball.

The low, zero and negative interest rate environments in some countries overseas, and our banks' ability to issue covered bonds, has opened up new funding options for them. Witness Westpac's recent 17-year covered bond. Reardon said of it: "To get that kind of maturity into our book, but only pay what we would pay for a five year transaction, was just too good of an opportunity for us."

So whilst the credit rating agencies still caution about the big NZ banks need for offshore wholesale funding, it's not as big an issue as it once was.

And then there's profitability. New Zealand's major banks remain among the most profitable in the developed world. Here's Standard & Poor's (also see their chart below), which noted the "oligopolistic nature of the (NZ) system."

And here's Fitch: "The majors (ANZ, ASB, BNZ and Westpac) have strong operating profitability; with some of the widest net interest margins and most efficient cost-management relative to international peers."

And the shareholders across the ditch have been doing quite nicely. Combined, NZ's four Australian owned banks paid annual dividends last year of $3.715 billion, equivalent to 84.1% of their $4.415 billion annual cash profit.

Having made hay while the sun has shone for the past few years, there are some signs things may be getting a bit tougher for our banking behemoths. December quarter figures show chunky rises in cost-to-income ratios at ANZ, BNZ and Westpac, albeit off low bases. And we all know about the dire state of play in the dairy sector right now. But the banks, and Wheeler, appear to believe they can cope with this.

So pocketing some, or most, of a 25 basis points OCR cut - right now - is not justifiable. 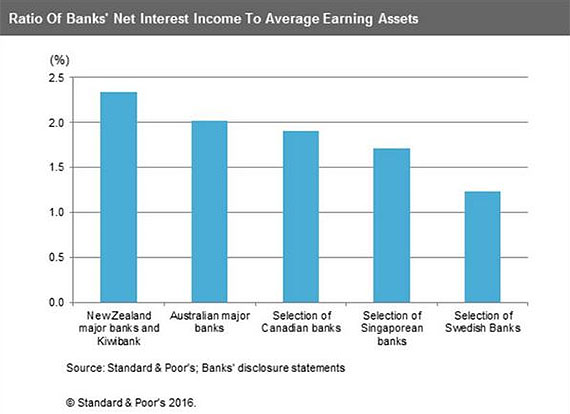 so you say bank's customers are not being treated fairly, obviously you dont consider people who deposit into the bank as a customer and who are not being rewarded for the risk on their money
its always the indebted screaming its not fair, its time the depositors started to scream as loud.

Yes, sharetrader I agree things are getting serious on the savers front. That why I posted this John Mauldin article recently - http://www.interest.co.nz/opinion/80362/john-mauldin-looks-how-central-banks-zero-interest-rate-negative-interest-rate Whilst it's US focused, we're in danger in NZ of slipping into this sort of territory too for savers & retirees.

In terms of last week's OCR cut I don't see it magically producing the inflation the RBNZ needs to get back into its policy targets agreement 1-3% zone. Rather it looks to me that the inflation targeting regime is probably broken and we need some serious debate on what to do about this.

But since the RBNZ did cut the OCR, there must be strong reason for banks not to pass this on in full to floating mortgage rates. And there isn't.

On the saving front, we reported on Friday that Westpac cut most of its term deposit and term PIE rates by between 5 and 15 basis points. Kiwibank cut its Notice Saver PIEs by 25 basis points as has Westpac. Cash management account rates have been falling by 25 basis points also. We'll have more on dwindling savings rates today.

"the inflation targeting regime is probably broken and we need some serious debate on what to do about this." Think I have being saying this for a while, except it cannot be ignored as the issue is dis-inflation and deflation, not "inflation" and its going to get worse.

So vote with their/your feet. The problem is way to few businesses are borrowing as there is excess capacity hence no return.

Obviously the banks are being ethical, as dropping their interest rates would cause house prices to rise!!
And they are useing the profit to reduce their outrageous leverage??
Yeah right...

Over the last 10 weeks over 50,000 mortgage approvals have been granted clearly indicating Kiwis have an appetite for debt in the 4.5% to 5.5% interest rate range. So the banks can get away with keeping rates high as the Kiwi suckers are happy to pay it - they are in a frenzy of activity using the house as an ATM again to buy new cars, renovate their homes, travel etc, etc.
So unless we see consumer pressure banks will get away with record margin levels and billions of profit every quarter.

The National Party government do not believe in looking after citizens over banks. Time they went.

My bank has given me .60 on floating discount for 2 years and has just lowered it floating rate by .20 basis points and its not Kiwibank so there is life after

Perhaps the banks are uncertain about the real value of their loan collateral when it comes to dairy farmers. Bernard Hickey has recently commented in the Herald on the impact of the low pay-out on the value of dairy farms in the future: http://www.nzherald.co.nz/opinion/news/article.cfm?c_id=466&objectid=116...