Westpac economists expect annual house price inflation will peak at 20% later this year, 'which is not an environment conducive to further OCR cuts'

Property
Westpac economists expect annual house price inflation will peak at 20% later this year, 'which is not an environment conducive to further OCR cuts' 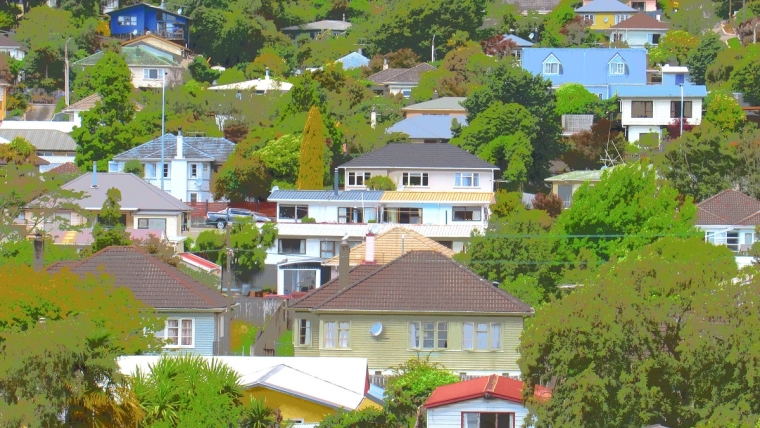 Westpac economists have joined what now appears a surging tide of economists no longer expecting the Reserve Bank to cut official interest rates this year.

Not very long ago at all the broad expectation in the marketplace was that the RBNZ would early this year take the Official Cash Rate down from the current 0.25% levels into minus territory.

But that expectation's slipping away fast in the face of much better than expected economic figures and the steaming hot housing market.

And indeed, Westpac's chief economist Dominick Stephens, in predicting that house price inflation's going to peak at 20% (from a pick of 16% previously), has cited the surging house prices as a significant part of the reason why he's no longer picking two cuts to the OCR this year.

"We expect annual house price inflation will peak at 20% later this year, which is not an environment conducive to further OCR cuts," Stephens says in an OCR forecast update.

Other economists to move away recently from expecting a negative OCR have included those at ANZ, who now see just one further OCR cut to 0.1% in May. And global independent economic researchers Capital Economics forecast earlier this week that the RBNZ will actually start raising interest rates again in the second half of 2022.

Westpac's Stephens says he now expects that the OCR will remain on hold at 0.25% "for the foreseeable future".

"Previously, we were forecasting two cuts of 25bps in May and August this year, which would have taken the OCR to -0.25%."

In explaining the reasons for the change in call, Stephens cites the much better than expected recovery in the GDP, disruptions to global supply that might boost inflation as well as gains in oil and other commodity prices - and the rising house market.

Stephens says the housing market "has outstripped even our very bullish expectations".

As well as now predicting a peak in house price inflation of 20% later this year, up from the previous pick of 16%, he's now picking that for the whole of 2021 house prices will rise 15%.

"The reason for this surge in prices is the sudden drop in mortgage rates engineered by the RBNZ."

The surge in house prices is "particularly important", Stephens says.

"It is now abundantly clear that the RBNZ’s OCR cuts have had a stimulatory effect on house prices. In time, the buoyant housing market will stimulate consumer spending and inflation. The impact of monetary policy on house prices has proven far more potent than the RBNZ anticipated.

"Now is a time for the RBNZ to sit back and observe how the stimulus it has provided translates from house prices to the economy and then to inflation, rather than to cut further. It just does not seem likely that the RBNZ would cut the OCR amid 20% house price inflation."

Stephens says that "as always", there are two-sided risks around Westpac's new forecast.

"Should inflation and employment prove stronger or weaker than we currently anticipate, the OCR outlook would be adjusted up or down accordingly. In particular, we continue to regard a negative OCR as a perfectly viable policy option for the RBNZ. If the data unexpectedly turns in a more negative direction, the RBNZ would not hesitate the lower the OCR below zero."

Stephens continues to expect that the RBNZ will gradually taper the pace of Government bond purchases over the course of the year, from the recent average of $800 million per week down to around $500 million by the end of the year.

I dont know so much if WP are right they could be. Its a forecast not a pre-announcement

Speculators yes, they come on board for a quick buck... fix the market and the speculators will disappear.

So another twenty percent this year....

Time for the young to get up to army surplus, watch a few Hong Kong protest videos for ideas and let the rocks fly I say

It appears New Zealand will leave them few other options, whether they want to or not. That's what passes for "kindness and unity" these days.

They should rally up some young buck lawyers and throw a massive class action case against those responsible. NZ can set the example for the rest of the western world to follow. It'll be tough going though, biting clean off the hand that feeds.

Yes they could video themselves trying to overthrow the government... or like the ones who even gave their names to reporters.

I'm calling it now. Their predictions will be wildly wrong.

Geniuses eh
Inflation coming now they say
No shit Sherlock
Freight inflation might have prompted that view 6 months ago. Plus inevitable bow wave of economic drop about to hit world economy including, yes, NZ

Seems inevitable.
So wise one's out there...what will Mr Orr do when he has more inflation than he bargained for and no ability to put up interest rates?

Print like there's no tomorrow? But that'll be fuel to the fire will it not?

They’ll cut and QE if they need to.
The big takeaway is market intervention is here to stay, risk is no longer a consideration, price discovery is inflating rapidly due to these favourable factors. Oh ...and herding people out of bank savings by the RBNZ is working a treat.

Oh ...and herding people out of bank savings by the RBNZ is working a treat.

Audaxes, is there even such a thing as an ‘unsuccessful’ residential property vendor in NZ?

Recall though that the definition of inflation the reserve bank chooses to target, CPI, is very narrow and not really a reflection of wider inflation within our economy. The Reserve Bank have voluntarily blinkered their measure of success. My view is that as long as CPI stays at the low end of their band they will continue to send a Tsunami of liquidity.

Did Westpac tell ANZ? they dropped their rate to 2.29%

another 20%, the liquor stores will be running out of the "good Stuff", have to start popping beers.

Even considering the irresponsible behaviour and shortsightedness of the current clowns at the helm of the RBNZ, I see an OCR at 0.75% or even 1.00% a very distinct possibility by end of next year.
Orr is like a headless chicken panicking at any unforeseen signal that the markets happen to send him: he might just panic at the first unexpected signs of inflation over the desired levels, in the same way as he has panicked at the remote possibility of deflation.

exactly right. And that panic will trigger a whiplash like no other, the 20% gain will turn to a 30% drop which will clean out all the FOMO buyers of the last 9 months as they suddenly find they are underwater and competing with all the others to exit their position.

..alternatively massive money printing, inflation to the moon and hard assets the only shelter.

No way. I'm prepared to place a big wager on that NOT happening.

The consumer spending stimulated will be plane tickets across the tasman and away from this ponzi hellhole that Ardern and Orr have cooked up.

Still wouldn't bet against a negative ocr. An outbreak of this more contagious covid strain and we are back to lockdown...

This government, full of bullshit rhetoric on addressing inequality, should hang its head in shame.
Each day inequality is worsening as house prices rise, yet the urgency just isn't there.
I actually think it's bizarre.

Agree Fritz, it's utterly bizarre. But the voters wanted a smiling, shiny happy person, not one with policies. John Bishop's stuff article puts an interesting spin on it... he thinks she's not taking action not because of votes (I disagree with that), but because she genuinely doesn't have a clue what to do. No ideas, no vision, no plan, totally out of her depth (I agree 100%). If not for covid what would she have? Nuthin.

I think it's a bit of both actually.

I agree that she is no visionary!

What exactly can they do apart from some heavy handed policies against investors that will only drive up rents further. They don’t control interest rates and they couldn’t keep them where they were otherwise our dollar would have rallied and our exports would have been fecked.

There is a lot of bleating and understandably so but you can’t blame this on the government.

They could have changed the Reserve Bank Act.
I also understand there is scope for political intervention.
They could have extended special housing areas which were having an effect between 2015- 2017 in flattening prices. Twyford said no because it was an initiative of the previous government...he put petty politics ahead of NZ's interests.
They could have introduced a capital gains tax.
And they could have abolished urban growth boundaries, something that was an election promise a few years back, another broken promise...

I agree. They should increase the deposit requirements for investors. Heck, why not make it 100% ?!? That would reduce demand!

Raving socialist metamorphised to capitalist ... JA but also the rest

Just another bank, trying to talk up interest rates.